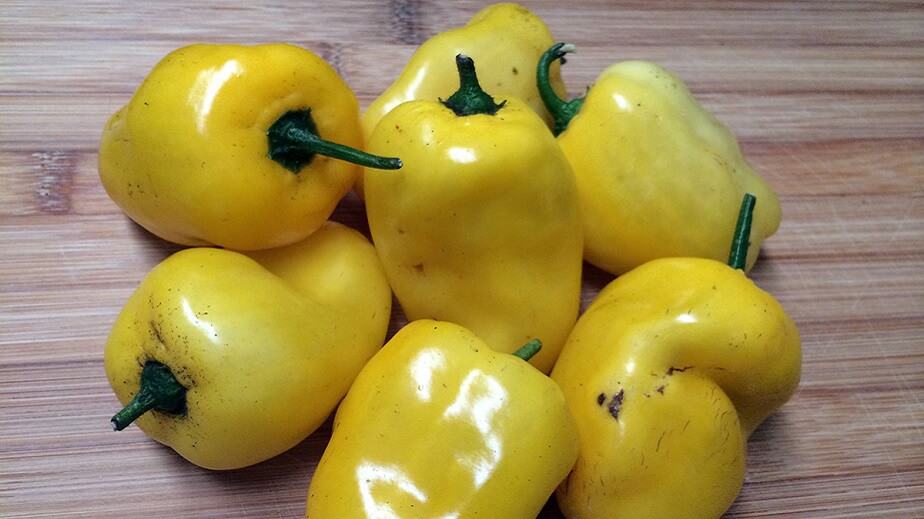 The Peruvian rocoto resembles a small bell pepper but spicier. It’s a thick and juicy pepper suitable for stuffing (Rocoto Relleno), for adding to scrumptious egg dishes, on a pizza, or to any dishes that need to be hot and crunchy. Rocoto pepper is unique with purple flowers and black seeds instead of the usual white; also belongs to Capsicum pubescens species, a rare variety of peppers. This article explores all the important details on rocoto.

TABLE OF CONTENTS
What Are Rocoto Peppers?
Rocoto Peppers Scoville – Heat Level
What Does It Look Like?
What Do Rocotos Taste Like?
Culinary Uses
Buying And Storing
Manzano Peppers Vs. Rocoto Peppers
Other Varieties Of Aji Peppers

What Are Rocoto Peppers?

Rocoto pepper has its origin in the Andes Mountains of Peru where it can survive the mild frost and cooler temperature; no need for heat and sunlight to thrive, unlike most other peppers. In Peru’s Andean highlands and certain mountainous regions of Bolivia, this pepper has been grown for over 5,000 years but it’s now grown in many places in South America from Ecuador to Chile. This meaty pepper forms the basis of several Peruvian cuisines and condiments like traditional Rocoto Relleno to rocoto ceviche.

Originally, it was known as rukutu luqutu in English and is also often referred to as rocoto pepper. Rocoto has all the characteristic features of miniature bell pepper for its meatiness and juiciness. In fact, it looks more like a tomato than pepper but is set ablaze with incredible heat.

Cultivars include pear-shaped Peron, yellow-colored Canario, and Rocoto Longo from the Canary Islands.

Key Facts In A Gist:

Their appearance like a peach or tomato is totally deceiving when it comes to the heat. The medium heat level of rocoto is really surprising. Not just medium but it borders on the extra hot category of peppers like Scotch Bonnet and Habanero.

Rocoto pepper’s heat level ranges between 30,000 and 100,000 Scoville Heat Units (SHU). This pepper can be 6 to 40 times hotter than the common Jalapeno pepper. Manzano chili, the close cuisine of this pepper, has much lower heat ranging between 12,000 and 30,000 SHU. Beware; rocoto isn’t a child’s play for mediocre chili fans. 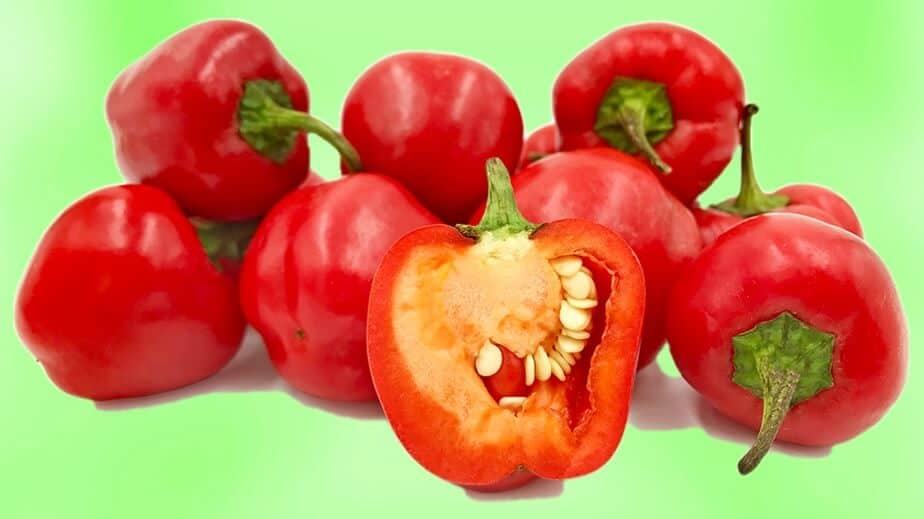 Different from other peppers, the rocoto plant has silky hairy leaves and purple flowers which double as an ornamental pepper plant. They can grow to a height of fifteen feet with several small branches spreading all around; something similar to a large grapevine plant. Andean climate with cooler temperatures is the ideal condition for prolific growth and yielding.

Typically, it looks like a small tomato in hues of red, yellow, or orange and even the inner part of rocoto looks like a tomato that is meaty and juicy. Strangely, this pepper has dark brown to black seeds. It’s a unique chili experience, both to see and to eat.

The flavor of rocoto pepper is a mixture of the nuances of bell pepper, the meaty juiciness of tomato, and the heat of the habanero. The grassy freshness of this pepper is amazingly refreshing and also it mellows down its burning heat. The fleshy inner membranes are crunchy and luscious which is more like a fruit than a vegetable. On the whole, it has all the qualities of bell pepper but really hot enough to bring tears rolling down your cheeks.

Rocoto chile is a critical ingredient in several traditional condiments and dishes in Peruvian and Bolivian cuisines. The fleshy and juicy texture of the pepper is truly versatile and can be easily integrated into most hot and saucy vegetable dishes. Rocoto paste and sauces are very popular in Peru also it’s a wonderful addition to salsas, hot sauces, stews, and other juicy dishes. In Peru, this pepper can be found stuffed with a delicious ground beef mixture such as Rocoto Relleno.

This pepper doesn’t taste good when dried because of its juiciness. Also, you cannot use it as the bell pepper for stuffing despite its thick walls. Instead, use them for baking and roasting or use the chopped fresh peppers in salads. Sautéing it with marinated chicken, vegetables, or corns tastes good.

Fresh rocoto peppers are rarely available outside their main growing regions in South America. You’ll also not find the dried or powdered version of it for this juicy pepper isn’t fit for drying. Instead, you may look for frozen peppers or rocoto paste that is available with online vendors; brands such as Belmont, Inca’s Food, and Doña Isabel are most common. For a better solution, purchase the seeds and grow this pepper in your garden and it grows well, especially in colder climates.

If you have got the fresh rocoto peppers store them in the refrigerator and they’ll stay good for a fortnight. Even the green peppers you buy will turn yellow or red within a few days if not stored properly. If you want to keep them good for a few months then store them in sealed jars in a frozen condition.

Often, many people mistake these two peppers, especially those who are not very well familiar with them. They both belong to the Capsicum Pubescens species and share the same characteristics like black seeds, meaty and fleshy walls, and similar types of plants. These two are the most widely cultivated species of C. pubescens. Manzano pepper looks like a miniature apple while rocoto looks more like a pear. The single biggest difference between them is the heat level; rocoto is five to eight times hotter than Manzano.