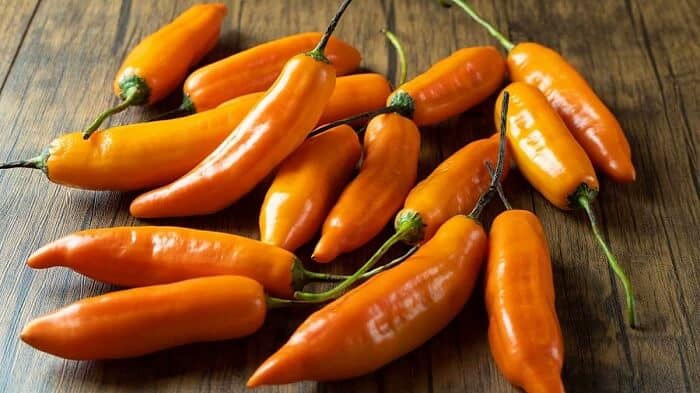 In this article, you’ll learn in detail about this yellow chili which has been a staple of Peruvian cuisines for centuries. Officially, it is named the Peruvian pepper and is the part and parcel of Peruvian hot dishes and everyday cooking.

What Is Aji Amarillo?

The aji amarillo chili is a medium-hot South American pepper with vibrant orange-yellow colored skin and fruity flavor. For its unique color, in the whole of America, this pepper is appropriately known as “yellow chili.” It’s widely grown in Peru and is traditionally used by the Incas in a wide array of Peruvian dishes. In fact, it’s still the numero uno chili pepper in that country.  This chili is easily available Peruvian market in different forms like fresh, dried, ground, canned, frozen, and chili paste.

In Peruvian cooking, yellow chili is a crucial ingredient in several regional recipes from salad toppings to hot sauces.

From a nutritional point of view, this pepper is an excellent source of vitamin C and minerals like potassium and copper.

Yellow Chili Facts In A Gist

It’s a member of capsicum baccatum, one of the five species of all edible chilies. It’s basically a Peruvian chili though they are cultivated in a few places elsewhere in South America. Traditionally, yellow chili is part of the “holy trinity” in Peruvian cooking, along with red onion and garlic.

According to Peruvian folklore legends, this chile has first cultivated in Peru in 2500 BC, and the pepper still remains primarily regionalized in Peru. On a limited scale, today they are cultivated in a few countries outside Peru that including South and Central America, the United States, Hawaii, Australia, and a few places in Asia.

By the way, Capsicum baccatum is one of the rarer domesticated species within the Capsicum genus. Also known as Aji Escabeche, this pepper is lower medium-hot chili and is mostly available in the fall.

How Hot Is Yellow Chili?

A frequently asked question is aji Amarillo hot? On the Scoville Scale, the heat level of this chili Scoville ranges from 30,000 to 50,000 Scoville Heat Units and 40,000 SHU on average. It’s right at the bottom of medium-hot chilies on the Scoville Scale. Of course, it isn’t mild as to merely be a simmer and not so hot as to turn off all. Its heat is tolerable to most people and does not have enough punch to bring your tears rolling down the cheek.

The well-known Serrano pepper typically matches its Scoville. Cayenne and tabasco chilies do have a similar heat profile as this Peruvian chili. Compared to the familiar Jalapeno pepper, yellow chili is up to 10 times hotter.

The name “yellow chili’ denotes its color, a rare pigment for chilies in general. However, the chili changes from yellow to a fiery orange on maturing. Size-wise, it grows to four to five inches in length with a moderately slim body and thick juicy walls. To describe it further, this pepper is elongated, slightly curved, and is tapered with an oblong shape. Beneath the skin, the flesh is faint orange, crisp, and aqueous and its central cavity is filled with porous membranes and flat, cream-colored seeds.

What does aji amarillo taste like? This Peruvian chili has a splendid blend of mixed flavors that include hints of tropical fruits, and mildly raisin. Its taste has a close affinity to fruity scotch bonnet though yellow pepper to more bright in taste. On the whole, the enjoyable fruity flavor, raisin-like aroma, moderate heat, and broader shape make this Peruvian chili an excellent addition to a variety of recipes and cooking styles.

Aji Amarillo spice is an unavoidable part of several Peruvian common dishes like papa a la huancaína, aji de gallina, as well as causa rellena. Sauces with this pepper not only have a bright complex flavor but also a distinctive orange/yellow color. Often used in seafood dishes, combined with root vegetables, and added in ceviche. Fresh yellow chilies are well utilized in everyday Peruvian cooking, especially in stews, sauces, and soups. You can use them raw or cooked dishes like simmering, roasting, grilling, boiling, and stuffing. Chopped raw peppers are a nice addition to salsas, also use them sliced and tossed into salads; or add pureed chiles to hot sauces and pasta. Aji chili peppers pair well with poultry, pork, beef, fish, potatoes, beans, goat cheese, mango, rice, and many more.

Where Can You Buy Aji Amarillo?

Fresh Aji chiles are easily available at vegetable markets in Peru and in most other South American countries, especially in the harvesting season of autumn. In North America, occasionally you may find them with Latin grocers. If the fresh yellow chilies aren’t available in your area, buy the Aji Amarillo paste and dried chilies from the online shops. You can rehydrate the dried chilies to retrieve most features of the fresh; rehydrated chilies work great in marinades, stews, and sauces.  A permanent solution is to grow your own aji chiles; it grows best in a warm climate.

It is a rare pepper to be found outside South America. If you’re unable to trace this pepper here are a few aji amarillo substitutes worth trying:

Scotch bonnet is a lot similar to yellow chilies in color and fruity flavor. This pepper works well in most recipes that call for Aji Amarillo chiles but being a hotter pepper (100,000–350,000 SHU), use it in very little quantities. Also, scotch bonnet chili paste is a good Aji Amarillo paste substitute.

Habanero pepper is hotter than yellow chilies, yet both of them have a similar appearance, flavor profile, and culinary uses. The fruity flavor of habanero gives you the same feel as Aji Amarillo. Be mindful of the heat of Habanero which ranges between 100,000-350,000 SHU against the average 40,000 SHU of Peruvian chili. In a lower quantity, you may use habanero as a replacement for aji pepper in salsa, hot sauces, soups, and fruits based recipes.

Serrano pepper is another good alternative to aji chiles, especially for those who love a miler variety of pepper. The heat level of serrano pepper ranges between 10,000 to 23,000 SHU which is just half the heat of the Peruvian pepper. To your displeasure, you’ll not find the fruity flavor of aji pepper in serrano.  If you cannot find serrano, cayenne and Tabasco are other peppers similar to it.

Manzano chili, comparatively a sweeter pepper with a Scoville ranking ranging from 12,000 to 30,000 SHU, is another good swap of yellow chilies. It works well in sauces, soups, fruit juices, and vegetable dishes.