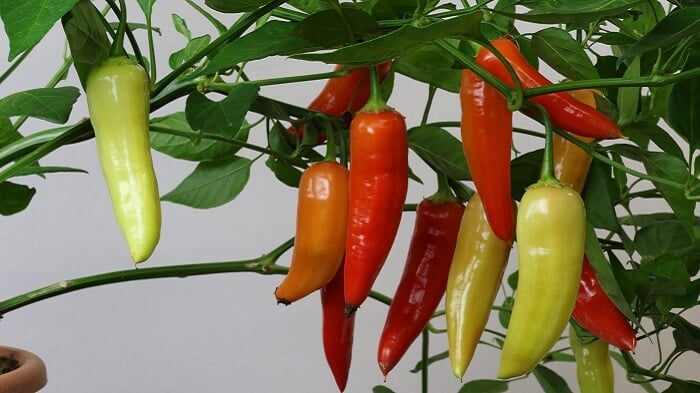 TABLE OF CONTENTS
What Is Aji Cristal?
Origin And Plant Features
How Hot Is The Aji Cristal?
Aji Cristal Appearance And Flavor
Uses In Cooking
Other Varieties Of Aji Peppers

What Is Aji Cristal?

Aji Cristal peppers, similar to Aji Amarillo, are moderately hot chilies originating from Curico, Chile. Like other aji peppers, this chili is also South American specialty produce. Thus, its uses in cooking are limited to local cuisines in Chile and neighboring regions. In fact, it’s mostly grown in the Curico, a city in central Chile’s Maule Region, an area known for its wineries. It isn’t a commercially grown chili but popularized by small farmers selling the pods.

Aji Cristal is believed to be originated in Curico, in Chile. It belongs to the Capsicum baccatum species of chilies. The plant easily grows in warm and arid climatic conditions typical to most regions in Chile. Usually, it yields the best harvest towards the end of summer but farmers follow staggered farming and harvesting to ensure a year-long supply of fresh chilies.  On average, ninety days is required for a newly grown plant to yield mature peppers.

Aji Cristal, native to South America, is believed to have been in cultivation and use for thousands of years. Aji peppers from South America were made popular by the Spanish and Portuguese who brought them to Europe and their colonies in Asia and Africa.

How Hot Is The Aji Cristal?

Aji Cristal is a moderately hot pepper which measures 30,000 Scoville Heat Units on the Scoville Scale. The heat level of this pepper is somewhat similar to the familiar cayenne and tabasco peppers. In comparison to Jalapeno, which averages 5,000 Scoville Heat Units, Aji Cristal is about 6 times hotter. By the way, chilies between 2k to 50k SHU are considered mild hot peppers; they have enough punch to make your dishes moderately hot but never overwhelming or unbearable.

Aji Cristal peppers grow to the size of about 3 to 4 inches long. They are thicker and wider at the stem and taper to a smaller, round end. Initially, they start growing light green in color and then gradually change to yellow and finally vibrant orange-red on maturing. Like other Aji peppers, it has a medium-thick texture and is somewhat waxy.

Cristal peppers taste good but the flavor varies depending on the stage of growth. They are mildly hot with a fruity and citrusy flavor. Fresh peppers are crunchy and have a mild grassy aroma. Mature peppers are more flavorful and hot than tender ones. Usually, fresh Aji Peppers are commonly used in cooking because of their fruity flavor.

Aji Cristal is a quintessential part of an authentic “Pebere”, a famous Chilean condiment. Chilean Pebre is the counterpart of the popular Pico De Gallo in Mexican cuisines. Pebre, made with base ingredients like Aji peppers, olive oil, cilantro, and garlic, is amazingly delicious when used as bread-spread or with meat. Cristal peppers make tasty pickles, especially when made with ripened orange-red peppers.

Use it like any other peppers in cooking as part of your main dish or as a flavor base like Mirepoix. Like other Aji chilies, it’s excellent for spicing up soups, sauces, and stews. The vibrant color and mild spicy heat make this pepper a fantastic chili for making fresh salsa. Also, dehydrate this chili and grind them into chili powder or flakes.