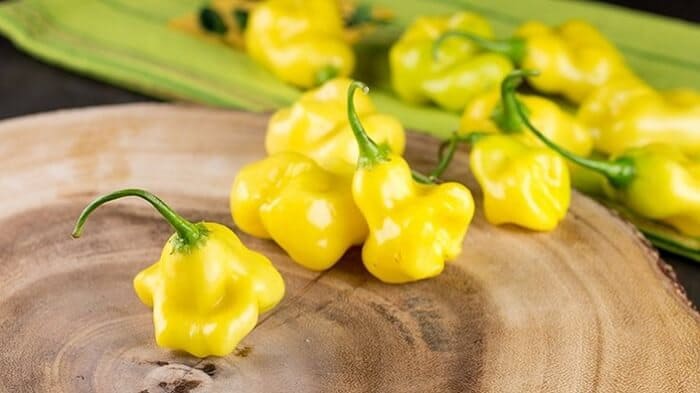 What is Aji Fantasy Pepper?

Aji Fantasy peppers, botanically classified as Capsicum baccatum, are a hybrid variety of chili that was developed in Finland and belongs to the Solanaceae or nightshade family. It grows on a small plant but prolific shrub that reaches up to one meter in height; highly productive and yields hundred of chilies in every season. The pepper pods are the size of habanero pepper and ripen to attractive bright yellow or white color.

Mainly there are two distinctive types of Aji fantasy peppers; Aji Yellow Fantasy and Aji White Fantasy Peppers. They are distinct varieties created by two different breeders. At first, the yellow pepper was created by the commercial grower Fatalii Seeds in Finland. However, the white pepper is the natural mutation discovered by Peter Merle, a chili grower in the Canary Islands, just off the coast of Morocco. Color is the only noticeable difference between these two varieties of Aji Fantasy peppers.

As per records, the yellow fantasy pepper is a cross between Aji Lemon Drop and a Brazilian Baccatum variety of pepper. Today, you’ll find several improved variants of both white and yellow fantasy peppers cultivated and seeds sold by online seed vendors and specialty farms in Europe, North America, and Australia.

They are small, wrinkled, and size-wise averaging 7 to 9 cm in length and 6 to 6 cm in diameter. These bell or hat-like-shaped round peppers grow in a downward-facing position. The color changes from whitish-green to yellow or pale white on maturing. When matured, the wrinkled skin is smooth and firm and is typically harvested at this stage. Beneath the creased skin, the peppers contain thick-walled flesh that is pale white to yellow and the central cavity is filled with tiny flat, white seeds and white membranes.

Aji Fantasy peppers have a sweet and tangy, fruity taste with mild heat. While taking a bite, you’ll get the feel of a crispy and juicy texture.

These peppers are rich in vitamin C and A; contain a variety of antioxidants and other properties useful for collagen formation in the body. Like most other chilies, they contain a good bit of potassium, iron, potassium, and magnesium.

How Hot Is Aji Fantasy?

The heat level of Aji Fantasy ranges from 5,000 to 10,000 SHU on the Scoville Scale. At the lowest point, they are as hot as the common Jalapeno and at the higher end, they can equal the heat of Chipotle Pepper and Hungarian Wax Pepper. The heat of this pepper is subdued by its sweet, fruity flavor. Overall, it’s a sweet pepper, emphasis on sweet, with a mild heat level.

The sweet and tangy flavor of fantasy chili is a nice addition to salads, seafood, and vegetable dishes; works well in all types of recipes that call for mild pepper. This pepper can be used raw or cooked in different kinds of dishes such as roasting, boiling, baking, and sautéing. Thinly chopped fresh peppers are a nice inclusion in salsas, garnish, sandwiches, or green salads. Pureed Aji Fantasy peppers is usable in sauces, jams, and stews. In Finland, you’ll find pickled fantasy peppers on sale in groceries in many places. If you aren’t making hot dishes then this pepper will pair well with meats such as poultry, pork, and beef. Also, it goes well with pasta, rice, garlic, beans, onions, or bell peppers.