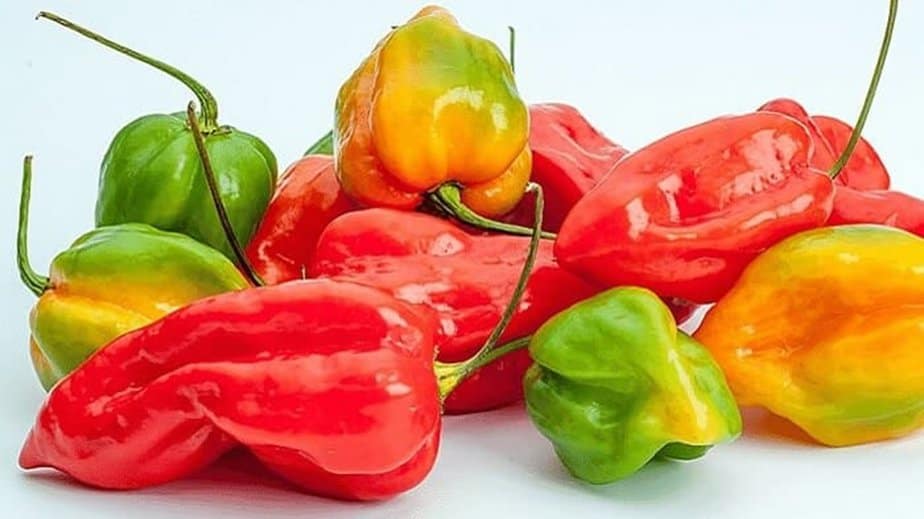 What Is Aji Dulce?

According to various theories, all Capsicum chinense peppers have their origins in the Brazilian Amazon. Studies have established that Native Brazilians brought C. chinense to the Pacific coast, and Spanish colonists took them from what is now Peru to Mexico to their colonies. The hot versions of C. chinense peppers like habanero and scotch bonnet became popular in English-speaking Caribbean islands and other parts of Central America.

Sweet varieties of C. chinense peppers, such as Aji dulce, have gained popularity in Spanish-speaking Caribbean islands such as Cuba, Puerto Rico, and the Dominican Republic.

Today, you’ll find the cultivation and sale of ajíes peppers in many localities in the Yucatan Peninsula area, the Caribbean, and the Northeastern United States.

Apparently, Ajíes look like Habanero peppers, as they both have a similar shape, color, size, and aroma, but the former has only a trace of heat. They are distinguished by their pendant shape.

Even the very same pepper can have different appearances depending on its growing conditions.

The pods can be squat, hat-like, and wrinkled, or they can be oblong to round in shape. On average, this fruit grows 2 to 7 centimeters in diameter and 2 to 10 centimeters in length.

They have straight to irregularly curved shapes with gentle tapering towards the tail end. The skin is medium-thick, glossy, and taut with irregular folds. Dulce ripens from lime green to orange-yellow and then red.

The interior of the chile is crisp and aqueous, encasing a central cavity filled with flat, round, cream-colored seeds.

How Hot Is The Aji Dulce Pepper?

Aji Dulce, true to its name, is a sweet pepper with hardly any significant heat. It’s a mildly hot pepper, with a level of heat ranging from 0 to 1,000 SHU on the Scoville Scale.

Obviously, heat-wise it’s comparable to the Poblano Peppers or Cubanelle peppers. A typical jalapeno pepper, with an average heat of 5,000 SHU, is 5 to 40 times hotter.

Surprisingly, depending on the growing conditions, their mild heat can be as low as 0 to 100 SHU, like other sweet peppers. You’ll also find a cross-pollinated version of ajicito or ajíes peppers, which are hot like habaneros.

This pepper, also known as Aji Cachucha, is an overall sweet pepper with very little heat. The sweet and fruity flavor of organic aji dulce chili is a hearty treat for those who can’t stomach the burning heat of the habanero. Many say the pods are subtly smoky and herbaceous.

The taste is closely similar to that of habaneros, despite the vast differences in pungency.

Their flavor is unusual and complex, with a strong element of tropical sweetness. They’ve smoky undertones and a wonderful zesty flavor that would linger in the mouth for a long.

Some say that the aroma of this chile is like Trinidad perfume with a fruity scent.

How Do You Use Aji Dulce Peppers?

Dulce pepper is a key ingredient in several Caribbean dishes, especially green salads and stir-fries. It’s an essential ingredient for sofrito and many other Caribbean dishes. Often, a tasty blend of minced peppers, onions, and herbs is the heart of Puerto Rican cuisine.

Similarly, in the Spanish-speaking Caribbean islands, this chile is a regular addition to soups, stews, rice, and bean dishes.

Some of the popular recipes with Aji Dulce pepper include Puerto Rican Arroz con Pollo, Sancocho, or Cuban Ropa Vieja and Picadillo.

Being a sweet chile with a fruity flavor, this chile can easily be integrated into most vegetable dishes, both raw and cooked. Cubans use it to flavor mild salsa, paprika, herbal vinegar, and sauces. Dulce peppers pair well with green lentils, beans, culantro, cilantro, parsley, oregano, rosemary, and all types of meat.

What Can I Substitute For Aji Dulce?

If you aren’t living in the Caribbean, finding a substitute for Aji Dulce pepper is inevitable, as this pepper isn’t available, especially the fresh pepper, in most parts of the world.

If heat differences aren’t a major issue for you, the closest Aji Dulce substitute is Habanero, for they are quite the same in color, appearance, and flavor.

Red or orange bell pepper is another great alternative to ají cachucha, as they have the same color and flavor.

You can also use any of the peppers from the aji family, especially the ones that rank very low on the Scoville Scale, such as Aji Panca, Aji Pineapple, Lemon Drop, or Peppadew peppers, as a replacement for Aji Dulce.

How To Grow Them?

To grow peppers, transplant seedlings after the danger of frost has passed. Ideally, transplant pepper plants in an open field or large containers outdoors in full sun, when nighttime temperatures don’t drop below 50 °F.

They have high yields while maintaining the sweet, full flavor. The peppers mature from lime green to red.

There are many different strains of Peruvian and South American aji peppers, and here are the links to some of the most popular ones: