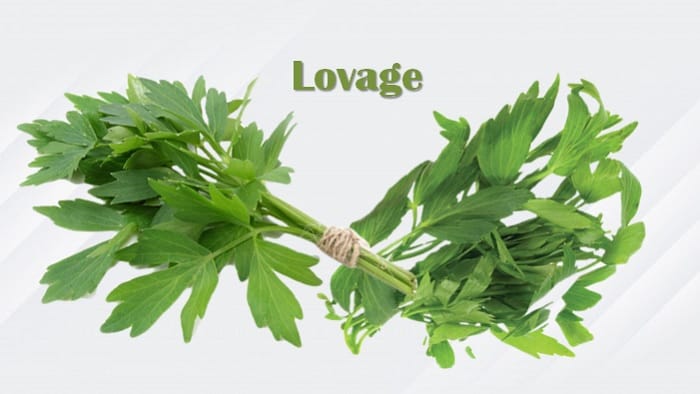 CONTENT
What is Lovage?
What does it taste like?
How is lovage used in cooking?
Best Lovage Substitutes

Lovage, a tall perennial plant, is a Levisticum officinale, and a member of the parsley family. This hardy herb is native to some regions in the southern Mediterranean and central Asia.

Unlike parsley, lovage has thin and long hollow stalks that grow up to 3 to 5 feet. The dark green and shiny leaves have jagged, toothed edges. Towards the end of the season, this herb blooms with yellow flowers followed by yellowish-brown colored fruits.

The leaves, seeds, and roots are all used in cooking. You’ll find several Mediterranean recipes that include lovage. It’s mostly used in recipes for aroma and flavor.

Lovage is low in calories and contains lots of vitamin C like many other green, leafy herbs.

This article examines the best substitutes for lovage, as well as its flavor profile and uses.

In other words, lovage tastes like celery, with undertones of parsley and a hint of anise.

How is lovage used in cooking?

Lovage seeds and leaves are common flavoring ingredients in several European cuisines.  The green leaves are often used for garnishing dishes and salads. It’s a flavorful addition to stews, soups, and savory dishes.

In bread stuffings or casseroles, use the finely chopped leaves and stems.

Just as celery, the leaf stalks can be sautéed, or split into long strips.

The fresh leaves are good for flavoring syrups and herbal beverages like celery soda.

In short, if you love German and East European dishes, then you must have this herb.

To your advantage, lovage leaves do not dry fast and can be stored in the refrigerator year-round.

It isn’t easy to find lovage leaves outside East Europe and some parts of West Asia. Therefore, finding a good substitute for lovage becomes necessary for you, especially when preparing some of the German dishes that call for it. Here are a few good alternatives to it:

If you are not very familiar with lovage, it isn’t easy to distinguish it from celery. The only noticeable difference between the two is thicker stalks and paler leaves of celery.

Celery is a perfect replacement for lovage, not only for the taste but also for the appearance.

Celery has a slightly mild flavor and is not as pungent as lovage. For this reason, use a little more celery in place of lovage. Use about half more than the amount of lovage required in the recipe.

Lovage leaves are most commonly used in cooking than their seeds. The seeds and leaves have a similar flavor. When you don’t have the leaves, you can easily use the seeds for substitution.

In fact, lovage seeds work as a substitute for both celery and lovage leaves. Surprisingly, some of the popular flavorings like celery seed spice and celery salt are often made with lovage seeds.

Using seeds in place of leaves is a better option for some recipes. Because it helps to avoid the bulk and texture differences that happen with leaves and stalks. Seeds are best in recipes that require celery or lovage flavor minus the bulky and greenish texture of the leaves.

Celery and lovage stalks look very similar to fennel stalks and have a crisp, herbal taste that’s somewhat aligned with them, too.

Fennel is a good substitute for lovage not only for taste but also for the same appearance. Use it just like the lovage you use in your dishes.

The flavor of the fennel also very well fits into most recipes that include lovage.

After celery, fennel is the next best option for replacing lovage.

Lovage and celery belong to the parsley family of herbs. There is a close similarity among them with regards to their appearance, taste, and uses.

While lovage leaves are slightly more pungent, parsley leaves on the other hand are delicate and have a mild flavor.

In a pinch, you can comfortably use parsley as a lovage substitute in most recipes that require lovage or celery.

How can you use cilantro in cooking?

What is a good substitute for green onions?

What to use instead of sweet basil?

5 great substitutes for chives that shouldn’t miss out.

What are the constituents present in lovage?