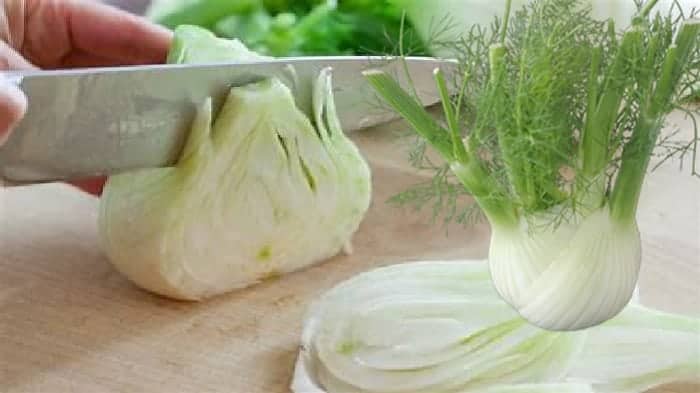 Fennel, botanically known as Foeniculum vulgare, is a flavorful culinary herb and medicinal plant. The entire fennel plant is edible but the seeds and bulbs are the most favorite.

Fennel is a flowering plant species in the carrot family. It’s a green and white hardy short-lived perennial herb with yellow flowers and feathery leaves. Fennel is widely cultivated for its seeds which have several culinary and medicinal uses. Fennel bulbs, fronds, and stalks are often used in a variety of dishes.

This article explores the uses, benefits, flavor profile, and substitutes for fennel bulbs.

What is Fennel Bulb?

Fennel bulb, also known as sweet anise, is a common vegetable in Mediterranean cooking, especially in France and Italy.

The fennel bulb is the whitish swollen bottom end of the fennel plant. In other words, it’s the base of the plant that gives rise to greenish feathery fronds with yellow flowers.

The bulbous base of the fennel looks like a potbellied cousin to celery. The fleshy white bulb has either round (male) or slightly flattened shape (female). A matured bulb is about 2 inches (5 cm) long and 3 inches (7 cm) in circumference, about the size of a tennis ball. However, overgrown larger bulbs tend to get stringy and tough with age.

Fresh fennel bulbs have a celery-like crunchy texture when eaten raw but they turn silky when roasted or braised.

Usually, fennel in a recipe mostly refers to the bulb. It is used as a vegetable whereas fronds are used as a flavoring herb.

Fennel bulb tastes like aniseed that is sweet, mildly spicy, and very aromatic. Raw bulbs have a robust flavor that puts off most detractors. Raw fennel bulb is an awesome treat for those who love to enjoy a spicy-sweet dish. Nonetheless, the assertive flavor of raw bulbs becomes sweeter and mild when they are cooked. Its texture also becomes soft and delicate after cooking. Flavor-wise, the best substitutes for fennel bulbs are anise seeds, licorice roots, or caraway seeds.

How To Cook Fennel Bulb?

Fennel is a versatile herb whose bulbs, fronds, pollen, and seeds can be paired with numerous dishes, both vegetables, and meat. Fennel bulbs are used as a vegetable and they pair well with beans, radish, spinach, onion, and more. They are a flavorful addition to soups, stews, and salads.

The bulbs are eaten either raw or cooked. They are chopped into thin slices before adding them to salads or any cooked dishes. Fennel bulbs add a sweet anise-like flavor and crunchy texture to salads and vegetable dishes. To soften the flavor of the bulb, try sautéing, braising, roasting, or grilling it.

How To Cut A Fennel Bulb?

Are you wondering how to prepare a fennel bulb? Definitely, it’s a simple task.

Fennel bulbs look a little gnarly with several stalks and fronds. Besides, the bulb also has tough outer skin. It looks challenging to cut a fennel bulb, but it’s easier and simpler than you fear.

First of all, cut off the green fronds and thoroughly clean the bulbs in cool water. The ways to cut fennel bulb depends on how you wish to use it the dish. For salads or slaw, thinly slice the bulb into rings with a sharp kitchen knife or on a mandolin and discard any tough outer skin from the rings. For other dishes, make the bulb stand on the root end and cut vertically with a sharp knife and slice them into small pieces.

What Is A Good Substitute For Fennel Bulb?

It’s hard to replace unique ingredients like fennel in your cooking. However, a fresh fennel bulb is a seasonal treat that can be harvested for several weeks. If they aren’t available for your immediate use, here are a few good substitutes worth considering:

Can you use celery in place of fennel and vice versa? Yes, both can be used interchangeably in your cooking. Celery root, also known as celeriac, is a lot similar in uses though they slightly differ in appearance and taste. Like fennel, celery root is a versatile vegetable used for soups, salads, and stews.

Celery root has a crisp, firm, parsnip-like texture under its tough peel and adds a sweet celery-like flavor to your dish. Perhaps, most people would prefer to enjoy the sweet taste of celery root than the anise-like taste of fennel bulbs.

In short, celery root is the best substitute for fennel bulbs for they both have similar uses in cooking.

Bok choy, pak choi, or pok choi is a type of Chinese cabbage that has green leaf blades with lighter bulbous bottoms. The tender white bok choy bulb is very similar to the fennel bulb in appearance and texture. This Chinese cabbage is a good replacement for fennel bulbs in dishes like soups, salads, stews, and stir-fries. The mild, cabbage-like flavor of bok choy is different from the taste of fennel yet a pleasant taste that would very well compensate for the absence of fennel bulbs in your dish.

Can you substitute onion for fennel? Yes, it resembles a fennel bulb in texture and appearance. Onion is an effective swap for fennel bulbs especially in salads, sauces, sandwiches, and cooked dishes. Onions when sautéed they give your dishes a sweet flavor and delicate texture reminiscent of fennel bulb.

Can I use leeks instead of fennel? Yes, the sweet flavor of leeks is a satisfying alternative to fennel bulbs in your dishes. In place of fennel, leeks work exceptionally well in casseroles and soups.

The hard bulbous part of leeks is not a great match to the soft crispy texture of fennel bulbs, yet they are a manageable fennel bulb substitute in a pinch.

Fennel and parsley belong to the Apiaceae or Umbelliferae family of plants and both of them have several common features. Chopped bright green leaves of parsley are a workable substitute for fennel bulbs. You can use them in salads and cooked dishes. To your advantage, parsley is easily available in most places throughout the year.

The fennel bulb is the bulbous base of the fennel plant that can be eaten raw or cooked. When raw, the bulb is crunchy and sweet; once cooked, it becomes silky soft. Before eating them raw or cooked, slice the bulbs into bite-sized pieces. In a pinch, the best substitute for fennel bulbs is celery roots, bok choy, onion, leeks, or parsley in the order of preference.

What is similar to anise seed?

What to use as a substitute for anise seed?

See these herb mixes that work in place of Fines herbes.

Choose one of these substitutes for chives.