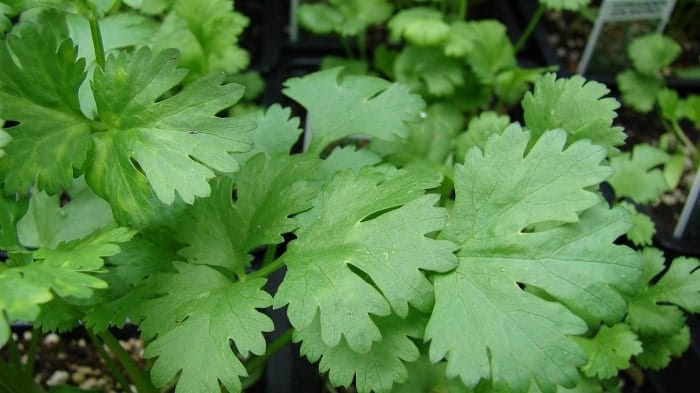 The use of cilantro or coriander leaves in cooking is not always conspicuous. This flavorful flat-leafed green herb can be consumed from leaves to the root.

Now, how do you use cilantro in your cooking?

Depending on how it is used, the flavors of this herb can be fully exploited or totally lost. Thus it’s necessary to learn to use cilantro correctly.

Generally, cilantro is not cooked. Just like parsley, it is added raw to cooked dishes. If introduced in the early part of cooking, it loses its flavor.

Cilantro flavored dishes are popular with gourmets, especially in Mexican, Thai, and Indian savory dishes. For example, you can use it in flavorful chutney served along with roast chicken or use it to add some zip to your morning eggs. Coriander leaves are a perfect ingredient for making cocktail drinks.

For the citrus-like flavor, cilantro is a regular finish herb in Mexican salsas and guacamoles. Similarly, a warming broth blanches fresh cilantro leaves, giving flavor and texture to Vietnamese pho bowls. This herb brightens the flavor profile and tempers the heat of spicy peppers in Chinese vegetable dry-fries and fried meats.

Tips On Cooking With Cilantro

Mostly, cilantro leaves without the stems are added to a dish just before serving. Also, the stems of this herb have a stronger flavor and are used in dishes like Thai soups and curry pastes.

How to use cilantro in your dishes? Here are the tips on using cilantro:

1. Wash and clean the leaves properly

The lacy flat green leaves of cilantro can be very dirty with particles of dust and mud. Before use, keep them dipped in water for few minutes and swish them around for few seconds before taking them out. Pat dry the wet cilantro by placing the sprigs in a salad spinner or with an absorbent paper towel.

Most cooks aren’t sure of cutting the cilantro and often use them as a whole. To mince cilantro, use a sharp chopper knife otherwise you’ll end up bruising them. Bruised herbs lose their texture and also wilt away faster while cooking. Both cilantro and knife should dry or else the minced leaves will stick to the knife and cutting board. Thinly minced leaves may turn into slurry-like consistency, thus do not chop the leaves into tiny bits.

3. How much cilantro to use?

Sprinkling one or two teaspoons of minced cilantro over your dish are not going to add much flavor. Add at least a quarter cup (4 tablespoons) of cilantro to a dish of four servings.

Do not add cilantro to your dish while cooking but sprinkle over the hot dish a few minutes before serving. Raw herbs provide maximum taste and bright green texture.

Unfortunately, some dislike the fresh cilantro in the dish for they sense a soapy flavor in this herb; they try one of the suitable substitutes for cilantro. If you enjoy this herb, then add a handful of chopped fresh cilantro to your dish for the best flavor. In other words, use cilantro like a salad green rather than as a garnish.

Both leaves and stems of cilantro can be eaten either raw or cooked. Nevertheless, cilantro is a delicate plant with a feeble texture. Cooking cilantro leads to the loss of flavor and texture. Therefore, cilantro is usually never cooked but eaten raw. Fresh leaves are mostly used as a garnish. If you ever want it to be cooked, then add them to your dish at the last minute of cooking.

5. Do you have to take cilantro leaves off the stem?

You can either skip the stem or eat it. In fact, cilantro stems have stronger flavors than leaves. Generally, only the leaves are used and stems are discarded. When only the leaves are used they make foods attractive, especially for garnishing. But in Indian curry-type dishes and savories, both leaves and stems are usable. For ease of eating, always chop the stems into small pieces before adding them to your dish.

Dried cilantro is quite different from fresh and it imparts a subtle flavor that is hardly enough to identify it. To put it plainly, it is as good as omitting the herb entirely than using the dried cilantro. In addition, the already subdued flavor of dried cilantro will totally disappear if they are cooked.

What is cilantro used for in cooking?

The leaves and dried seeds of cilantro are mostly used in cooking although the entire plant is edible. The stems of the plant are equally or more flavorful than leaves and are frequently used in dishes like soups, Indian curries, and Thai curry paste.

How to prepare cilantro?

Usually, farm-fresh cilantro is best for use. Tender leaves and stems of cilantro should be thoroughly washed and chop them up into small pieces. Preferably, use the minced or whole cilantro leaves to dishes after cooking or at the last minute of cooking.

How to cut up cilantro?

After thoroughly washing and pat drying cilantro, hold the root ends of the cilantro in one hand, with chef’s knife in other hand scrape off the leaves in a downward motion. With your finger, remove the thicker portion of the stems from the cilantro leaves; let the slender stems stay with leaves. Place the leaves on a cutting board and from one end rock the blade of the knife in back and forth to chop cilantro. Run the knife through the pile of sliced leaves several times until the pieces are in the desired size.

What To Use In Place Of Bay Leaf?

Use Of Fennel Bulb And It’s Substitutes

Is cilantro a coriander or parsley?

Uses And Benefits Of Culantro Explained