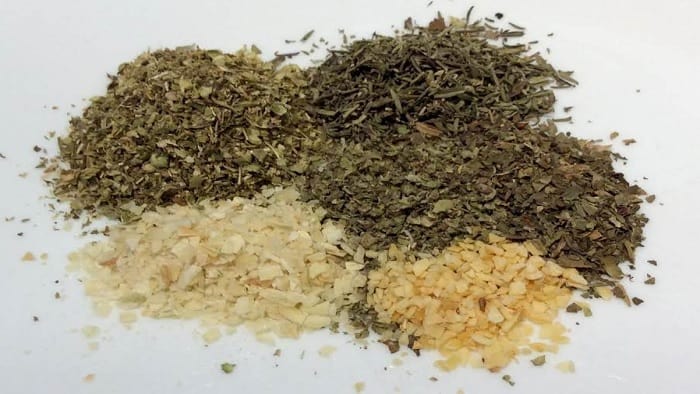 Greek seasoning is perfect for sprinkling on fish, chicken, and veggies. It’s amazingly tasty to have chicken smothered with this spice blend.

Like any other kitchen staples, you may have run out of this seasoning or are unavailable in your locality. In such a scenario, what can you substitute for Greek seasoning?

This article examines the best Greek seasoning alternatives that you can use in a pinch, also a little about its ingredients, flavor, and uses in cooking.

What is Greek seasoning?

Greek seasoning is a blend of different spices and herbs popularly used in some Mediterranean recipes. All the ingredients in Greek seasoning are common kitchen staples known for aroma and distinctive herbaceous and spicy flavors.

Most of the grocery stores in Southeast Europe do have this pre-made spice blend on sale, else you can buy it from online vendors like McCormick or Cavender.

Many of the store-bought Greek seasonings contain both gluten and MSG ingredients. But you can easily use your own homemade Greek dry seasoning with ingredients that are gluten-free as well as vegan.

What are Greek seasoning ingredients?

Are you wondering what Greek seasoning is made of?  This seasoning is comprised of a bunch of herbs and spices. Typical ingredients in a traditional Greek seasoning are oregano, onion, garlic, parsley, dill, thyme, and marjoram. The constituent parts can vary depending on the blend and manufacturer. Some of the customized Greek spice mixtures may contain additional ingredients like cinnamon, nutmeg, basil, pepper, or salt.

Generally, Greek seasoning is savory in taste with warm, minty, and earthy notes. It has a mild mixture of sweet and peppery undertones. The herbaceous aroma is outstanding in dishes that integrate this Greek spice mixture.

How is Greek seasoning used in cooking?

It’s a highly versatile all-purpose seasoning with a delicious aroma and complex flavor with a couple of undertone flavors. This seasoning is either sprinkled over or used as a spice rub in a wide variety of dishes.

It is typically used in dishes like chicken, lamb, beef, turkey, vegetables, and salads. A balanced blend of Greek seasoning with olive oil, lemon juice, or vinegar works great for dressing. Similarly, it is combined with yogurt and lemon makes a tasty dip for fresh vegetables.

What is a good Greek seasoning substitute?

The authentic taste of several Greek cuisines heavily depends on this mixture of spices and herbs. Usually, a pre-made Greek seasoning blend is conveniently used by most chefs. What if you don’t have it? Choose an emergency substitute that can save your dish. Think of using one of the following Greek seasoning substitutes most suitable in your recipe.

There is no better replacement for Greek seasoning (pre-made) than a homemade replica of the same. If you notice, all ingredients in this seasoning are staple cooking ingredients that you might already have in your pantry. To your advantage, you can make the best Greek seasoning spice mixture according to your taste preferences or the requirements of the specific recipe.

Thoroughly mix the ingredients in a bowl; store the ready-to-use blend in an airtight glass container. Alternately, blend spices in a spice grinder for a finer texture.

Use the homemade Greek seasoning in the same way as you use the store-bought pre-packaged blend.

Za’atar is the most commonly used spice blend from the Middle East with several variants throughout the region. Most of the ingredients used in za’atar are also used in Greek spice mixtures like oregano, thyme, and marjoram. However, za’atar has additional ingredients like sumac and sesame seeds. Despite some differences in their taste profile, still, both can very well be used interchangeably in most recipes that call for either of them. As a substitute, use za’atar in the same quantity as Greek seasoning required for your recipe.

Swap out Greek seasoning with Italian seasoning in the same quantity.

If you are missing Creole seasoning, try these substitutes.

What to use as a substitute for Cajun seasoning?

What is a good replacement for pickling spice?

What can I use instead of chat masala?

Here are the best alternatives to poultry seasoning.