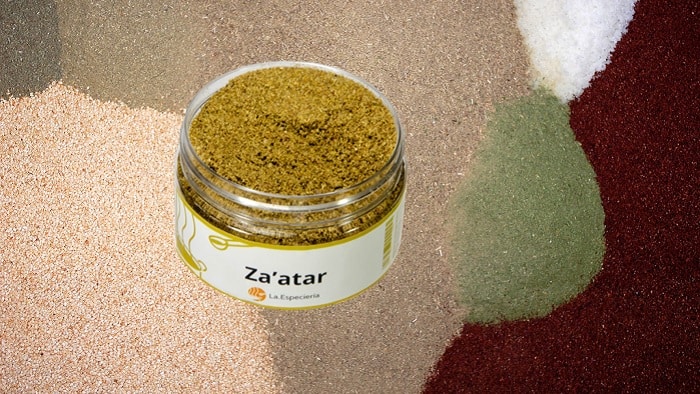 You may want to sprinkle Za’atar over hummus or baba ganoush! Or mix with olive oil for a flavorful marinade. But you don’t have it? Nothing to worry about! I’ve found the solution. This article brings home to you the best za’atar substitute to use in a pinch; also little about its flavor profiles and uses in cooking.

TABLE OF CONTENTS
What Is Za’atar?
What Is A Good Substitute For Za’atar Spice Mix?
The Bottom Line

You’ll find different varieties of this spice blend depending on where you are in the Middle East and the requirements of specific recipes.

Generally, za’atar is a combination of dried oregano (thyme/marjoram), toasted sesame seeds, and sumac.  These are commonly used ingredients in cooking and thus finding a substitute for this spice blend is not going to be difficult.

The taste of a traditional za’atar is herbal, tangy, nutty, or toasty, a mixture of complex flavors.

The taste can vary according to the ingredients; some are lemony but few others can be salty. Dried thyme, marjoram, oregano has a woodsy and floral taste, sumac provides a tangy and acidic flavor, and the toasted sesame seeds render a nutty flavor.

What is Za Atar used for in cooking?

Za’atar is popularly used in Middle Eastern cuisine; it’s a table spice as well as a cooking spice. This spice mixture makes a great dry rub for meats and roasted or grilled vegetables. Commonly, za’atar is mixed with olive oil and used as a marinade or as a spread for pita or flatbread. Simply sprinkle it over hummus, Labneh, or baba ganoush for an awesome taste.  This spice blend can be used in a multitude of ways; the list will be too long to enumerate them all here.

What Is A Good Substitute For Za’atar Spice Mix?

Besides the Middle Eastern dishes, Za’atar seasoning is versatile enough to be used in any cuisine. If you can’t get Za’atar in your area, using a good substitute for za’atar is a practical solution to implement. You may consider one of the alternatives listed below:

Traditionally, the three core ingredients in za’atar are oregano, sumac, and sesame seeds. Other ingredients in this seasoning vary in each region of the Middle East according to its use and maker’s preference.

Ingredients in a standard za’atar include:

Mix all the ingredients in a small bowl. Store it in an airtight container.

For making za’atar you must have the three core ingredients; also use other available ingredients according to your taste preferences.

Of the main three ingredients, sumac is scarcely available in some regions. If you don’t have sumac, use lemon pepper seasoning or lemon zest in its place.

Dukkah is an Egyptian spice blend that is a lot similar to za’atar. The sesame seeds and hazelnuts in this blend offer nuttiness and crunchiness like za’atar. The chief herbal ingredients in dukkah are dried mint and thyme; both are often included in za’atar blends. Like certain regional blends of za’atar, dukkah includes spices like coriander and cumin.

Obviously, dukkah contains few extra herbal ingredients not part of an authentic za’atar. Therefore, when you use dukkah as a replacement for za’atar, adjust the spice ingredients in your recipe.

Use dukkah in the same quantity as za’atar you use in your recipe. Usually, you’ll find dukkah in the Middle Eastern market, if not, make it your own with available ingredients.

Harissa powder is the ground spice blend of the spicy, earthy North African paste with a base of smoked chili peppers. Different blends of Harissa have few variations in herbal ingredients included in them like mint, cumin, coriander, thyme, or oregano.

In recent years, the harissa spice blend has gained a lot of popularity in the Middle East for its similarity to za’atar. Now you are in a greater chance to find them in African 0r Middle Eastern grocery stores.

Harissa is a manageable alternative to za’atar, especially in spicy dishes but be mindful of hot chili peppers in it. Start by adding harissa in small quantity to your dish till you get a flavor profile akin to za’atar.

Shichi-mi tōgarashi is a well-known Japanese spice mixture containing seven ingredients. This spice mixture contains sesame seeds and oregano that makes it somewhat similar to za’atar. Also, the other ingredients in Shichimi can go well with few dishes that call for za’atar. However, the chili pepper makes this mixture rather spicy. As a substitute for za’atar, use Shichimi in less quantity.

In place of za’atar, try out any combinations of herbs that can recreate a similar herbaceous flavor. Here are a few possible substitution options to consider:

Sesame seeds, Lemon Zest, and Herbs: Make a blend of 1 tablespoon of each sesame seed and oregano (or thyme/marjoram/coriander) and ½ teaspoon each lemon zest and salt.

Za’atar with its tangy and nutty flavor with a herbaceous note is the essence of several delicious dishes of the Middle East. If you don’t have this seasoning, you can easily make the blend at home. Otherwise, the nearest substitutes for za’atar are spice blends like dukkah, harissa, or Italian seasoning.

Is herbes de Provence a good substitute for poultry seasoning?

What can I use in place of Creole seasoning?

What is a good alternative to Cajun seasoning?