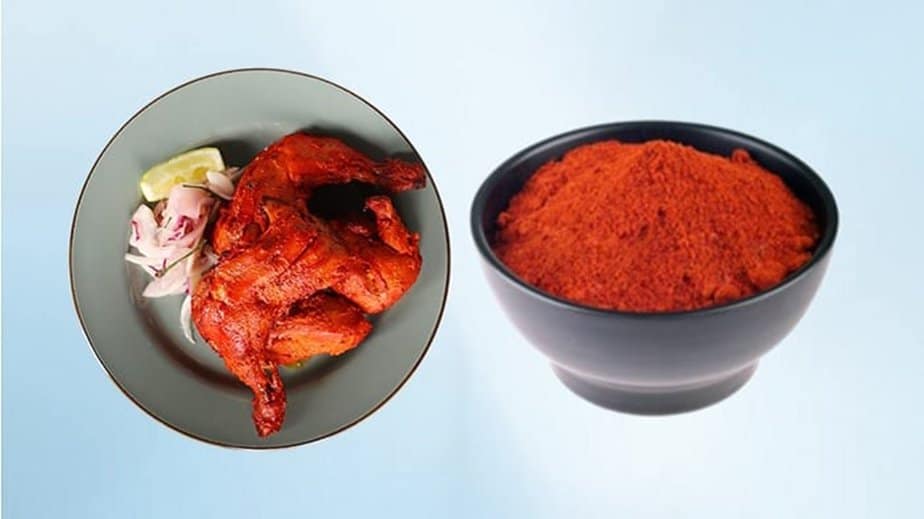 One of the hottest-selling foods in Indian restaurants across the world is tandoori chicken. It’s nothing but chicken marinated with spices and yogurt and roasted in a tandoor (a cylindrical clay oven).

The delicious taste of tandoori chicken is attributed to the tandoori spice blend. The charcoal burning of the meat elevates its taste all the more.

What should I do if I don’t have the spice mixture for tandoori chicken? What can I use instead of tandoori masala?

This article lists the best tandoori masala substitute to use in a pinch. Also, you’ll read a little about its ingredients, flavor profile, and uses in cooking.

What is tandoori masala?

A wide variety of tandoori masala is available from different brands.  They vary in ingredients and flavor profiles.

If you have the necessary ingredients, then you can easily make it at home. A freshly prepared masala can be stored in an airtight container for up to two months.

What is tandoori masala mix made of?

Tandoori masala is made of pantry staple ingredients, and there is nothing exotic about it. It contains a wide variety of spices, yet is easy to make at home.

Different brands may have a few variations in the ingredients used in the masala.

For the best flavor and aroma, buy whole spices and grind them yourself in a spice grinder.

Generally, tandoori masala makes the dish pungent and renders a complex flavor because of the variety of sweet, hot, and aromatic spices used in it. Also, a strong garlicky flavor is distinctively felt in all tandoori dishes.

When tandoori masala is used in non-tandoori dishes, it provides a savory, aromatic, and strong spicy flavor. Grilled chicken is succulently juicy because of the yogurt and lemon added to the tandoori spice mix. The smoky heat of the oven burns the meat and masala to render a tapestry of earthy flavors, from garam masala to ginger, garlic, and smoky chili flavor.

How is tandoori masala used in cooking?

Tandoori masala is mostly used for making tandoori chicken. wherein chicken is marinated with a mixture of tandoori masala and yogurt before roasting in a tandoor with heat and smoke.

In addition to tandoori chicken, this masala is used in Punjabi dishes like butter chicken or chicken tikka. Tandoori masala is also used in dishes other than chicken, like shrimp, paneer tikka, and more.

As you already know, this masala is exclusively used in North Indian tandoori dishes. However, the tandoori spice mix is versatile enough to be used in other Indian-style dishes as well, especially savory dishes.

If you have run out of tandoori masala or it is not available in your area, there are alternative spice blends that produce a similar flavor. Choose one of the following tandoori masala substitutes listed below:

It isn’t tough to make tandoori masala at home. To make things easy for you, all the ingredients in tandoori masala are pantry staples, and you might already have most of them in your pantry.

Grind all the ingredients into a fine powder and combine them in a blender or bowl. Store this spice blend in an airtight container.

For the best flavor, use fresh and whole ingredients and grind them by yourself just before making the blend. Making your own spice mix gives you the freedom to adjust ingredients according to your taste preferences.

Madras is the old name for Chennai, one of the largest cities in India. Though the name indicates an Indian spice blend, in reality, this spice blend has its origins in the UK. It is one of the most popular curry spice blends available in grocery stores in the UK.

This spice blend contains Indian spices; most ingredients are the same as those in tandoori masala. They both have the same level of heat and a somewhat similar taste profile.

As a substitution, use Madras curry powder in the same quantity as the tandoori masala required for your recipe.

Is garam masala the same as tandoori masala? They are not the same, but both of them have similar ingredients except for a few. Garam masala is typically used for seasoning cooked food.

Garam masala is milder than tandoori spice mix in terms of heat. In a pinch, you may use garam masala in place of tandoori masala, along with cayenne pepper, chili pepper, ginger, and other spices.

Also, one of the substitutes for garam masala could be considered in your recipe.

The vindaloo spice blend is commonly used in Indian dishes, especially in cuisines across the Goa region. This is said to be a fusion of Indian spices with herbal ingredients used in Portuguese cuisines. The vindaloo spice mixture is a common kitchen staple seasoning ingredient in Goa.