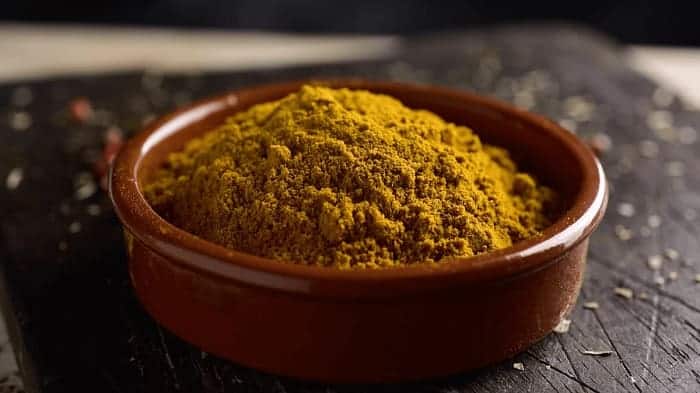 The origin of Madras curry powder goes back to the 18th century when India was ruled by Britishers. The spice blend used in Indian curries, especially in the Madras region of India, was the inspiration behind Madras curry powder. This spice mixture is nearly similar to the standard curry powder.

Initially, it was the spice blend produced by Indian spice merchants for the British army and government officials. Later on, it was labeled as Madras curry powder and was commercially sold in Britain. Interestingly, it’s still one of the popular spice blends sold by most groceries in the UK.

What is madras curry powder?

Madras curry powder is a pulverized blend of up to 20 spices. This fine-textured powder has warm, complex flavors and has a golden yellow hue with reddish-orange undertones.

This curry powder is an old venerable spice of the past. It’s an all-purpose spice mixture originally invented for Britishers in the colonization era; an imitation of a range of spices used in Indian curries.

The name “Madras curry powder” is a misnomer as there is no such spice blend actually exists in the Madras (Chennai) region of India.

The word, “Curry” is said to be derived from the Tamil word “Kari” which is a common name for any spicy saucy dish. The taste and content of curry vary greatly depending on its region of origin.

In India, there are several varieties of curry powders to the extent of specific masala (spice mixture) for each dish – for example, sambar masala, vegetable masala, chicken masala, rajma masala, and the list goes on.

Today, this yellow powder is familiar to most spice lovers yet seems out of place in the world of modern spices. Currently, the standard curry powder is largely popular than the Madras curry powder in Western cooking.

How to store it? Ground spices tend to quickly lose their flavor and potency; it should be stored in an airtight container and kept in a dry cool place. Usually, ground spices typically don’t last past six months.

Where to buy it? Pre-mixed Madras curry powder is available for buying in the spices aisle of most supermarkets, especially in the US and UK. You can also easily buy this curry powder from online vendors. Note, a homemade spice mix with whole spices ground just before use has the optimum flavors and aroma.

What is in it?

The most commonly used ingredients in Madras curry powder are turmeric, cinnamon, cardamom, coriander, cumin, chiles, cloves, fennel seed, mace, nutmeg, fenugreek, red and black pepper, poppy and sesame seeds, saffron, and tamarind. The dominance of turmeric in it gives the trademark yellow color to this spice mixture. Basically, it is a mixture of several spices that typically has rich, earthy, and pungent flavors with a few tangy overtones.

The traditional blend of Madras curry powder has warm, complex flavors with mild tanginess. However, the taste varies according to the different ingredients used in it. Various additions of spice add up to a distinctively delicate and highly sophisticated taste. At present, you’ll find several variations of Madras-style curry powder with a complex blend of warm, aromatic spices. The taste of this spice blend is dominated by key ingredients in this mix such as turmeric, cumin, coriander, and fenugreek. Overall, it has an earthy, balanced taste with a mild kick from chilies.

Is it hot or mild? Madras Curry Powder is spicier in taste compared to standard curry powder. By the way, if you are opting for a homemade curry powder then the spices can be blended in mild, medium, or hot strengths.

What is the use of Madras curry powder?

Indeed, Madras curry powder is a versatile ingredient, and using a small amount of it in spicy or savory dishes can instantly uplift the flavor with a mild heat.

Originally, Madras curry powder was intended to be used in different Indian-style curries with saucy textures. Over time chefs have very well exploited several culinary uses of this spice blend.

You can use it in marinades, sauces, and to create intensively flavored oil. Add it to yogurt, stuffing, sweet potatoes, and cheese sauces. It can also be used as a fitting substitute for curry powder in all kinds of sauces, marinades, as well as potato salads, pasta, and burgers.

Madras curry powder is a British blend of Indian spices specially formulated to suit British taste buds. Usually, this spice blend is milder than most spice mixtures generally used in Indian-style curries. If you have run out of this spice mixture, you can still give the same flavor profile to your dishes with few other alternatives. Consider one of the Madras curry powder substitutes listed below:

Garam masala is the most popularly used seasoning blend in the Indian subcontinent. It’s hotter and spicier than Madras curry powder and they both have the same ingredients for most parts. The big difference between them is the absence of turmeric powder in garam masala. It’s possible to use garam masala in place of Madras curry powder with a pinch of turmeric powder added to the mixture.

RELATED: Substitute For Garam Masala – 5 Flavorful Options For You

Undoubtedly, the best substitute for Madras curry powder is making a homemade blend on your own. It gives you the freedom to customize the ingredients in the spice blend according to the desired flavor profile of your recipe. Most importantly, using a freshly made spice mixture by grinding the whole spices gives your dishes the finest flavor and aroma. I’m sure you already have most of the ingredients required for this curry powder in your spice cupboard. Just make a simple search and there you have in a jiffy the complete Madras curry powder recipe. Once you learn to make it on your own, you may never ever buy the pre-mixed spice blend.

What is Furikake and what’re its substitutes?

All about dukkah seasoning and its alternatives

What is chai masala and how to make it?

Can I use curry powder in place of chaat masala?