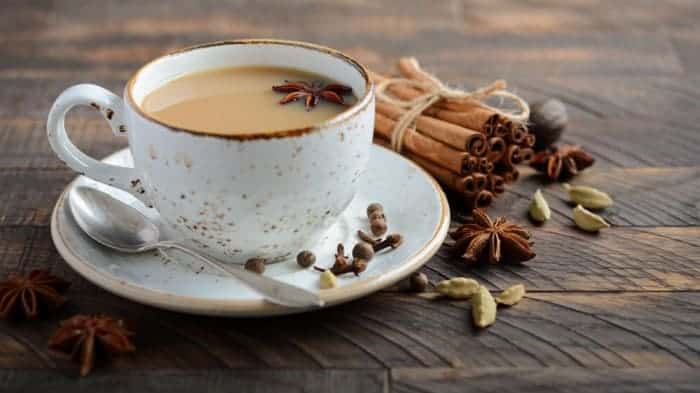 Masala chai (chai tea) is a traditional spiced tea from India, the land of spices. Chai masala is the spice mix used to make this tea. Hindi word “chai” simply translates to “tea” and “masala” means “a blend of spices” in English. Etymologically, the word “chai” is derived from the Chinese word “cha” which means tea.

What is Chai Masala?

Chai masala is a spice mix added to tea powder to make masala chai or spiced tea. Originating from India, this refreshing beverage has gained popularity across the globe. Masala chai is a regular beverage in most Indian homes, also available in most coffee and tea shops, and cafeteria,

Masala chai is made by boiling milk, black tea, and sugar with a blend of aromatic spices and herbs.

You’ll find several varieties of masala chai with a different blend of spices and herbs. Usually, every family has a blend that is loved by the family members.

The aroma and taste of chai are amazingly refreshing and relaxing. Drinking a cup of warm masala chai in the morning or at snacks time is a soothing experience that can instantly make you refreshed.

It’s worth learning how to make a masala chai if you don’t know. A great spiced tea needs a premium quality authentic black tea and masala.

According to one legend, chai was first used by a Buddhist monk on his way to China, observing the ritual of non-sleep, chewed a few wild leaves (tea leaves) that instantly made him feel rejuvenated.

Camellia sinensis (tea shrub) was cultivated in India and China from ancient times; and the technique of producing black tea was first developed during the late Ming Dynasty in Wuyishan, Fujian, in the 1590s.

It’s said that from ancient times masala chai was an exotic drink in the royal courts as a vivifying herbal beverage.

There isn’t a fixed chai masala recipe as the blend may vary in every home according to their taste preferences. In most cases, the core ingredients are black tea powder, milk, sugar, ginger, and cardamom. Other optional ingredients are star anise and cloves. You’ll also find other blends with additional ingredients like nutmeg, saffron, black pepper, or fennel, but they are less common ingredients.

Every ingredient used in chai masala like ginger, cardamom, and others is known for its several health benefits.

Masala chai is rich in antioxidants like theaflavins and thearubigins that can help your body ward off everyday toxins. All varieties of tea help lower cholesterol, lowering the risk of cardiovascular diseases.

How To Make Chai Masala?

There is nothing better than making your own chai for it gives you the freedom to customize the ingredients according to your taste. There are two types of chai masala, fresh chai masala (for immediate use) and dry chai masala powder (storable for future use).

Fresh chai masala for milk tea includes only a few ingredients like crushed fresh ginger roots and green pods of cardamom. If it is black tea, fresh mint leaves or a few drops of lemon juice may also be added.

Make a perfect mixture of all ingredients, preferably by shaking them in a tightly closed container. Store this spice blend in an air-tight container. According to your taste preferences, you may customize the proportion of the ingredients or add additional ingredients like star anise, fennel, or nutmeg.

Masala chai is unique and you’ll not find a matching substitute for it. Some of the possible substitutes for chia masala are:

Indian spiced coffee is a good alternative to masala chai for it includes similar ingredients used in masala chai like ginger powder, cardamom, cloves, cinnamon, and black pepper, the only difference is coffee powder is used in place of black tea powder.

Turmeric milk is a popular health drink in India and has several health benefits associated with it. It contains neither tea nor coffee but includes milk and spices such as turmeric, cinnamon, ginger, and black pepper. It’s a healthy herbal beverage that you can use as a replacement for masala chai for they both provide similar health benefits despite the difference in flavor.

Kadha, the oldest treasured secretes of India, is an herbal drink made with a concoction of various traditional herbs and spices. It is an immunity-booting herbal drink prepared with common ingredients like tulsi, ginger, turmeric, licorice, cinnamon, black pepper, and cloves. It does not use tea powder and milk like masala chai, still a good alternative to chai for health reasons.

What is a good substitute for advieh spice?

What can I use in place of Harissa spice?

Here are the best replacements for pickling spice blend.