CONTENT
What Are Fatalii Peppers?
Fatalii Pepper Scoville
What Does It Look And Taste Like?
Common Uses And Applications
FAQs

What Are Fatalii Peppers?

Fatalii chile peppers, part of Capsicum chinense species, are an African heirloom variety of chili that belongs to the Solanaceae or nightshade family. This chili, also spelled as Fatalli, is one of the hot peppers in the world, with a heat level ranging from 125,000 to 400,000 SHU on the Scoville Scale.

You’ll find a few variants of Fatalii chili that come in different hues of yellow, red, and white; with yellow being the most common variety.

In denial of rumors, it isn’t fatal to eat a fatalii. It’s extremely hot from the first bite, delivers a fast punch, and it can rattle you to the core.  Besides the stinging heat, it has a lovely citrusy flavor, perfect for hot salsa and sauces with a citrusy flavor. The extreme heat of fatalii chili limits its use in fresh applications but is commonly processed into hot sauces or dried and ground into hot chili powder.

On the nutritional front, it’s an excellent source of vitamin C, a powerful antioxidant to boost your immune system. It’s rich in capsaicin, a useful anti-inflammatory property that is capable of reducing perceived pain.

The fresh peppers will keep 1-2 weeks when unwashed, loosely stored whole in a plastic bag in the refrigerator.

The Fatalii chile pepper is native to central and southern Africa. It’s one of the natural variations of peppers introduced to Africa in the 15th  and 16th  centuries from Central and South America. According to some chili experts, this pepper could be an early relative of the naga or bhut jolokia peppers which are super hot peppers. Fatalii pepper is also closely related to habanero in shape, flavor, and aroma.

Key Fatalii Facts In A Gist

The fatalii chili comes in the top end of the heat ladder on the Scoville Scale with a heat level that ranges between 125,000 and 400,000 SHU, almost equal to Habanero.

Its heat is comparable to other hot peppers like Red Savina Habanero, Indian Tezpur, Habanero, Scotch Bonnet, Bird’s Eye, and Jamaican Yellow Mushroom. However, these are slow-burn hot peppers but the heat of fatalii chile is instantly felt and immediately rattles your tongue and mouth.

Fatalii peppers are small slender pods, averaging 1 to 3 centimeters (1 inch) in diameter and 6 to 8 centimeters (average 3 inches) in length. They are straight or curved and have a conical shape that tapers to a point at the tail-end. The skin of the pepper is folded with slight wrinkles and deeply creased and is waxy. They ripen from green to bright yellow on maturing; some non- heirloom varieties are red or white as well. The central cavity of the pods is filled with thin membranes and contains a few round and flat, cream-colored seeds.

Fatalii peppers have a citrusy flavor with strong notes of lemon and lime, also earthy and bright. Like habanero, this pepper to has a fruity sweet flavor. They have a unique fruity flavor compared to sweeter hot peppers like the scotch bonnet. At the first bite itself, the intense heat begins at the back of the throat and quickly spreads into the mouth before reaching its peak heat.

Like other hot peppers, fatalii peppers are not commonly used in regular dishes that usually call for mild or medium-hot chilies.

The citrusy tang of the fatalii goes well with any citrusy flavored hot sauces, salsa, or any other dishes with lemon or lime flavor. This pepper is suitable for both raw and cooked applications such as stir-frying, roasting, and boiling; pureed or minced raw pepper can be blended into marinades, dips, stews, and salsa.  Hot chilies work well as a marinade for grilled meat and fish. Often, fresh fatalii chili is used with any fresh fruits that pair well with oranges like mangoes and pineapples.

The thin-walled fatalii is a great choice for drying, and for making chili flakes and hot chili powder. In fact, fatalii powder is perfect for sprinkling on a citrus plate to add a strong spicy punch. Fatalli powder is often used in barbeque sauces, salsa, marinades, dressings, and chutney.

Hot sauce with fatalii pepper is a popular condiment that can add heat and citrusy, fruity flavor to any hot dish. 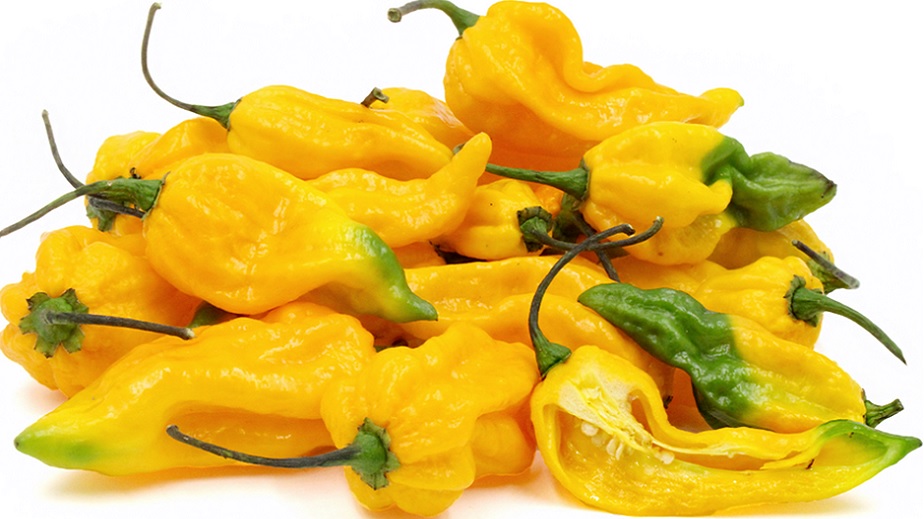 Where can you buy fatalii peppers?

This pepper is not common as its close kin like habanero and scotch bonnet. You might find fresh peppers in specialty stores and farmer’s markets. Buy fatalii powder, dried peppers, and hot sauces from online sellers. If you have the convenience and knack for farming, buy the heirloom fatalii seeds from online vendors and grow it.

How spicy is a Fatalii pepper?

The fatalii pepper is hot pepper similar to habanero or scotch bonnet. The spiciness of this pepper varies between 125,000–400,000 SHU on the Scoville Scale depending on various factors like region, soil, climate, mode of cultivation, and time of harvest. Mature and ripe fatalii chilies are spicier than raw, green chilies.

What can you do with Fatalii peppers?

They can be used in both raw and cooked applications. Fatalli is best suited for hot dishes that call for a lemon or lime-like strong citrus flavor with a fruity feel. Besides cooking, hot chilies are often utilized in preparing flavorful cocktail drinks and spicy jellies and jams.

How do you grow Fatalii peppers?

Start to germinate fatalii chili seeds indoors, approximately 7 weeks before the average last frost in your local area. Sow the seeds about a half-inch deep into regular potting soil. Usually, within 7 to 14 days the seeds begin to germinate. One to two weeks after the average frost, plant the pepper plants (seedlings) in their final outdoor location.

When to harvest fatalii chili?

After transplantation, the pods will be ready for harvest in about 80 to 100 days; when ripe, the peppers will be bright yellow. Fully grown green peppers and ripe yellow peppers have the best flavor and are at the peak of spiciness.

For further reading, have a look at the detailed reviews of African Bird’s Eye Chili and Datil Pepper in other articles here.