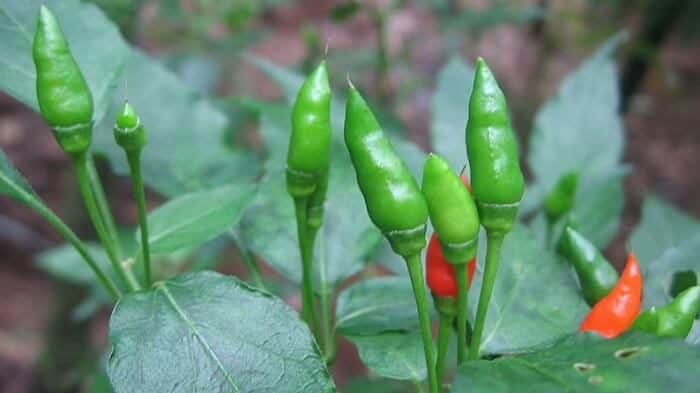 The African bird’s eye pepper is a variety of small hot pepper that grows naturally in the African wild, and it’s very similar to the original Bird’s Eye Chili from Thailand.  Often used in soups, hot sauces, and dishes in African cuisines, this chili is one of the hottest chilies in the world. The heat level of bird’s eye pepper (African/Piri Piri variety) can shoot up to 175,000 Scoville Heat Units.

The African birds’ eye is a small chile that is hardly an inch long but deeply hot and spicy. Also known in different names like Piri Piri, Pili Pili, or African Devil, this chile matures to red or purple and has a tapered shape with a blunt pointed tail end. In recent times, it is commercially grown in several parts of Africa. Besides its use in cooking, pepper extract is used in pest control.

The African bird’s eye chili is a close cousin of Tabasco chili and they both belong to the Capsicum frutescens species. This hot and flavorful chili is a specialty spice of Africa and is said to be the hottest among all the different varieties of “bird” peppers.

According to the growing conditions, including soil and climate, the bird-eye plant can range in height anywhere between twenty inches to four feet. On the whole, it’s a naturally growing bushy plant with leaves of varying length from one and a half to three inches and a half to one-inch width.

The length of the pepper can vary from one-half to one inch. Initially, the pepper pods are green and as it changes into bright red when matured.

Just like the Thai chili, African bird’s eye chili has a fruity, peppery flavor with intense heat. For most people, the green bird eye chilies are beloved than the mature red chilies for the green ones taste more fruity and herbaceous.

According to a Scoville test done by Harald Zosche, a German farmer, each variety of this pepper has a different level of pungency. For example, according to his trial tests, the Malawi Birdseye variety which came from the African wild clocked in at 112,226 Scoville Heat Units. However, the same variety of pepper grown in his garden in Germany was measured only 99,579 SHU. The most popular variety of Bird’s eye chili from Thailand typically ranges from 50,000 to 100,000 Scoville Heat Units.

African devil chili is the key ingredient in the Peri Peri Sauce, a popular African condiment made of chili, garlic, oil, and vinegar/lemon. In Africa, this chili is popularly used in soups, hot sauces, stews, and meat dishes. Also, it’s a close substitute for Tabasco pepper.

African Bird’s Eye is a flavorful addition to chili con carne, tacos, or nachos. Pureed chili is often used for spicing up marinades or as a spicy substitute for condiments like ketchup or mayonnaise.

Besides the culinary uses, this pepper has medicinal applications, especially for its pain-relieving properties for alleviating arthritis as well as toothache. Ground chilies are commonly used in pesticides and insects repellents.