At times, you may badly need a potato starch substitute especially when you don’t have it in your pantry.

Potato starch is a commonly used food thickening agent. For some folks, it is an essential ingredient in some of the popular recipes, especially in cake making.

For some reason, if you are unable to use potato starch, then you may want to find an alternative to it.  In this article, you will read about the best replacements for potato starch.

TABLE OF CONTENTS
What is potato starch?
Common Potato Starch Substitutes Worth Using
The Bottom Line

What is potato starch?

To get the starch, first, you have to crush the potato tubers into pulp. In this process, the starch grains are released from the destroyed cells. The starch is then washed out and dried into a powder.

The dried starch obtained from potatoes is a fine white powder with tiny oval-shaped granules.

Some of the prominent features of potato starch are:

Potato starch and its derivatives are used in many recipes and food processing. It is an excellent food thickening agent and also helps to conserve foods.

This gluten-free starch is popularly used in:

The starch extract from potatoes has several non-culinary or commercial uses as well. This starch has been recently introduced to the pharmaceutical and cosmetics industries for manufacturing pastes, plasters, and dressings, powders, and creams. It is also used in antibiotics as it helps dissolve them better in the body.

Some of the common non-culinary uses include:

Potato starch is washed out of crushed potatoes and then dried to a fine, white flour. It’s commonly used to thicken, stews, soups, sauces, puddings, custards.

If you are looking for a replacement for potato starch, then you have a good many options. Fortunately, some of these alternatives may be already available on your kitchen shelf.

The following are some of the best substitutes for potato starch.

Tapioca and potato are both identical tubers. For this reason, they share several similarities.

Undoubtedly, tapioca starch or flour is an excellent replacement for potato starch.

Also, tapioca starch is a gluten-free powder. It fits well in baking and works as a food thickening agent.

Tapioca starch has a slightly lower thickening consistency in comparison to potato starch. So, you need to use a little more quantity of tapioca starch while substituting.

Tapioca starch does not withstand over-heat cooking. Preferably, use it in the last minutes of adding ingredients to your cooking.

Summary: Tapioca starch is a gluten-free alternative to potato starch. It is a thickener that works well in puddings, soups, and gravies.

Arrowroot starch or flour is another tuber starch very similar to a potato.

Moreover, arrowroot flour is a gluten-free starch with several nutritional benefits. It is more versatile and beneficial than potato flour.

Arrowroot powder is a thickening agent used to add texture and structure in cooking and baking applications. Most importantly, it does not break down in acidic liquids, unlike tapioca flour.

Arrowroots flour has a thinner consistency than potato flour. In baking, replace 1 tablespoon of potato starch with 2 tablespoons of arrowroot starch.

Summary: Instead of potato flour, arrowroot powder can be used as a way to thicken gravies, soups, sauces, and stews. Arrowroot is great for metabolism, circulation, and heart health.

Cornstarch is easily available and easy to use in baking and cooking. Perhaps, it’s the most commonly used starch substitute.

Just like potato flour, it is also used as a thickening agent in food processing. It is most suitable for use in liquid-based foods like sauces, gravies, custard, and soup.

Cornstarch is suitable for mixing with lower-temperature liquid dishes to form a paste or slurry-like consistency.

Some chefs prefer to use cornstarch instead of potato starch because it forms a translucent, rather than an opaque mixture.

It has a neutral flavor and tastes like potato flour.

You can swap cornstarch and potato starch in a 1:1 ratio.

Summary: Cornstarch is the best replacement for potato starch. It is used as a thickening agent in liquid-based foods. Cornstarch gives a translucent texture to baked foods.

Rice flour is comparatively a weak thickener. But still a suitable gluten-free alternative to potato starch.

If a recipe calls for potato starch, then one of the last substitute options is rice flour. It works well for thickening stews and soups but is not so suitable for other recipes.

It has a neutral taste and flavor with a light texture.  In addition, rice flour is somewhat gritty, and heavier than tapioca and arrowroot starches.

Most chefs recommend the use of rice flour at the beginning of cooking and allowing it to get cooked slowly.

Because of its light texture, you need to use it in more quantity than potato flour while substituting. 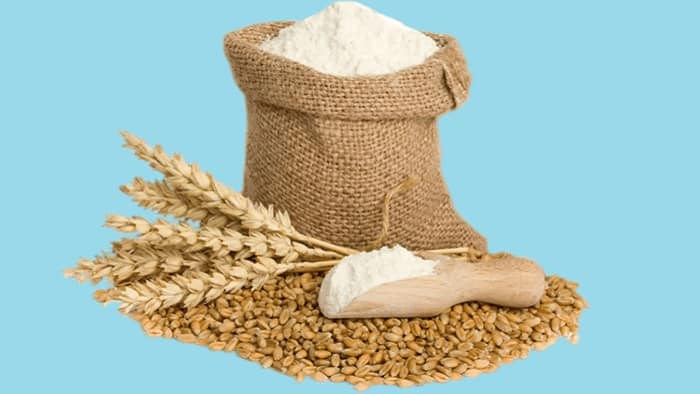 Wheat flour is a fine alternative to potato starch.

Unfortunately, it is not a good option for those looking for gluten-free starch.

Like potato flour, it is also a good thickener. It is an all-purpose flour when making a roux.  Wheat flour is a nice thickener for sauce and gravy for meat.

Apart from this, using whole wheat flour in cooking does not change the texture and color. In fact, it adds a subtle nutty flavor to your dish.

Differing from potato flour, adding wheat flour to your dishes can result in clumps if you cook it too quickly.

While substituting wheat flour with potato starch, you require a fewer quantity of wheat flour.

Summary: Wheat flour can be a substitute for potato flour when you have no other substitutes available at hand. It isn’t a gluten-free diet.

Gluten-free potato starch is a key ingredient in food processing. It is one of the best thickening ingredients in baking and cooking.

If you do not have potato starch in stock, then you can use any other good starch instead.

Our preference of top substitutes for potato starch in order are cornstarch, tapioca starch, and arrowroot flour.

Wheat and rice flours can also be used as replacements for potato starch.

What can I use instead of filé powder?

Can I use potato starch instead of arrowroot powder?

Can I replace cassava flour with tapioca flour?