Fear of celiac disease has made many people terribly ‘gluten paranoid’. Obviously, the oatmeal also has come under the needle of suspicion for the possible “sticky substance,” from L. gluten (gen. glutinis) “glue” in it.

‘Is oatmeal free of gluten’ is a commonly raised question in all health forums.

Oats are the most preferred breakfast around the world. However, many people are seriously worried about the pros and cons of this delicious meal on health, especially of the gluten factor.

Most cereal grains do contain gluten; as oats also belong to the cereal family of food, it is natural to suspect this as well. In this article, we shall explore the actual gluten facts on oats.

Does Oatmeal Have Gluten?- The Real Story

The answer to this question is both “YES” and “NO”.

A majority of the oatmeal packs sold by different brands today are NOT 100% pure. They are cross-contaminated with a small amount of wheat, rye, or barley.

According to several research reports, barley, wheat, and rye are classified as gluten-rich foods.  Persons with celiac disease are advised to shun them.

The oatmeal that contains a mixture of these grains is not gluten-free. The most popular brands of oatmeal available in the market today are not safe for celiac patients. Others who consume it regularly have a possible risk of developing celiac disease in the future.

Some popular brands like Quaker Oats do have a separate pack of gluten-free oats.

However, the gluten-free status assigned to oats is highly controversial as some health scientists do not agree with it.

According to a few of the recent study reports, oat is not totally free of gluten, but the amount of gluten contained in it is very negligible. The little amount of gluten present in oat does not cause inflammatory reactions in the majority of the people consuming it. Reason For Mistaking Oats As A Gluten Grain

Is there gluten in oatmeal? This is an often-heard question that frequently comes up for discussion because of the wrong classification of grains.

The Agricultural scientists of the past century had grouped oats along with wheat, barley, and rye because of their common similarity. Later on, this non-scientifically established group of four grains came to be called ‘gluten grains’ traditionally.

However, the recent research studies aided by modern technology have unjustified the classification of oat as ‘gluten grain’.

Some of the healthcare practitioners are still unconvinced about the recent study reports on oats. They continue to consider oat to be a gluten grain like the other three.

A few other healthcare practitioners clamor for considering a ‘gluten-free diet’ synonymous with a ‘wheat-free diet.’  In fact, barley and rye do contain only a lesser amount of gluten in comparison to wheat.

The gluten in oat is highly subjected to conditions. “Oats are inherently gluten-free, but are frequently contaminated with wheat during growing or processing.”

Do Oats Contain Gluten? – From The Scientific Perspective

Recent scientific studies can give the best answer to your question, ‘Do oats contain gluten beyond the permitted amount?’

In the last few decades, several studies have been done to evaluate the safety of oat consumption. Some of these studies are critical about the oat protein that can cause inflammation, especially in celiac patients. But these studies, in general, see oat as a gluten grain.

A comprehensive review of the medical literature that was published in 2011 compiling 75 studies published on the topic of “oats and gluten” since 1953.

Here are the key findings of the 75 studies in general: –

Whole grains are best for health as they are high in fiber, low in fat, and absolutely filling. Eating whole grains helps to prevent diabetes, heart diseases, and certain types of cancer.

According to healthy diet practices, 2/3 of the daily intake of grains in our daily diet should be whole grains.

Are Whole Grain Oats Gluten-Free? I’m sure that all oatmeal lovers are eager to get an answer to this common query.

All uncontaminated whole grain oat is gluten-free. Oats are most nutritious and healthy when they are taken as whole grains.

According to the University of Chicago Celiac Disease Center, oat is technically gluten-free as it is a different type of grain in comparison to barley, wheat, and rye which contain the protein gluten. However, oat contains protein avenins which is a less harmful variant of gluten.

The word “Groat” refers to cereal made from whole, hull-less oats; it is a Scottish word in use for hundreds of years.

The steel-cut oats are the ‘whole oat groat’ split into pieces. It has a nutty and chewy flavor. This type of oats is diabetes-friendly as they do spike the blood sugar level, unlike the highly processed oats.

Are Steel Cut Oats Gluten-Free? Technically speaking, they are gluten-free if they are made of pure oats. However, it may not be good for all celiac patients as they might produce negative reactions in some.

The rolled oats are traditional oat groats that have been de-husked, steamed, and then rolled into flakes under heavy rollers before being stabilized and lightly toasted.

If rolled oats are your favorite, the answer to the question ‘are rolled oats gluten-free?’ is worth knowing.

Oats’ gluten is different from wheat and barley, 80% of the protein present in oat is avenins which are similar to gluten.

However, oats are said to be safe for gluten sensitivity because it is easier to digest and less likely to cause negative reactions.

According to studies, only less than a percent of celiac person is affected by the oats diet.

It is possible to grow oats that do not have any gluten cross-contamination. Pure oat is safe for the majority of celiac patients, except for a few who might experience negative reactions.

You need not give up eating oats if you choose to eat only pure oats. However, the answer to the question ‘is oats gluten-free?’ highly dependent on how oats are grown and processed.

The oats usually become cross-contaminated with gluten when they are grown in the same field along with other gluten grains.

Are oats gluten-free when processed in a multi-grain processing factory? No. If the oats are processed in the same facility that also processes wheat, barley, or rye, the oats get cross-contaminated with gluten.

In short, from cultivation to the final level for processing and packaging, oats should not come in contact with any other gluten grains.

How To Choose Healthy Oats?

As we have already addressed the question ‘is oatmeal gluten-free?’, now let us see how to choose gluten-free oats.

If you have gluten sensitivity, you should buy only gluten-free oats. A vast majority of the oats sold in the market have cross-contaminated gluten in them. Here are a few tips on how to choose healthy oats:

Which Oat’s Brands Are Safe?

For those who can tolerate oats, there is a good variety of gluten-free certified oat brands in the market.

The top brands in the market that sell pure oats are:

Holly’s Oatmeal: – Known to sell the purest oatmeal in the market which contains less than 5 parts per million of gluten.

Udi’s Gluten-Free: – It’s certified gluten-free, and its products contain less than 10 parts per million of gluten.

Montana Gluten-Free: – Sells pure oats which are directly sourced from farmers who follow the proven methods to produce gluten-free oats.

You can also find several other companies that sell pure oats both certified and uncertified. You may choose any brand you prefer but make sure to check the details on the brand before you purchase it. 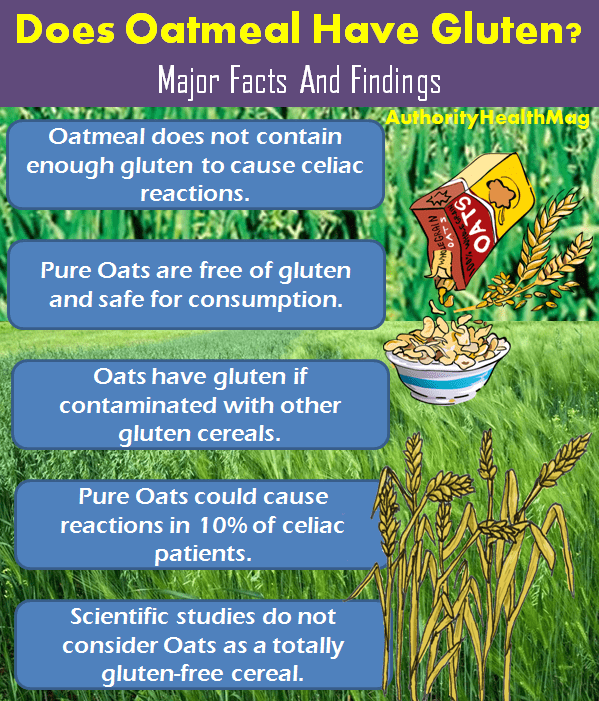 The question “is there too much gluten in oatmeal” is quite an instant reaction as oats also belong to the cereal family of foods.

Pure oats are healthy and safe for consumption including people with celiac disease. However, roughly about 10% of individuals with gluten resistance do experience a negative reaction from the pure oats too.

Technically speaking pure oat is a gluten-free cereal, but going by the scientific analysis, all types of oats contain a small amount of gluten. The negligible amount of gluten contained in oat will not cause a gluten reaction in most people.