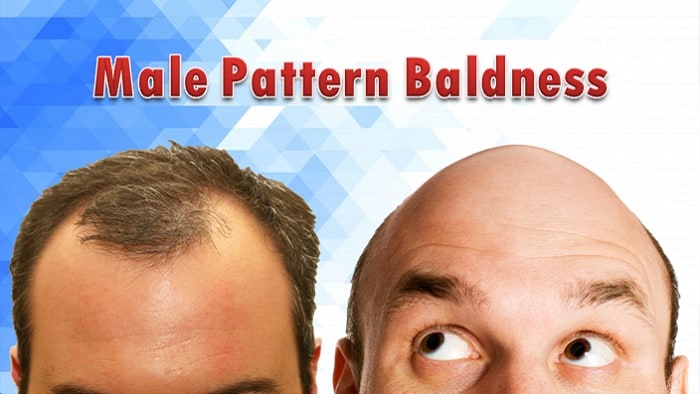 It is mentally disturbing and painful for most men to see the baldness that is gradually developing on their scalp.

The present-day food habits and lifestyles have anticipated the appearance of male pattern baldness in men at an early age than before and it is all the more rampant as well.

The incidents of baldness estimated by the researchers at Palacky University in the Czech Republic suggest that nearly 30 % of men by the age of 30 and 50% by 50 are affected by baldness.

Another study at Victoria in Australia showed that over 73.5% of men in the 80 plus age category have baldness.

In this article, we are going to have an analytical look at the causes and treatment for male pattern baldness. We shall also discuss some of the popular myths on baldness that do not have any scientific backing, yet some correlations are noticed.

What is Male Pattern Baldness?

It is characterized by the backward rescission of hair-line; usually ‘M’ shape hair loss formation at the beginning. MPB at the advanced stages, the hair strands become shorter, finer, and thinner to create a ‘U’ shaped pattern of hair present only on the sides of the scalp/head.

This type of pattern baldness will affect 70% of men in their lifetime.

Androgenic hair loss in men starts above the vertex and temples of the head, or at the calvaria of the scalp.

The pattern of hair loss in men usually stops with the total loss of hair in the upper portions of the head and a rim of hairs will remain at the rear and sides of the head.

It is estimated that 40% of women too will experience pattern baldness…..but in most women, it is characterized by thinning and shortening of hair on the mid-frontal area of the scalp that may not result in complete loss of hair unlike in men. 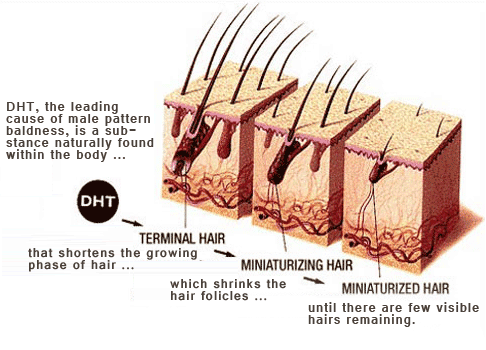 Male pattern baldness is closely related to male sex hormones and genes of the person.

As you already know the hair follicle is a tiny cavity on the skin from which a hair strand grows and remains fixed.

The shrinking of the hair follicles leads to the shortening and thinning of hair, and then they eventually fall off. New hair does not grow from the shrunk follicle as they remain in a dormant stage.

As a man grows older, the androgen hormone suppresses the hair growth on temples and scalp vertex, and it leads to baldness. But this same hormone does not suppress the growth of facial hairs. This paradoxical behavior of Androgen is because it has varied effects in different types of dermal papillae in follicles of the scalp and face. Several studies on these peculiar behaviors of androgen have been attributed to various reasons.

The balding is also because of genetic predisposition (diathesis). Since androgens and androgen receptors (AR) are the initiating cause of androgenic alopecia, their genetic corollaries are a subject of much research.

Without going into the scientific aspects of the genetic corollaries of baldness, it is commonly noticed with men whose fathers showed pattern hair loss are 2.5 times more likely to experience pattern baldness regardless of maternal genes.   The maternal genes are important because it predetermines the androgen receptor gene in the person providing the possible diathesis for androgenic alopecia.

An old Chinese adage says ‘there is no cure for baldness and jealousy.’

The adage does not hold worthy now as several baldness cure solutions have come up in the recent past.

Since a decade or two hair transplantations have become very popular; it is said to be a viable male pattern baldness treatment that is common now.

Let us look at some of the best ways for people to manage their baldness.

Most men prefer not to do any treatment for baldness as it is a sign of aging naturally. In fact, the best solution to manage baldness is the graceful acceptance of this physical condition and living with it happily.

Baldness condition is distressful and agonizing, especially for the men who turn bald at a very young age….turning bald after 50 is happily accepted by most men.

Since it does not cause any pain or discomfort, there is actually no need to take up any baldness cure procedures. In some cultures, baldness is even considered a sign of wisdom and maturity.

Currently, there are few popular medications available for a baldness cure. But none of them actually provide 100% re-growth of the hair. Let us have look at three of the popularly used medications:

This medicine is intended to block the conversion of testosterone to dihydrotestosterone that affects the hair follicles to shrink and be dormant. Finasteride is quite effective in delaying hair fall and also helping the re-growth of hairs from dormant follicles.

Finasteride is an oral medication, and usually, a 1mg dosage is to be consumed daily. It helps in reducing the DTH produced by the 5-alpha-reductase type 2 enzymes by 85% or more. It helps in protecting the hair follicles from DHT damage. Have a look at the FDA Safety guideline on Finasteride before you use it.

It is a drug similar to the Finasteride used for baldness treatment. This is an oral medicine that inhibits DHT production from 5ar-2 enzymes slightly better than Finasteride. However, this medicine is not approved by the FDA as a safe hair growth medicine as it can result in side effects that may even give rise to severe neurological issues.

It is an FDA-approved drug for male baldness treatment. Usually, it comes in lotion form that needs to be daily applied to the baldness-affected areas of the scalp to stimulate the hair follicles. Minoxidil (Rogaine) has worked for many men in slowing down hair fall and also a noticeable improvement in hair growth.

It is NOT a preventive medicine that can stop further DTH damage to the hair follicles.

There are also study reports that suggest when Minoxidil is used in combination with ketoconazole shampoo, and spironolactone, it produces a better result in slowing down the baldness progress and in promoting the growth of new hairs.

It must be noted that all these medications work best when they are used at the initial stages of androgenic alopecia. These treatments also need to be continued regularly and not a temporary treatment for a few weeks or months. 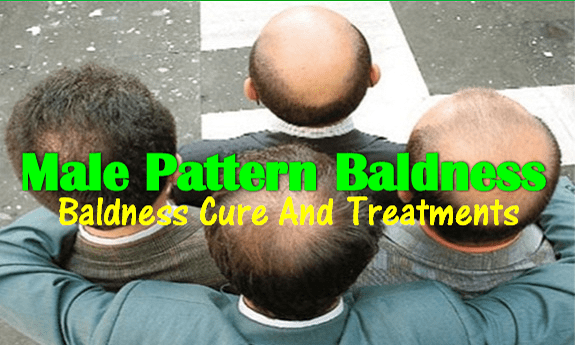 The use of wigs or hairpieces is one of the simplest ways to hide baldness. Of course, most men will not prefer to wear a wig or hairpiece as it is less convincing and easily identifiable as false hair. It can also result in scars, infections, and abscesses of the scalp in some people.

Some people love to do tattoos and skin-arts to hide the baldness and few others prefer to shave off the entire hair on the scalp and maintain a hairless scalp always.

Hair transplantation is done with the help of surgery on the scalp in which narrow strips of hair-bearing scalp are extracted from the back of the head and replant as tiny grafts (in 1000s) in the areas of the scalp with thin or no hair.

The success rate of the hair transplant is 60% with possibilities of new hair growth in six to nine months after the surgery.

Currently, the most advanced form of this treatment is done by transplanting follicular units (a group of 3 to 5 follicles); those units are surgically implanted in the scalp nearby and large numbers.  The implants of the tiny grafts are done by creating small incisions on the scalp without deep cut surgery.

Certain pharmaceutical companies have come out with laser therapies that can activate the hair follicles to re-grow the hairs. However, the success rate of this treatment is not known and further studies and developments on this method are still needed.

The Ayurvedic stream of herbal medicines (especially from India) has come out with several natural baldness solutions. Those treatments are mostly for slowing down the hair fall than the re-growth of hairs on bald areas of the scalp. There are also oil-based solutions like coconut oil therapy and castor oil treatments used for hair growth and the prevention of hair fall.

There are several myths are doing the rounds on baldness. Every society in different parts of the globe has one or more false beliefs connected with the male pattern of baldness.

Many of these myths on baldness are related to one’s virility, intelligence, social class, job, wealth, etc.

Here are some of the common myths that do not have scientific evidence to back them.

Many of these myths do not have any scientific linkage; however, some amount of correlation between them is noticed in some cases.

Male pattern baldness is a common issue that affects more than half of the men’s population by the age of 50.

A major cause of male pattern baldness is the miniaturization of hair follicles by androgenic hormones. Hereditary factors and individual genes play a very crucial role in the possible happening of baldness in an individual.

Medications do not help in preventing baldness but they can help in slowing the hair fall rate and stimulate the follicles for re-growth of hairs to a certain extent.

Most men do not prefer to have any treatment for baldness and gracefully accept it as an unavoidable physical condition.