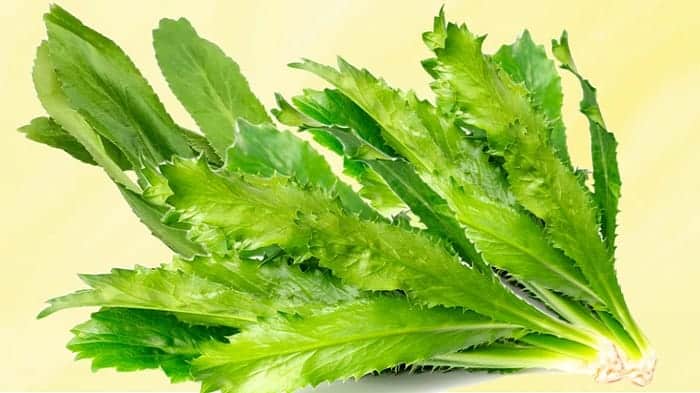 Culantro is widely used in a variety of dishes throughout Latin America, the Caribbean, and Southeast Asia. A spring of culantro leaves can add a depth of flavor to the stew. This Caribbean herb can jazz up your sauce with a pungent aroma and mild bitterness.

Culantro is often mistaken for cilantro or coriander though they are two different herbs.

This article examines, ‘what is culantro exactly’? Also, here you’ll discover the benefits, uses, flavor profile, and substitutes for culantro.

CONTENT
What Is Culantro?
What Is A Good Culantro Substitute?

Culantro (Eryngium foetidum) is a herb somewhat similar to cilantro in flavor and appearance. It’s a tropical biennial plant in the Apiaceae family, which includes carrots, parsley, celery, and parsnip.

This herb is indigenous to Caribbean regions. This leafy green herb was introduced to Latin America after European colonization.  Currently, culantro is widely cultivated in the tropical regions of Central and South America, the Caribbean, and Southeast Asia.

A culantro plant can grow up to 1 foot tall with leaves as much as two inches wide. It has thick roots and fleshy waxy leaves with blue flowers in cymose heads.

Culantro grows like lettuce, with leaves around a rosette and stalks. Culantro leaves on the basal rosette are narrow, with rounded tips, tapered base, and toothed margins.  The leaves grow 3-4 centimeters wide and 10-16 centimeters long. The leaves on the stalk are smaller and tougher.  Culantro leaves’ margin is serrated; each tooth of the margin has a small yellow spine.

Culantro In English And Other Languages

Besides its use in cooking, it’s a medicinal herb that forms the part of a few popular medicinal herbal blends or used alone. This herb is known to have analgesic and anti-inflammatory properties like cilantro have.

Traditionally, it’s a homegrown treatment for a variety of ailments. Culantro is often used to treat bad breath, diabetes, asthma, pain, neurological inflammation, and detoxification.  According to Purdue University, culantro leaves and roots can also be prepared in tea form to combat flu, constipation, and fever.

Just as you store cilantro leaves, wrap up the fresh culantro leaves in a paper towel and refrigerate in air-tight containers or plastic bags. Usually, the leaves stay fresh for about 10 days when correctly stored. Always rinse and pat dry the leaves before cooking.

A pungent aroma and mild bitterness are characteristic flavor features of culantro. It has a stronger soapy flavor than cilantro. Many don’t appreciate the odor of this herb for its smell is often compared to crushed stinkbugs or burnt rubber. Some say that it smells like crushed bedbugs that seem to be quite abominable for many. In fact, culantro is appreciated for its fibrous content and leafy texture than flavor.

Culantro leaves are a flavorful addition to a variety of recipes just the same way you use cilantro. It’s commonly used in Caribbean cooking to spruce up anything from rice, beans, or soups. In Vietnamese beef noodle soup (pho) both cilantro and culantro are used simultaneously. The strong pungent aroma of this herb is well utilized in several Vietnamese and Thai recipes, especially in soups, stews, and noodle preparations. It’s an important ingredient in the Caribbean vegetable mix called sofrito. An addition of culantro to pesto, Cuban chicken stews, noodle soup, or salsa works well to ramp up their taste and aroma.

Use the leaves in your dishes at the early part of cooking for its strong flavor can withstand long cooking.

Where to Buy Culantro?

Culantro is easily available in most groceries in Latin America and Caribbean but not in other regions. If you are lucky, it may be available in hypermarkets in that sell fruits and vegetables from all over the world.

Note, if you are living in a tropical region, culantro is an easy herb to grow in the backyard of your kitchen. Get the culantro seeds online and try your luck in growing them.

What Is A Good Culantro Substitute?

Culantro is not a popular herb outside its native regions, thus using a culantro substitute becomes necessary in most parts of the world. Here is the list of best possible alternatives to culantro that you can use:

The closest culantro substitute is cilantro as they both share similar flavor and appearance. However, culantro has a very strong flavor than cilantro. Use cilantro in any recipes that call for culantro and vice versa. To your advantage, cilantro is widely cultivated and easily available in most parts of the world at an affordable cost.

Cilantro being low on pungency and aroma use it in much more quantity to replace culantro. Importantly, add cilantro to your dish towards the end of cooking.

Papaloquelite aka papalo (also known in other names like yerba porosa and quilquina) is a Mexican herb that is closely similar to culantro and cilantro both in flavor and aroma. Papalo has a more appealing flavor than culantro as it tastes like a cross between cilantro and arugula.

Just like culantro, papalo is grown in tropical regions of Central and Latin America, and the Caribbean. Use papalo as a substitute for cilantro and culantro in a pinch.

Rue, common rue or herb-of-grace, is a species of Ruta grown as an ornamental plant and herb native to the Balkan Peninsula. In European cooking, this herb is mostly used for flavoring cheese and alcoholic beverages. Ethiopians use it in meat dishes, salads, and for flavoring coffee. In an emergency, rue is a manageable alternative to culantro especially in cooked dishes and as a salad green.

Like culantro, Thai basil is loved for its pungent aroma and flavor. It isn’t a perfect substitute for culantro yet usable in cooked dishes and salads that call for culantro. Thai basil is less pungent than Culantro but has a stronger aroma similar to anise.

Culantro is a culinary and medicinal leafy green/herb commonly used throughout the West Indies and several countries in Latin America. It is closely similar to cilantro as they both have a similar pungent aroma and flavor. In a pinch, the most suitable substitutes for culantro are cilantro and papalo.

What’s a good alternative to epazote?

Looking for a Mexican oregano substitute?

What to use when I don’t have fenugreek leaves?

What is the best substitute for parsley?