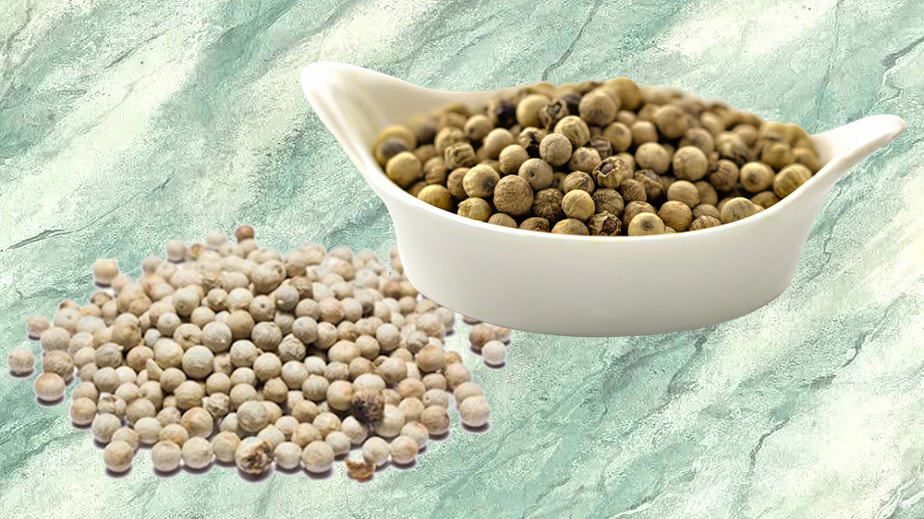 What Is White Pepper?

White pepper is made from the berries of the pepper plant known as Piper nigrum. Unlike the black pepper, white peppers come from fully ripe red berries. When the peppery berries are fully ripe, the skin is removed and dried to make the white pepper. The white color is the natural color of the inner seed without its outer skin layer.

Usually, the ripe red peppers are picked and kept immersed in water for a few days, and this leads to fermentation and shedding of the soft outer layer of the pepper. In this process, the peppercorns not only lose the skin but also a good bit of piperine compound that gives heat to pepper. Thus, the white peppercorns aren’t spicy as their black counterpart.

The dried white pepper is used as either ground or whole peppercorns in cooking and alternative medicines.

The difference between black and white peppers comes down to how they are picked and processed. The black peppercorns contain the outer layer (skin), but this layer is removed to make the white pepper.

The black peppers are spicier because of the piperine that is densely present in the skin of the pepper berries. White peppers are less spicy but more earthy and musty.

Black pepper is rich and bolder and has a strong pungent aroma. They are a spicy seasoning ingredient while the white pepper is used for spicing up dishes that just need a mild kick. Black peppers are suitable for colorful dishes but white pepper goes well with light or cream-colored dishes.

Black pepper has a longer shelf-life of up to 3 years if preserved in an airtight container. The white peppercorns will stay good for up to 2 years but they tend to lose their heat and flavor within a few months.

White pepper has a less complex flavor than black pepper. It is more earthy and musty, whereas, the black pepper has more spicy heat because of its high piperine content.

In fact, white pepper becomes mild because of the fermentation process involved in the making process that washes out compounds like piperine from the corns.

White pepper is chosen over black pepper either for mild flavor or appearance. For example, it works great in creamy soups, whipped potatoes, vichyssoise, or clam chowder because of its creamy white color. Most chefs use white peppercorns in light-colored dishes like macaroni salad, or creamy sauces.

Preferably, white pepper should be added to the already cooked dishes because overheating can release a bitter flavor. 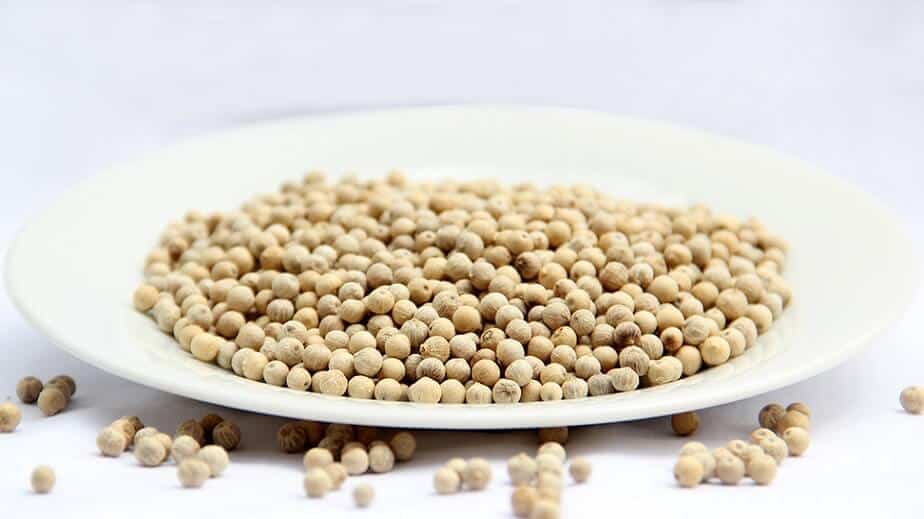 What are the health benefits of white pepper?

White pepper (especially the piperine compound in them) is expected to promote gut health and boost digestion and immunity. They aid in lowering high blood pressure. They also contain trace amounts of vitamins and minerals like vitamin C, manganese, iron, and calcium though you won’t be consuming enough pepper to get the adequate amount.

How to store white pepper?

White pepper has a shorter shelf-life than its black counterpart. Keep them stored in an airtight container away from heat and dampness. Whole white peppercorns will stay good for up to 2 years but ground white pepper will lose its potency within a few months.

What is the name for white pepper in Hindi?

Where to buy white pepper?

White peppers, both whole, and ground, are available in most groceries and supermarkets. You can also easily buy them from online stores. Some of the popular brands include Kroger, Phu Quoc, and Badia spices.

What are penja peppers?

Penja pepper (Poivre de Penja) is a type of pepper (Piper nigrum) grown in the volcanic soil of the Penja Valley in Cameroon. This pepper is known for its bright, lingering flavor and is a preferred choice of Michelin-starred chefs and upscale restaurants around the world.

What is the price of white pepper?

For further reading, find all the facts on Cubeb Pepper a pepper similar to black pepper.