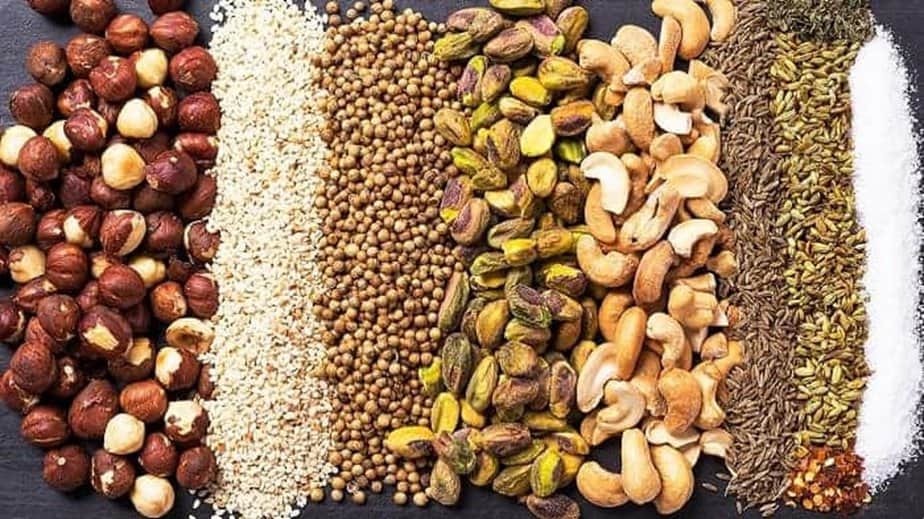 Dukkah is an Egyptian spice blend made from a mixture of ground spices, nuts, and seeds. Like every other regional spice mixture, this seasoning blend has found its way onto genre-pushing menus in Cairo, Beirut, and Doha.

The importance of this condiment in Egyptian and Middle Eastern cuisines is equivalent to garam masala in Indian cooking, jerk seasoning in Jamaica, or curry powder in the U.K.

This article explores the ingredients, uses, flavors, and benefits of dukkah, as well as the best substitutes for dukkah.

TABLE OF CONTENTS
What Is Dukkah?
Dukkah Ingredients
Ways To Use Dukkah
Best Substitutes For Dukkah
How To Make Dukkah Spice Blend
Dukkah Vs Zaatar

Dukkah (pronounced doo-kah) gets its name from the Arabic word for “to crush” or “to pound,” which is precisely how this condiment is made. In some palces it’s also spelled “duqqa“.

It’s a versatile Egyptian nut and spice blend that’s frequently used as a garnish. It’s a flavorful, ready-to-eat condiment that adds crunch to dishes that need it.

Dukkah is often served as a topping on a variety of dishes like grilled vegetables, scrambled eggs, or fried fish.

Sprinkle this spice mixture over salads or add it to labneh or yogurt dip.

For a savory flavor, simply combine dukkah with olive oil and sprinkle it over your pita bread.

The taste of dukkah varies according to the ingredients used, especially, since the different nuts have the strongest influence on its overall taste profile.

The traditional blend of dukkah tastes earthy and bold enough to complement a wide range of foods. The spices like cumin, coriander, and peppers give it a mild heat and tanginess.

To make authentic dukkah, use ingredients like coriander, cumin, sesame seeds, dried herbs, peanuts, and kosher salt. In addition, hazelnuts, sunflower seeds, almonds, walnuts, or pistachios may be included in it. Usually, toasted nuts and whole spices are used in an authentic dukkah recipe.

On the whole, it’s an adaptable mixture, and you can experiment to find a version you love.

There isn’t a uniform texture profile for this spice and nuts mixture; ingredients can be coarsely crushed or powdery.

Ways To Use Dukkah

This versatile stuff is a worthy all-purpose flavorful spice blend that every kitchen shelf should have, especially for those who enjoy Middle Eastern cuisines.

Use it as a snack with bread and olive oil, as a crust for your meat, as a nutty topping, or to rub anything from fish, chicken, or roasted vegetables to soups and salads. Avocado toast will taste great with it. It very well complements olive oil and bread.

In Middle Eastern gourmet cuisine, a common snack is khubz (pita bread) dipped in olive oil before being dunked in dukkah seasoning. This Asian condiment can add a crunchy texture and nutty complexity to dips like yogurt, hummus, or labneh, as well as brighten up vegetables and salads.

Use this blend of spices and nuts as a rub for different meats like chicken, beef, or lamb.

Just like many Australians love to do, you can just eat dukkah on its own.

If it’s made with coarse or partially crushed nuts, then it can be nibbled on like a bar snack.

In many parts of the Middle East and Egypt, dukkah is packaged in paper cones and sold as a snack.

Have you run short of this Egyptian seasoning? Looking for a dukkah substitute?

If you are in Egypt or the Middle East, ready-to-use dukkah is commonly sold in grocery and snack shops. In most places, it’s available from online vendors. But if you are unable to get it immediately or prefer to use something else, you may consider any of the below-listed dukkah substitutes.

Tsire, also known as suya, is an African spice blend used for coating kebabs. This spice blend with ingredients like peanuts, ginger, and red chilies, along with salt, is popular in Nigeria and Ghana. As different variations exist, tsire may include additional ingredients like cinnamon and cloves, but peanut remains a constant ingredient. Tsire is a good substitution for dukkah, for they have a similar nutty, warm flavor and can be used in similar ways.

The Japanese seasoning blend Furikake, mainly used for flavoring rice dishes, is very similar to dukkah in flavor. Incidentally, you’ll find many varieties of furikake with few differences in ingredients. It includes ingredients such as roasted sesame seeds, shiso, sugar, and others. Use furikake instead of dukkah exactly in the same ways. Also, see if any of the furikake substitutes can be used in your cooking.

Chaat masala, a popular Indian spice blend, is used for adding flavor to fruit salads made with papaya, apples, or bananas, or sprinkled on fruit, egg toasts, boiled potatoes, and others. The ingredients like cumin, chile powder, and coriander in chaat masala give a warm flavor akin to dukkah.

Zaatar is another frequently used spice mixture from the Middle East that has sesame seeds and herbs like thyme, oregano, savory spice. Zaatar and dukkah are a lot similar in uses and flavor. It’s often used on grilled meat, sprinkled on hummus, or used as a bread spread (flatbread/kubuz) in combination with olive oil. Zaatar is a good substitute for dukkah for both have sesame seed as the base ingredient that renders a nutty flavor.

How To Make Dukkah Spice Blend

Today, pre-made dukkah is available in many spice shops and grocery stores near you. But this easy recipe for a seed and spice blend tastes best when you make your own dukkah at home.

The authentic dukkah nut and spice blend have the best flavor and aroma when it’s made with freshly toasted ingredients. Start by toasting the raw nuts and seeds as you proceed with this amazing recipe.

Dukkah and zaatar are very different, though they share a few common ingredients.  Yet, these two are often considered a substitute for each other.

The key ingredients in Zaatar are a family of culinary herbs like thyme, oregano, marjoram, and savory. Besides these herbs, it includes roasted sesame seeds, dried sumac, and salt.

Zaatar lacks the strong nutty flavor and warm taste of cumin and coriander in dukkah. Dukkah is more of a crunchy blend of nuts and spices and lacks the herbaceous flavor of za’atar. Dukkah is a real textural treat with nutty dominance, while zaatar is overwhelmingly herbaceous with a slight crunchy nuttiness rendered by sesame seeds. However, sesame is the prominent ingredient in both of these mixtures.