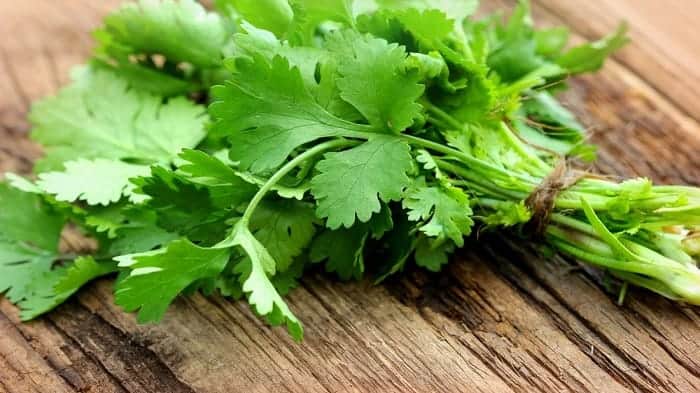 Is cilantro the same as coriander? What is cilantro good for? There are many more such questions to be answered. This article brings to you a quick overview of cilantro with all the basic info you need.

This delicate herb with lacy green leaves looks like parsley. This highly versatile herb is an integral part of several recipes, especially in Mexican and Asian cuisines.

TABLE OF CONTENTS
What is cilantro?
Are coriander and cilantro the same thing?
What does it taste like?
Is cilantro a vegetable?
How to use cilantro in cooking?
Where to buy it?
How to store cilantro?
FAQs

Cilantro and coriander are part of the same plant species — Coriandrum sativum. It’s an herb that belongs to the parsley family (Apiaceae), and this herb is also known in different names like Mexican parsley, Chinese parsley, or coriander plant. In the UK and Asian countries ‘cilantro’ refers to fresh coriander leaves.

The leaves of the plant resemble those of carrots, also a lot similar to the flat-leafed parsley. If allowed to bloom, this leafy plant produces clusters of pinkish-white flowers that bear round, brown, and very lightweight seeds. Cilantro seeds are used to make coriander spice. The leaves and seeds are totally different in flavor and use.

Are coriander and cilantro the same thing?

Outside the North American region, the name coriander refers to fresh leaves and stems, while its dried seeds are called coriander seeds.

Coriander seeds are used as a cooking spice, an important ingredient in Indian and Asian cuisines. Cilantro leaves are mostly eaten raw or for garnishing a variety of dishes.

Fresh cilantro tastes pungent and lemony. You’re sure to feel a mild peppery note in this herb. In fact, it is a stronger version of parsley, with a tangy citrus flavor.

Interestingly, many dislike cilantro for its soapy taste, at the same time most people never experience such a taste in cilantro. The leaves of cilantro contain a natural aldehyde chemical that is responsible for the soapy taste. Not all people can detect aldehydes in the taste buds.

Never cook cilantro leaves as this would lead to the loss of its flavor and texture.

Is cilantro a vegetable?

Cilantro is a member of the Vegetables and Vegetable Products USDA nutritional food group. All parts of the cilantro plant are edible, but generally, the fresh leaves and dried seeds of cilantro are used in dishes. It’s used as a flavoring ingredient than a core vegetable like cabbage, cauliflower, or others.

How to use cilantro in cooking?

Before using, pick off the cilantro leaves and discard the stem, and remove the dirt from the leaves. With the help of a sharp nice mince leaves into the desired size. If you are making sauce or pesto, you can grind the stems as well in a vegetable grinder.

Cilantro loses its flavor when cooked, thus add the leaves to the dish at the end of cooking or as a garnish.

As far as possible, always use fresh cilantro to enjoy the bright herbaceous flavor.

Cilantro is a common ingredient in a wide array of Indian dishes like curries, soups, and stews, in Mexican salsa, and Yemeni zhug and Moroccan chermoula.

Where to buy it?

Cilantro is a cool-season herb. It grows best in the spring and fall and can even withstand light frosts. A steady supply of fresh cilantro herb is available most in most months of the year. Cilantro leaves are usually sold in bunches at the vegetable produce section of most markets. Most supermarket stores also sell dried cilantro in the spice section. In ideal conditions, this herb can easily be grown in the backyard of your kitchen.

How to store cilantro?

Cilantro leaves are soft and feeble, and they do not stay fresh for more than a day in normal conditions. Wash the leaves only just before use. Placing the stems in a glass of water and covering up the leaves in a loose plastic bag can preserve the freshness of the leaves for up to a week. Storing them in a refrigerator can keep them fresh for more than a week.  More advanced methods for storing cilantro for a longer period involve blanching, freezing, making cilantro oil, or making cilantro compound butter.

What is cilantro good for?

Cilantro is an antioxidant-rich herb that has many culinary uses and health benefits. The antimicrobial and antioxidant compounds in this herb may fight infections, lower blood sugar, and promote, brain, heart, skin, and digestive health.

Cilantro contains the soapy-flavored aldehydes compound. Because of variations in a group of olfactory-receptor genes, some people strongly perceive aldehydes in cilantro leaves.

The taste of cilantro is slightly spicy with a hint of citrus.

How to use cilantro?

Whole or minced cilantro leaves can be used to flavor or garnish a wide array of dishes. For example, use it for spicing up sour cream, spice up pasta salads, flavoring stir-fries, salad dressing, for making a quick coleslaw, or sprinkle them over your curries.

What are the differences between parsley and cilantro?

Is Culantro Same As Cilantro?

Can Cilantro Be A Substitute For Mexican Oregano?