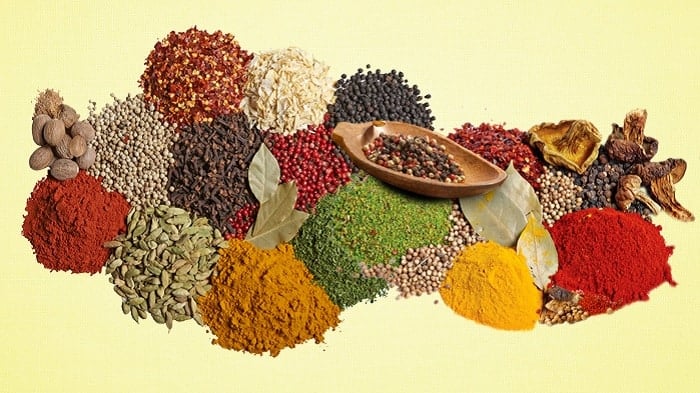 Spices play an important part in cooking around the world. Numerous dishes enormously depend on spices for their wonderful flavor and aroma. So much so, the addition or omission of spice can even literally make or break a dish.

Spices along with seasonal herbs immensely enhance the flavor and aroma of vegetable, fish, egg, and meat dishes.

TABLE OF CONTENTS
What Are Spices?
Spices In History
Uses of Spices In Cooking
How to Properly Store Spices?
Guidelines On Purchasing Spices
Commonly Used Spices And Herbs In Regional Cuisines

Definition: “A spice is bark, seed, root, fruit, or other plant substance primarily used for flavoring or coloring food.”

Spices and herbs are different though they all belong to plants. Generally, herbs are fresh parts of the plants like leaves, stems, or flowers used as a garnish or for flavoring foods.  Whereas, spice means dried roots, dried stalks, seeds, or dried fruits of the plant and is almost always dried not fresh.

A spice helps in flavoring and seasoning a recipe but is not used as the base ingredient.  There are about 200 varieties of spices with unique flavors and aromas used in different cuisines across the world.

The spice trade was involved historical civilizations in Asia, Europe, and Northeast Africa. As world history suggests, several battles were fought in the Middle Ages by the European and Middle Eastern traders to take control of the spice trade, especially to acquire spices from India and China. The well-known Silk Road was a fearsome trade route that went from China to Europe. In the era of European exploration, many trades and travel expeditions were made by European explorers in search of spices and perfumes.

Most sought-after spices such as cinnamon, black pepper, cardamom, ginger, nutmeg, star anise, turmeric, and clove were used in antiquity and aggressively traded in Asia in exchange for precious stones and gold.

Uses of Spices In Cooking

Today spices are ubiquitously used in cooking for adding unique taste, aroma, and texture to all types of dishes. Here are the major benefits of using spices in your dish:

Flavor: Different spices can add a variety of unique tastes to any dish, an extra addition to five basic tastes such as sweet, sour, salty, bitter, and umami. Each of the spices can have one or more tastes like earthy, floral, fruity, herbaceous, hot, cooling, nutty, sulfury, pungent, piney, spicy, or woody.

Aroma: Most spices have a unique sweet aroma that is often a great appetizer, a deciding factor that compels one to eat a dish. Most spices have a powerful fragrance that spreads deep down in the dish with fragrance emanating all around. The best-known aromatic spices include garlic, rosemary, basil, parsley, thyme, marjoram, chili pepper, sage, saffron, and cumin.

Changes Taste: Most foods taste bland without spices or herbs unless they are plain dishes which only need salt. Seasonings like salt and Ajinomoto enhance the taste of a dish but spices and herbs add vibrant tasty flavors to your dish.

Appearance: Spices like turmeric, saffron, or annatto seeds are often used to add vibrant colors to food. Paprika powder not only makes your dish hot but also adds deep red color to it. Most spices do have some effects on the color and appearance of your dish.

Seasoning: Seasoning can be sweet, savory, acid, or bitter. The most commonly used seasonings are salt, pepper, or acids (vinegar or lemon juice). However, many spice blends like adobo seasoning, BBQ seasoning, Cajun seasoning, apple pie spice, and others are popularly used for seasoning or as spice rubs.

Nutrition: Each spice is rich in different antioxidants, minerals, and vitamins. In addition, they contain several medicinal properties which have a direct effect on many common ailments. Spices add only a few calories to your meals and are gluten-free as well.

How to Properly Store Spices?

Spices must be stored in an airtight container and kept in a dry, cool place. Direct exposure to heat, sunlight, or humid conditions will reduce their shelf-life. Also, spices start to lose their flavor when they are ground therefore whole spices are best for preserving and grind them just before you use them in your dishes.

Do Spices Expire? Dry spices usually don’t spoil or rot though they will lose their flavor over time. Using freshly ground spices gives out maximum flavor and aroma. Ground spices stay fresh for about 6 months and whole spices for up to 2 years.

Preferably, buy fresh spices in small quantities, just enough to meet two to three months’ requirement. Also, for each spice note the date of purchase and label it on the spice rack.

As a best practice, make sure to replace all your ground spices once a year, if affordable even the whole spices as well.

Buy new spices when you find that old spices in your pantry have faded color and aroma. Buying spices in November and December can be profitable as large scale fresh spice sale kicks off in the supermarkets for holiday baking.

Here is the list of spices and herbs most commonly used in regional cuisines:

READ NEXT: Herbs And Spices Pairings For Foods