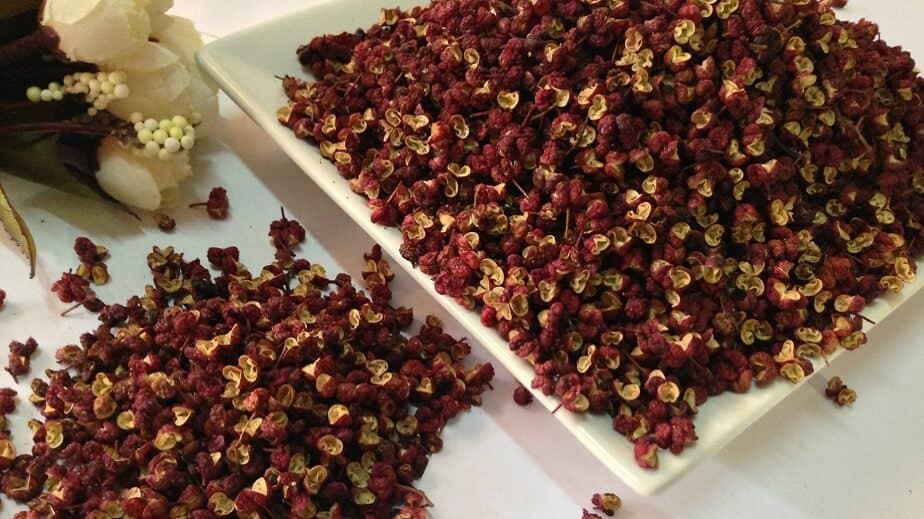 The classic taste of many traditional Chinese and Taiwanese dishes is heavily dependent on Sichuan peppercorns.  It’s mouth-numbing when used with hot chili peppers, the numbing effect of this pepper mellows down the heat and brings out the intensely fruity, sweet taste to the forefront. Overall, they aren’t a spicy hot pepper like the black peppercorns, but their mouth tingle helps to enhance the taste.

What Is Sichuan Peppercorn?

Sichuan peppercorn is a spice formed from the husks enclosing the berries of prickly ash shrub, Z-anthoxylum, which belongs to the citrus family of plants.

Only the pinkish-red husks around the seeds are used for the Sichuan peppercorn spice and the actual seed is discarded.

Sichuan peppercorn is one of the chief ingredients in the famous Chinese Five-Spice powder that is used in several savory Sichuan dishes.

The other names of Sichuan peppercorns include Szechuan pepper, Chinese red pepper, mala pepper, Huajiao in Chinese, and sansho in Japanese.

They are used in different forms such as green peppercorns (fresh), red peppercorns (ripe), dried, powder, sauces, and oil.

Like the black pepper, the Sichuan pepper also has many health benefits. This pepper is said to improve the immune system, reduce pain, increase circulation, boost appetite, reduce inflammation, and strengthen bones.

Before the arrival of hot chiles to China from the American continents, Sichuan pepper and ginger were used in North Chinese hot cuisines. In truth, Szechuan peppercorns aren’t really a pepper at all. This Chinese pepper from Szechuan is neither part of Chili Peppers (genus Capsicum) nor belongs to Piper nigrum (black pepper plant).

The prickly ash shrub that produces this pepper is native to China and Taiwan. You’ll also find similar varieties of this pepper grown in the Himalayan region.

Sichuan is the name of a province in northern China, which is also spelled as “Szechuan” in English. Again, there are distinct varieties of Sichuan pepper, the one from northern China belongs to Z. bungeanum species and the second variety native to eastern China and Taiwan is Z. simulans.

The heat level of Sichuan pepper range from 50,000 to 75,000 Scoville heat units on the Scoville scale. Often, people who use this pepper experience a heavy kick of pungency, especially when they are used whole in culinary dishes with their seeds and outer membranes intact.

The medium-level heat of Sichuan pepper is comparable to the heat of Thai Hot Peppers, Chilitepin, and Santaka chili peppers. When compared to the average heat of jalapenos, it’s up to fourteen times hotter.

Sichuan food is most well-known for its hot and spicy flavor with sweetness and sourness altering flavors. Its aroma has a close similarity to lavender.

At the first bite of this peppercorn, it tastes slightly bitter and then a numbing heat, followed by citrus notes. The numbing sensation it creates in the mouth is something unique due to its special chemical composition (combination of hydroxy-alpha sanshool and capsaicin).

Sichuan pepper is not as hot as the black peppercorns, but the mouth tingle caused by this peppercorn enhances the taste of other ingredients in your food.

How To Use Sichuan Peppercorns?

Usually, the peppercorns should be roasted and ground before their use in recipes. First, remove from the corns any twigs, leaves, and tiny black seeds. After that, heat the peppercorns in a frying pan over medium-low heat till they produce a smoky fragrance. After cooling, crush or grind the corns. Roasted Sichuan peppercorns can also be saved in an air-tight container and grind the required amount of corn just before use.

Note that the black seeds inside the peppercorns are tasteless and they only add black specks to your dish. Only the pink husks around the seeds are useful in cooking. Therefore, before you start grinding the roasted corns, look through the peppercorns and discard any black seeds you find.

Sichuan peppercorn is most commonly used as an ingredient in Chinese five-spice powder that includes fennel, aniseed, cinnamon, and clove.

Szechuan peppercorns are also used as a fragrant, mouth-numbing spice in several Sichuan dishes like Dan-Dan noodles, and Szechuan Chicken. It is an excellent pairing with meat.

Where to Buy Szechuan Peppercorn?

Generally, the Sichuan peppercorns are available in groceries selling Asian spices and spice purveyors. Note that it may be labeled in different names such as flower pepper, dried prickly ash, Indonesian lemon pepper, dehydrated prickly ash, or the Mandarin name of Hua jiao.

In the US, the Sichuan pepper was banned from import from 1968 to 2004. The ban was imposed to prevent the spread of citrus canker, which damages the citrus crops but they don’t cause disease in humans. In 2004 the ban was lifted on heat-treated Sichuan peppercorns that do not have infectious organisms. 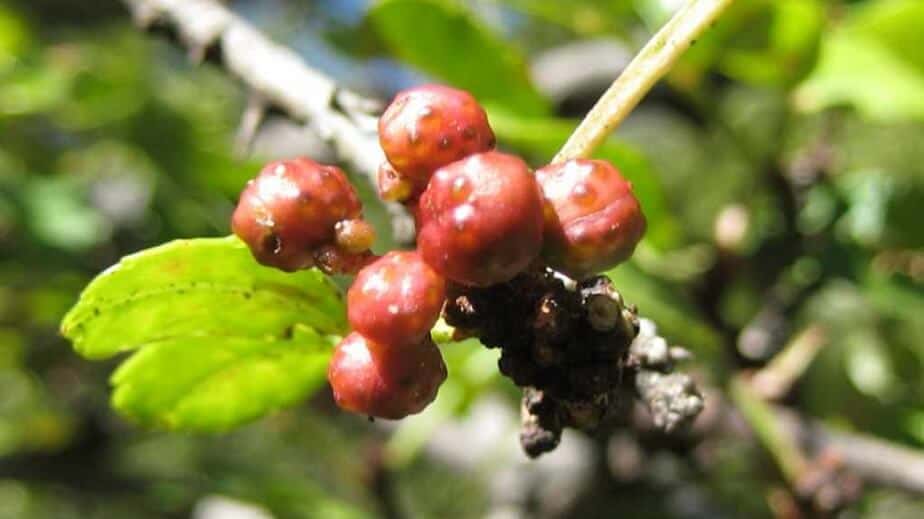 Huā Jiāo (meaning “flower pepper” because of the shape), better known as Szechuan pepper, has the appearance and size similar to black pepper, but with a split-open pink-red husk. They mature from green to pink-red berries on a prickly ash shrub. When dried or roasted, the little black seeds inside the corns drop off through a split-open husk.

How to store Sichuan pepper?

Store the roasted Sichuan peppers in an airtight sealed jar away from light and excess dampness. The whole peppercorns will stay good for up to 2 years. They should be ground just before use.

What are the best substitutes for Sichuan pepper?

Green Sichuan peppercorns aren’t spicy-hot compared to the ripe red peppercorns. Green peppercorns have a citrusy taste and produce numbing micro-vibrations in the mouth when eaten. Like the green chiles, they are used in classic Sichuan cuisines.

What is Sichuan Peppercorn oil?

Sichuan peppercorn oil is neutral oil extracted from the corns, a fragrant spice with a mild floral, lemony taste and numbing effect on the mouth. This oil adds a fragrant pepper flavor to stir-fry, sautéing, or dipping sauce, or you can add to any dishes to give them a little zing.

They aren’t poisonous or detrimental to health but regular consumption of this pepper may lead to a compulsive habit-forming item. Similarly, consuming them in excess amounts can cause toxic effects on the body but are not fatal.

How long do Sichuan peppercorns last?

Sichuan peppers don’t go off fast but their numbing effect and fragrance will gradually decrease over a period. Roasted whole peppercorns sealed in an airtight container would last for up to two years. Ground peppers tend to lose their flavor and aroma quicker, so use and finish the powder within a month or two.

For further reading, all the important facts on Grains of Paradise spice including its flavor, uses, and benefits.