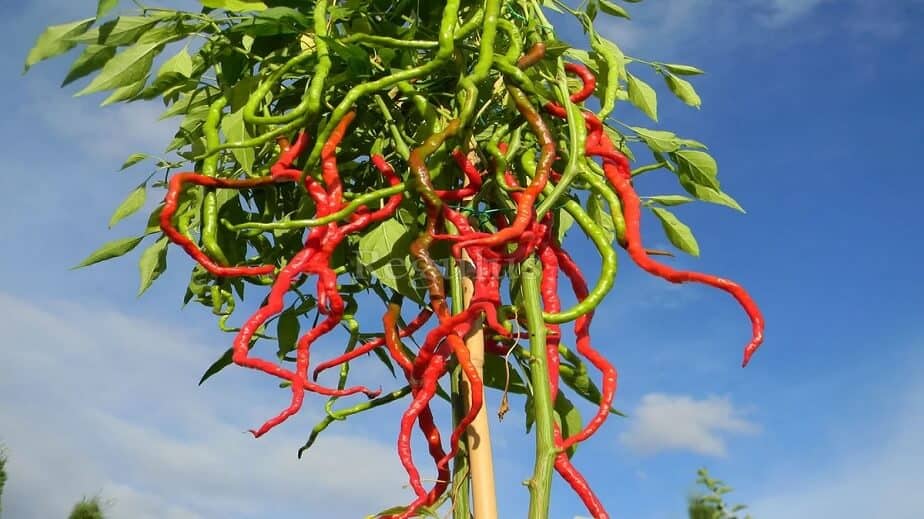 What Are Thunder Mountain Longhorn Peppers?

The Thunder Mountains (Mountains of Leigongshan) that lay southwest of Guizhou in China was a natural fortress of ancient China. This is a fertile region that provides for the abundant growth of several types of chilies, fruits, and vegetables.

Records indicate the longhorn chili from Guizhou to be the longest chili in the world with an incredible length that can reach up to 40 cm. It’s a genuine heirloom pepper that belongs to the Capsicum Annuum species.

The plant grows to about 75 cm tall and is a prolific producer; can be planted in large pots with stacks to support it.

The heat level of this pepper ranges between 20,000 and 40,000 Scoville Units on the Scoville Scale. It’s a  medium-hot pepper with a heat rating of 3. In comparison to common Jalapeno, Thunder Mountain chiles are 5 to 9 times hotter. The spiciness of this pepper is in the same range of peppers such as Cayenne, Tabasco, Pequin, Aji Amarillo, and Aji Charapita.

The Thunder Mountain Longhorn peppers are an extra-large version of the longhorn pepper. The average length of the pepper is about 30 cm and slightly thicker than the regular cayenne pepper. The peppers hang down from the plant like spiraled pieces of rope with a horn-like tail end. They are tapered and have twists, curls, curves, and smooth bumps on the full length of pepper. They start off light green color and turn into deep red color when they mature.

This pepper has a fruity sweet flavor with a mild citrusy note. In comparison to cayenne, they are mild with just a very mild tingle but have a better taste. The sun-dried chilies seasoned in a charcoal heated oven-like mud-house have a smoky flavor in addition. In fact, the smoke-dried Mountain Longhorn peppers taste as good as paprika does. 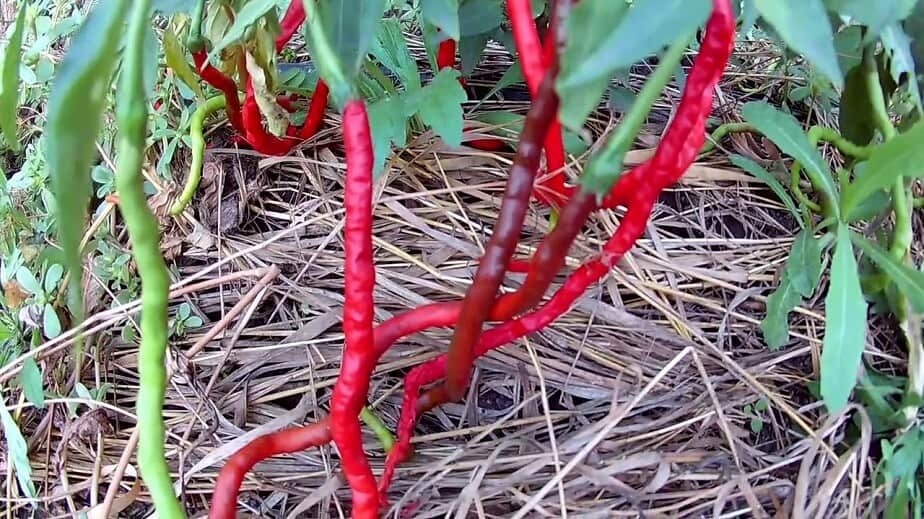 What Are Thunder Mountain Longhorn Chilies Used For?

Raw and dried chilies are utilized in Chinese cuisines. However, being a long chili with cayenne-type features, they are mostly dried, smoked, and ground to make mild chili powder. In fact, raw chilies taste bland and are rarely used in cooking. The dried chili powder is used for seasoning meat and fish dishes, and even sauces.

The longhorn peppers, popular in the Texas regions of the United States of America, are also from the Capsicum Annuum species. It’s a cayenne-type pepper somewhat similar to Cow Horn Pepper.

The major difference between longhorn and mountain longhorn is the length. Longhorn peppers grow to a maximum length of 9-10 inches, whereas their Chinese counterpart can be 14-16 inches long.

Heat-wise, Thunder Mountain Longhorn has almost double the heat of regular longhorn pepper. However, both these peppers are variants of cayenne pepper and have similar tastes and use in cooking.