Thai peppers are small in size and high in heat. The name “Thai peppers” or “chilies,” is a collective name that refers to all different varieties of chili pepper from Thailand. These several varieties of peppers differ in flavor and appearance. Their heat levels vary from 0 to 100,000 Scoville Heat Units. They can be as mild as green bell peppers or as hot as Scotch Bonnets.

Among the many varieties of chilies, the Bird’s Eye Pepper from Thailand is famous across the globe. Thus, the name “Thai peppers” is widely misunderstood as another name for bird’s peppers.

While preparing a hot and spicy Thai dish, Thai chili, also known as bird’s eye chili, is a quintessential ingredient that you cannot miss out on. These small chilies are not the hottest in the world, but they do pack a heavy punch. This article explores the best Thai chili pepper substitute to use in a pinch.

In East Asian countries, bird’s eye pepper is largely cultivated and easily available in the food market. They are part and parcel of Thai food. However, Thai chilies are quite scarce in the rest of the world. If you don’t have it or you want to try something fresh and different, then there are a few other chilies that work as Thai chili substitutes with similar flavors and levels of heat.

Here are the best alternatives to consider:

Serrano peppers, at max level of their heat, are at least four times milder than Thai chili. Even so, serrano is a good substitute for Thai chili, as this versatile pepper can easily complement most Thai dishes that call for chili. Adding more peppers is an easy solution to raise the heat of Serrano to the level of Bird’s eye chili.

Serranos can be used in cooking just the same way as you do with Thai chilies. This thick-fleshed, 2-inch long pepper can be chopped, diced, or pureed to be used in your dishes.

Interestingly, you’ll find that these days many farmers in Thailand are increasingly cultivating serrano peppers. Undoubtedly, this pepper has become the most preferred alternative to Thai chili, especially for those who love moderately spicy chili.

Serrano is also a bright chili with a lot more bite. Everyone would love its crisp and moderate grassy flavor that goes well with many cuisine styles. Indeed, fresh serrano pepper is an outstanding replacement for fresh Thai chilies. Also, some of the substitute peppers for serrano might work in place of Thai chilies.

Jalapeno pepper is a great substitute for most other peppers because of its easy availability across the globe.

They taste very much like serrano peppers, but with lower heat. Similar to Thai chilies, fresh jalapenos are green with a mild grassy flavor.

The typical jalapeno pepper is 15 times milder than the average Thai chili. Despite the considerable difference in heat, they are a good stand-in for Bird’s eye chili. A versatile chili that easily fits into most dishes that call for Thai chili. Both can be used in the same way in your recipes.

Note that the heat range of jalapenos can vary according to their origin, so care should be taken to balance the heat level before adding too few or too many to a dish. Usually, you have to add about double the number of jalapenos to achieve the same heat level as the former. See also if any of the jalapeno substitutes will fit into your recipes.

Cayenne pepper is a popular hot chili pepper, easy to source, and is commonly used in Cajun dishes. Importantly, the heat level of this pepper comes very close to that of Thai chili; it is almost half the heat of Thai chili. They both share a similar flavor and can be used interchangeably in most dishes. The subdued flavor of cayenne does not overpower the original taste of your recipe. Cayenne powder is often used in cooking rather than in the fresh green form. 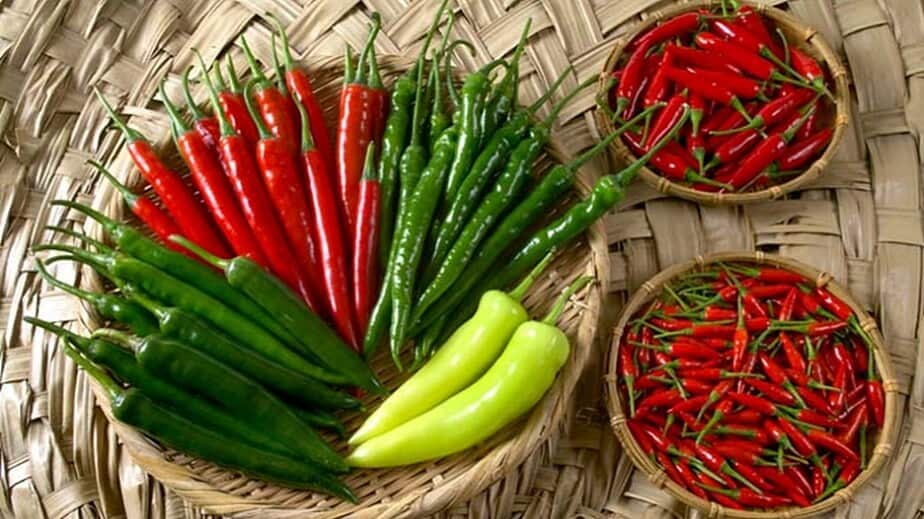 How many serrano peppers equal a Thai chili?

It depends on the type of Thai chili pepper you are using. Usually, the heat produced by one bird’s eye pepper is equal to 3 serrano chilies. Thai chilies are smaller in size but hotter than serranos.

What type of pepper is a Thai chili?

Thai chili can mean any type of chili pepper from Bangkok, and there are about 79 varieties of it. However, the most commonly used hot chilies in Thai cooking are Prik Kee Noo (bird’s eye pepper), Prik Chee Fah, and Prik Jinda. They are comparatively small chilies in size, but their heat can measure up to 100,000 SHU.

Can I use chili flakes instead of fresh chili?

The spiciness of Thai chilies varies according to the type of chili you have at hand. The most commonly used varieties of chili in Thai cooking are Bird peppers and Prik Jinda, and they are hot chilies with an average heat of 75,000 SHU on the Scoville scale.

Can I substitute habanero for Thai chili?

For further reading, also have a look at the interesting facts about Thai Red Curry Paste and the best substitutes for green chilies you can use in your dishes.