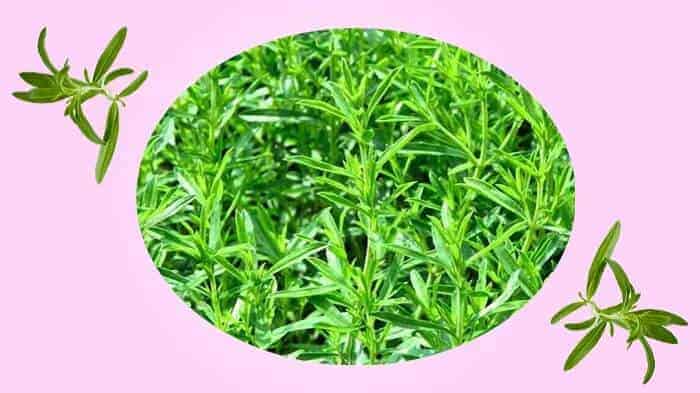 For hundreds of years, savory has been in use for cooking and as an herbal remedy for a few common health conditions. In the Roma era, savory was also known as the “herb of love” because this aromatic herb was used to make love potions; also it is well known for its aphrodisiac qualities.

Savory has two main varietals used in cooking: summer and winter savory. Both the varieties are native to the Mediterranean region and commonly used in European cooking.

This article explores the specific features of summery savory including its uses, substitutes, and flavor profile.

What Is Summer Savory?

Summer savory (Satureja hortensis) is among the most popular of the savory genus. This annual herb is one of the widely used herbs in Mediterranean cooking along with others like parsley, sage, rosemary, thyme, oregano, and marjoram.

This aromatic herb that belongs to the mint family is native to the sunny slopes of the Mediterranean region.  It grows to a height of 12-18 inches and features multiple branches of small stems growing narrow dark green leaves. Blossoming takes place by mid-summer and they adorn small lilac, white, or pink flowers with seeds

Savory has been there from ancient times and is well utilized for its medicinal properties and was a beloved ingredient for making love potions. Despite the lack of scientific evidence, they are still being used for cough, flatulence, stomach pain, diarrhea, poor appetite, and other conditions; and it works.

Among the different genus of savory, summer savory is used more widely than winter savory.

Both of them have a similar flavor that is common to all plants in the mint family like thyme, rosemary, and marjoram.

Summer savory: is a spicy herb but sweeter than winter savory. It’s a delicate plant with small light green leaves on small branches growing in clusters. Besides the Mediterranean regions, this herb is most popularly used in Acadia, a region along the Atlantic coast of Canada. The hot and peppery flavor makes the summer savory more like a spice unlike the herbaceous winter savory.

Winter savory: has a unique aroma that is reminiscent of the winter season. This herb has well-pronounced hints of pine and sage. Unlike the annual summer savory, it’s a perennial hardy herb that grows in the rocky mountainous regions of the Mediterranean.  Winter savory is more earthy and subdued than summer savory.

Summery savory is a highly aromatic herb and has explicit flavor traits like hot and peppery notes. Distinguishable features of thyme, mint, and marjoram are core flavors common to all varieties of savory. In comparison to winter savory, it’s slightly more spicy and flavorful but milder than thyme and mint. Summer savory is slightly sweet, unlike the winter savory that is more bitter and earthy in taste.

Summer savory is compatible with a wide array of dishes just the same way thyme is.

Dried or fresh leaves of summer savory can be used in cooking depending on the requirement of the recipe.  It’s commonly paired with pork, lamb, stuffing, sauces, beans, and vegetables. Besides its uses in common dishes, this aromatic herb is used mainly in four ways:

Seasoning: Savory works great for seasoning and as a meat rub. Rub the summer savory into meats like chicken, beef, or pork to release the hot peppery flavors before grilling or roasting.

Herbes de Provence: Savory is one of the core ingredients used in herbes de Provence, a seasoning herbs mixture popular in the southeast region of France. It’s a flavorful addition to other herbs such as thyme, rosemary, marjoram, and oregano.

Vinaigrette: Add a cup of summery savory leaves to a quart of white wine vinegar. The pungent oil from savory leaves when blended with the acidity of the vinegar, they turn into a flavorful condiment that can spice up your dish. Vinaigrette works well for flavoring salads, sauces, soups, and roasted vegetables.

Salt substitute: It goes long back to the Roman culinary tradition in which savory was used as a salt substitute. In some recipes, people continue to use this herb in place of salt and also a nice option for people who need to avoid salt for health reasons.

What Is A Good Summer Savory Substitute?

Summer savory is mostly cultivated in the Mediterranean region thus it’s not easily available in many parts of the world. If you don’t have this herb, use one of the summer savory substitutes we have listed below:

Savory and thyme belong to the same family of mint, and they are similar in many ways. Like savory, thyme is included in herbes de Provence and compatible with most dishes that call for savory. Additionally, you’ll easily find fresh and dried thyme on sale at most grocery stores.

Thyme is the closest substitute for summer savory, as they both have similar appearance and flavor. Use thyme in place of summer savory in the same quantity.

The pungent and piney taste of sage is a close match to summer savory. The leaves of sage are wider than savory, therefore, use the minced fresh leaves of sage to replace savory in your recipe. Just like savory, sage leaves are also a good seasoning ingredient, as well as useful for making a vinaigrette. As a substitute, use sage in 1:1 measure instead of summer savory.

Marjoram has flavor features of basil and thyme that resonate with the pungent, piney notes of summer savory. Marjoram is herbaceous and moderately sweet like summer savory. However, delicate leaves of marjoram cannot stand up to prolonged cooking, unlike savory. Thus add marjoram leaves to your dishes towards the end of cooking and use it in equal quantity as the amount of savory actually required in your recipe.

A single herb alone cannot effectively substitute another herb for each herb has a distinct and complex flavor profile. Thus, using a combination of two or more herbs works well as a substitute for any herb.

Here are a few combinations of herbs to use as summer savory substitutes:

Summer savory is an annual aromatic plant of the mint family, used as a culinary and medicinal herb. It’s a flavorful seasoning ingredient that renders moderately sweet, hot, pungent, and piney flavors to your dish. Thyme, sage, or marjoram would work well as a summer savory substitute.

Try these substitutes for lemon thyme in your recipe.

What can I use instead of elderflower?

What is a good substitution for epazote?

What is similar to Mexican oregano?