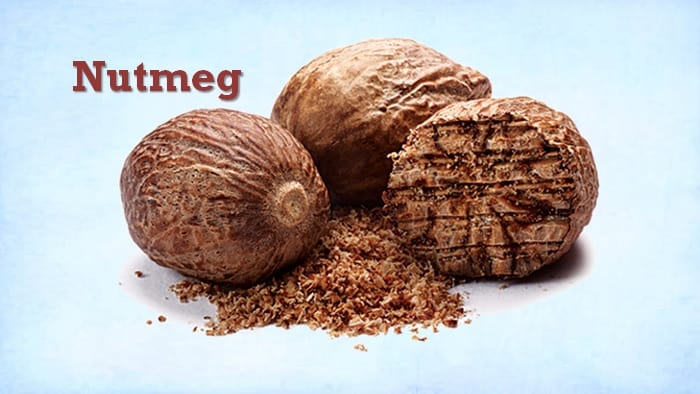 Nutmeg, (Myristica fragrans), is a tropical evergreen tree and the spice made of its seed. The fleshy arils or lacy coating around the nutmeg seed are the sources of spice mace.

The spice nutmeg has a distinctive pungent fragrance and a slightly warm sweet taste. It’s an important spice with several uses in cooking. Its sweet and nutty flavor is a wonderful addition to several sweet and savory dishes.

Are you cooking a recipe that includes spice nutmeg and finds that you’ve run out of it? Don’t worry. There are enough numbers of spices that you can use for replacing nutmeg in an emergency.

This article brings home to you 9 nutmeg substitutes that will save your recipe.

Beyond question, mace is the best substitute for nutmeg you can confidently lay your hand on.

The nutmeg spice is the ground or crushed seed of the Myristica fragrans tree. On the other hand, mace is the fleshy, lacy coating (aril) covering the nutmeg seed.

In mace spice, you have the exact flavor and aroma of nutmeg; nothing more to ask for. If you have mace in your pantry, then forget about nutmeg.

Use mace at a 1:1 ratio to replace nutmeg.

Note, ingredients of this spice mixture may vary from one region to another but nutmeg, mace, cinnamon, cloves, black pepper, and cardamom remain as base ingredients in all verities. Some variants may include additional ingredients like saffron, star anise, fenugreek, cumin, turmeric, or other local spices.

Conspicuously, nutmeg is a key ingredient in garam masala, and most other spices in it have a close similarity to it as well.

In a pinch, use garam masala as a substitution for spice nutmeg.

You can swap out nutmeg with garam masala at a 1:1 ratio.

Remark: If the pre-mixed garam masala includes peppercorns, bay leaves, or cumin, then it works best in savory dishes.

Cinnamon is a popular aromatic condiment and flavoring additive used in a wide variety of cuisines, both sweet and savory dishes.

Both Ceylon and cassia verities of cinnamon are healthy and delicious; available in sticks (whole barks) or powder form. The cinnamon powder is ideal for replacing nutmeg.

Flavor-wise, cinnamon is stronger, and use it in small amounts. Approximately, use it as much as half the amount of nutmeg called for in your recipe.

Apple pie spice is a simple mixture of autumnal spices like ginger, nutmeg, allspice, cardamom, and cinnamon.  Overall, it has cinnamon as the dominating flavor.

This spice blend works not only for making the apple pie but also for several other baked goods and apple-based desserts.

Most ingredients in it have a taste similar to nutmeg.

Use apple pie spice as much as half the amount of nutmeg required in the recipe.

The basic ingredients in pumpkin pie spice are nutmeg, cinnamon, allspice, and ginger besides a few others. This spice mixture isn’t reserved for pies only.

Pumpkin pie spice is a suitable substitute for nutmeg for it has both cinnamon and nutmeg as the dominating ingredients.

Use it at a 1:1 ratio to swap out nutmeg in both sweet and savory dishes.

Allspice, also known as Jamaican pepper, comes from the berries of the evergreen Pimenta dioica tree.

As the name suggests, it bears a combination of flavors like pepper, nutmeg, cinnamon, juniper berries. Note, it isn’t a blend of spices but consists of the berries alone.

Easy to source allspice is an excellent alternative to nutmeg.

Use allspice spice at a 1:1 ratio to substitute nutmeg.

Ginger root is a commonly used spice in several recipes. It not only makes your dishes spicy but brings in several health benefits as well.

In comparison to nutmeg, ginger is spicier and less sweet, most suitable for savory dishes. In your recipes, use either dried and ground ginger or fresh whole ginger.

To your advantage, ginger is compatible with other ingredients in most recipes that use nutmeg.

Use an equal amount of ginger instead of nutmeg in your recipes, especially in savory dishes.

Cloves are the aromatic flower buds of a tree in the family of Myrtaceae, Syzygium aromaticum native to Indonesia.

It’s quite similar to nutmeg for its mildly sweet and pepper-like taste. Notably, you’ll find several recipes that call for both clove and nutmeg.

Cloves are easily available in stores in both whole and ground forms. Preferably, use the ground cloves in place of nutmeg as this can easily blend well with other ingredients.

Substitute nutmeg with cloves in measure for measure. But if your recipe includes both cloves and nutmeg, try using another spice like cinnamon to prevent cloves from overpowering your recipe.

Cardamom is a spice made from the seeds of several plants in the genera Elettaria and Amomum in the family Zingiberaceae.

This exotic spice has a complex aroma with a piney, fruity, and almost menthol-like flavor. It’s slightly sweet and pungent like the nutmeg.

Cardamom is a nice complement to nutmeg, cinnamon, allspice, ginger, and cloves, so you’ll often see it used in conjunction with these spices.

This spice may not be a perfect substitute for nutmeg, but in a pinch, it certainly works if your recipe calls for a small amount of nutmeg.

Use cardamom in half the amount of nutmeg that is required in the recipe.

Nutmeg is a popular spice used in both sweet and savory dishes.

If you don’t have or prefer to avoid nutmeg, then you can use mace as the best substitute for it.

Other spices that work well in place of nutmeg are cinnamon, allspice, ginger, and clove. You may also use spice-blends like garam masala, apple pie spice, or pumpkin pie spice as a replacement for nutmeg.

Lastly, always start using a spice substitute in a low quantity, and if required add more towards the end of cooking.