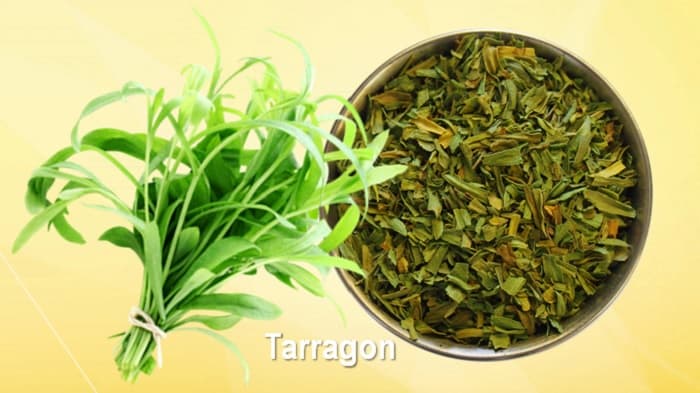 Who doesn’t like to have a French tarragon chicken or tarragon-gin lemonade? Or, what about enjoying asparagus with tarragon sherry vinaigrette? Something is really magical about this grass-like aromatic herb in forging your dishes amazingly tasty.

Though a perennial plant, tarragon leaves become scarce in some months of the year. In some regions, it’s not available daily. If you don’t have it or are allergic to it, then it’s useful to learn about tarragon substitutes. This article brings home to you the best replacements for this herb.

Tarragon (Artemisia dracunculus), also known as estragon, is a species of perennial herb in the daisy family. It’s widely grown in Eurasia and North America for culinary and medicinal uses. The skinny leaves of this herb appear like grass.

Tarragon, highly aromatic and flavorful, is a key ingredient in several French recipes. Importantly, it’s one of the ingredients included in ‘fines herbs, a famous French spice mixture for seasoning.

The presence of methyl chavicol (Estragole) in tarragon leaves gives it a pungent, bitter-sweet taste. Its taste is a lot similar to licorice, fennel, and anise because they all contain methyl chavicol compounds.

Most people love the licorice flavor of tarragon but some don’t. While making a substitution, choose the right alternatives according to your taste preferences.

Fresh tarragon has a well pronounced bittersweet and peppery taste than its dry version. Note, tarragon’s flavor will diminish in over-heat cooking, thus it’s best to add toward the end of cooking or garnish it on top of the dish.

Available in both fresh and dried form, this aromatic herb is a wonderful addition to several dishes, especially, pairs well with meats, seafood, and egg dishes.

Pairs well with baby vegetables like carrots, asparagus, fava beans, and artichokes. It gels well with other spicy ingredients like chervil, bay leaves, basil, parsley, garlic, fennel, and shallots. You can even use it along with sorrel, thyme, dill, cress, mint, and savory.

Tarragon is a conspicuous ingredient in Bearnaise sauce, for that there’s no substitute.

So, tarragon is truly a versatile herb that complements most other ingredients in a recipe; so its ideal substitutes must also have the same characteristics.

What Is A Good Substitute For Tarragon?

Tarragon is an important ingredient in several French-inspired dishes. If you don’t this herb while making some of the popular French dishes, then you have to look for other delicately-flavored substitutions for tarragon.

Using Fines herbes or herbes de Provence is a quick substitution for both fresh and dried tarragon in spicy dishes; both these herbs-mixture contain tarragon.

Some of the best alternative ingredients you can use in place of tarragon are:

Chervil, sometimes called French parsley, is a delicate annual herb related to parsley. It has a milder flavor and fragrance which resembles fresh tarragon and parsley with a note of anise. Because of its mild flavor, add a tablespoon of chervil for every teaspoon of fresh tarragon.

Fennel seeds have a flavor that mirrors tarragon, but a stronger counterpart of chervil. They add a delectable and intense flavor to your dishes, perhaps, twice stronger than tarragon. Thus, use only a pinch of fennel seeds to replace a tablespoon of fresh tarragon.

It’s a versatile alternative to tarragon for it can be used in a variety of dishes, both meat, and vegetables.

Basil leaves are a popular herbal ingredient in Italian and French cooking. In an emergency, it’s a good replacement for tarragon, also usable in several recipes. The flavor profile of basil leaves echoes the sweet and peppery notes of tarragon but milder like chervil.

The biggest advantage of using basil to substitute tarragon is its easy availability and compatibility in a wide range of dishes.

Angelica herb belongs to the parsley family of plants. It’s slightly bitter and herbal and is reminiscent of parsley. The mild fragrance of angelica does not have a close affinity to tarragon. Even so, this herb is versatile like tarragon and commonly used for flavoring candies, desserts, and liqueurs.

Angelica isn’t a perfect stand-in ingredient for fresh tarragon, still usable when you don’t have better substitutes at hand.

Do you want a substitute for dry tarragon? Here are the best alternatives to consider:

Aniseed has a sweet, aromatic taste that resembles the taste of black licorice, the same that you’ll find in dried tarragon as well.  The stronger flavor of aniseed calls for its minimal use. Just a pinch of this seed is enough to replace every teaspoon of dried tarragon.

Dried dill seeds taste slightly citrus and pungent with a strong aroma like tarragon and caraway. As a herb and spice, dill is a commonly used ingredient in Mediterranean cooking for its aromatic flavor.

Dill seeds are a good option to replace dried tarragon in meat and seafood delicacies.

Use a pinch of fennel seed for each teaspoon of dried tarragon called for in the recipe. Fennel seeds and French tarragon have a very distinct licorice flavor. Also, fennel seeds are easily available and go well with most dishes that call for tarragon.

It’s warm, slightly sharp, and a little bitter and citrusy flavor make it a decent alternative to tarragon in most dishes. Like dried tarragon, dried marjoram is a popular addition to salad dressings, meat dishes, delicate vegetables, tomato-based dishes, and poultry seasoning. The mild sweetness of marjoram makes it a good addition to soups, dressings, sauces, and stews as you would use tarragon.

The flavor of dried oregano is not nearly the same as tarragon, but the herby intrigue that it works in the same way as tarragon does in a recipe.

In a pinch, you might have an easy escape with dried oregano as a dried tarragon substitute.

The strong aromatic, warm, and slightly bitter taste of oregano is a cut about tarragon, so use it in lesser quantity while substituting.

Is It Possible To Swap Dried For Fresh?

If you require tarragon throughout the year, think of freezing and preserving fresh tarragon for future uses. The flavor and aroma of the frozen tarragon remain intact for a couple of months indeed.

None of the herbs or spices can be a perfect replacement for tarragon because of its unique aroma and flavor. In a pinch, you may use chervil, fennel seeds, or basil for fresh tarragon. Common dried tarragon substitutes are aniseed, dried dill, oregano, or marjoram. In some of the dishes, you may altogether leave out tarragon if strictly not required.