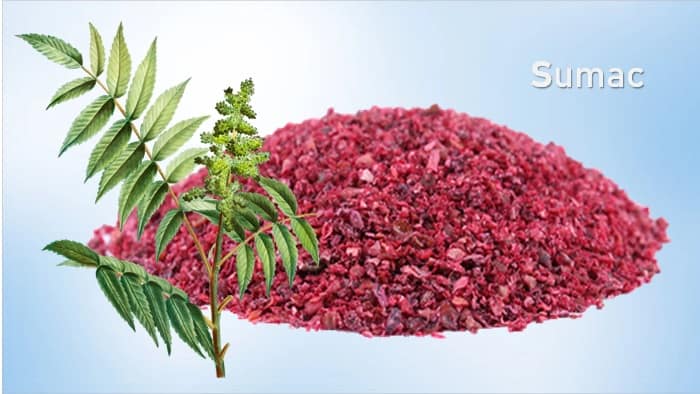 I’m sure that you’ll love to enjoy hummus that tastes extra delicious with sumac sprinkled over it. Believe me, sumac is the secret behind the yummy taste of fattoush, kebabs, or salads that you get in Middle Eastern restaurants.

What to do if you don’t have sumac while you are preparing a dish that requires it? This article reveals the best substitute for sumac to use in an emergency.

TABLE OF CONTENTS
What is Sumac?
What does sumac taste like?
Culinary Uses
Best Substitute For Sumac

Sumac is made from the dried and ground berries of the wild sumac flower, in the genus Rhus shrub, and related genera in the family Anacardiaceae. This shrub is mostly grown in high mountain plateau areas of the Mediterranean, Africa, and West Asia. There are over 150 varieties of sumac plants but the two most common forms of cooking sumac are Lemon and Scarlet sumac.

Fully ripe sumac berries are harvested, dried, and ground. The ready-to-use sumac takes on a dark red-burgundy color and texture of groundnuts.

Many love to steep fresh fruits to make tea, but the dried and ground sumac is popularly used as an herbal supplement or culinary seasoning.

Sumac is high in vitamin C, antioxidants, and other compounds beneficial for health.

If you want to buy sumac, look for it in a Middle Eastern spice aisle of a supermarket or from online vendors.

Sumac tastes like a lemon that exhibits tartness and mild acidity. This tangy spice also has a pleasant milder fruity profile.

The appearance and taste profile of the sumac can be described as:

Sumac is a souring agent that can very well be used as a substitute for vinegar or lemon. It’s popularly used in salad dressing, marinades, garnishing, to brighten up the dry rubs, and dusted over a variety of foods like bread, desserts, lamb, fish, chicken, and more. This tangy spice adds a zesty flavor to dishes like hummus, fattoush salad, and several other Arabic and Turkish cuisines.

Note, before you use sumac, be sure to examine the ingredient label as some manufacturers include salt, if then, lessen the amount of salt needed in your recipe.

If you’ve run out of sumac or it’s unavailable in your locality, you can use one of the substitutes that I have listed below. Choose the right replacement ingredient that complements other ingredients in your recipe.

Traditionally, sumac was the main food souring agent used in Middle East kitchens before lemon was introduced to them by Romans. And then comes lemon pepper seasoning to the scene.

When using lemon pepper to replace sumac, use it in one and a half the amount of sumac needed for your recipe.

Za’atar, a widely used seasoning mixture in the Middle East, contains sumac as a prominent ingredient that defines its overall taste. Besides sumac, other essential ingredients in an authentic za’atar include salt, sesame seeds, oregano, thyme, and/or marjoram. In fact, all the ingredients in za’atar go well with most dishes that call for sumac.

Importantly, there are several blends of za’atar available with an addition of two or more ingredients added to the authentic za’atar. As far as possible, use the traditional za’atar as a substitute for sumac.

Use za’atar in a 1:1 measure to replace sumac.

Tamarind is an edible sour fruit got from the tamarind tree, a leguminous plant indigenous to tropical Africa and India. This fruit, known for its extreme tartness, is widely used in Indian and Thai cooking.

Most supermarkets stock tamarind for sale as whole dried pods, tamarind paste, or frozen tamarind pulp. Due to the extreme tartness of tamarind, you just require a teaspoon of paste to replicate the tartness of sumac needed for your recipe.

When using it as an alternative to sumac, keep adding it in a small amount to your dish until you reach the desired flavor.

Vinegar is another manageable alternative to sumac. Often, these two are also used interchangeably in any of the dishes that require them.

Vinegar has a slightly higher level of a tartness than sumac, so add it in a small amount to your dish.

Note, there are different types of vinegar with a significant difference in flavor and color. Among all the vinegars, distilled white vinegar is the most appropriate substitution for sumac.

The humble lemon juice is a worthy replacement for sumac for they both have identical lemony flavor and tartness.

Like sumac, few drops of lemon juice can be sprinkled over grilled meat, fish, and vegetable to add tart flavor. Its acidity cuts greasiness and heaviness and gives the dish a fresh, appetizing clean taste. This citrusy juice also makes the grilled meat and fish soft and bright.

Always add lemon juice to your dishes toward the end of cooking; add little by little and adjust to taste.

If you are missing lemon zest then here are the substitutes to use.

What is a good alternative to lemon verbena?