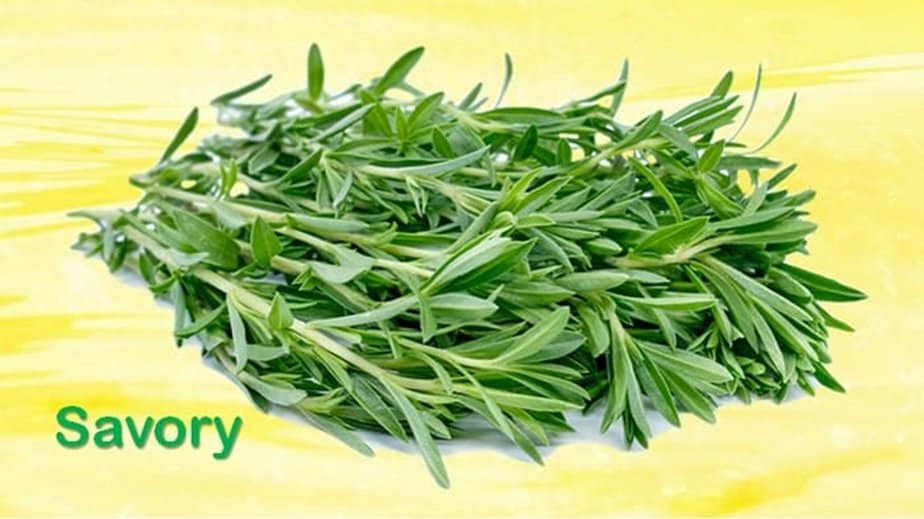 For centuries, people have been using the savory herb as a culinary herb in preparing several types of dishes. Most of us love to relish the robust, peppery flavors of both summer and winter savories.

Don’t be confused. The term “savory” in general refers to any flavorful food, as in “a savory dish” or “a savory soup.” Here we are dealing with savory plants and herbs.

This article explores the types, culinary uses, flavors of savory spice, and the best substitutes for savory.

TABLE OF CONTENTS
What Is Savory?
How Is Savory Used In Cooking?
Summer Savory Vs. Winter Savory
Best Savory Substitutes
FAQs

Savory, which belongs to the mint family, is a small green herb that is used as a flavoring spice in cooking. You can find two varieties of savory ingredients used in cooking: summer savory and winter savory. Both of these varieties are native to the Mediterranean region.

For the ancient Romans, this aromatic herb was a natural aphrodisiac substance used for making love potions. Because of its peppery flavor, the Romans used it as a pepper before the first lot of true pepper was imported from India, the land of spices.

The wonderfully pleasant aroma of savory is loved by all. So much so, it’s a staple ingredient in several recipes throughout the Mediterranean region.

How do savory taste and smell? Summer savory has a uniquely hot, peppery flavor; on the other hand, winter savory has a subdued, earthier flavor. Both have a complex mixture of flavors with notes of thyme, marjoram, and mint.

How Is Savory Used In Cooking?

Either fried or fresh savory leaves are used according to the type of dish. Usually, it’s added to the dish at the end of the cooking.

Winter savory is also an excellent ingredient for seasoning all types of meat dishes. It adds a deep, peppery-pine flavor to meat, and you can drizzle it over it before roasting or grilling. also used to preserve and flavor salami.

Savory is the main ingredient in the French blend of dried herbs known as “Herbes de Provence,” a flavorful herb mixture. This mixture is used in dishes like grilled meats, stuffing, soups, sauces, and stews.

Use winter savory in sausages, lamb, pork, game, and other long-cooking meat dishes, and in fish such as eel and mackerel.

The Romans used savory as a salt substitute, and these days some continue to use it for the same.

What is the difference between winter savory and summer savory?

Basically, both have the same flavors, with some flavor elements of thyme, marjoram, and mint.

Summer savory (satureja hortensis) has a lighter flavor and is the type most commonly used, especially in various seasoning blends like Herbs de Provence. It’s a sweet and spicy-smelling herb with small, light green leaves. Summer savory is mostly found in Acadia, the Atlantic coast of Canada also cultivated in S.E. Europe to W. Asia; popularly used for seasoning meat and bean dishes

Winter savory (satureja montana) is a hardy winter plant with hints of pine and sage. This herbal spice is native to the rocky outcrops of the Mediterranean and North Africa. This is slightly stronger and bitterer than summer savory.

Fresh savory leaves are not easily available in many regions outside the Mediterranean. If you’re working on a recipe that requires summer or winter savory, consider any one of the savory alternatives that I’ve listed below. Choose the right savory spice substitute items according to the flavor profile of your recipe.

A herb that is most closely related to savory in taste is none other than thyme. This aromatic herb has a somewhat minty and pungent flavor.

To make things comfortable for you, it is easily available in most places, or you may already have it in your kitchen garden.

Both of these herbs have a very similar appearance and texture. In fact, if finely chopped savory and thyme leaves are placed side by side, it is difficult to distinguish between the two.

Like savory, it can also stand up to a long cooking time without losing its flavor.

It works as a good substitute for summer savory and winter savory as well. Use fresh or dried thyme to swap out savory in the same measure.

Also, see if any of the thyme substitutes can be used in your recipe.

This herb has a flavor similar to savory, though they differ in appearance. Sage has larger and wider leaves than savory and thyme, but pungent pine notes in flavor are common to all three herbs.

Usually, the fresh leaves of sage provide the best flavor, therefore, use fresh sage when substituting savory. Notably, fresh green sage is better for recreating a taste close to savory in your dishes.

If it isn’t available, one of the substitutes for sage may work in your recipe.

In third place, marjoram deserved to be used as a replacement for savory. This fragile herb is an aromatic herb in the mint family that is native to the Mediterranean and North Africa.

You can sense a mixed flavor of thyme and oregano in this herb. A subtle flavor of basil tinged with pine notes is evident in the marjoram. Obviously, you can feel most of the flavor features of savory enshrined in marjoram.

Note, marjoram is a fragile herb that cannot withstand long cooking times, unlike savory. Add it to your recipe midway through cooking.

As a substitute, use marjoram in the same quantity as the savory required in your dishes.

If you’ve run out of it, try a marjoram substitute to complete your recipe.

Each herb and spice has a unique flavor and aroma. Chefs say that using a blend of two or more herbs is necessary to imitate the flavor of a single herb.

Certainly, a mixture of suitable herbs can better imitate the flavor of savory than using a single herb.

In place of savory, try using two parts thyme to one part sage and a pinch of mint. This mixture has a flavor and aroma that are very close to savory.

Trial-and-error methods need to be practiced to achieve the best proportion of herb mixture to use in place of savory.

Savory is a herb. commonly used in Mediterranean cooking. Both winter and summer savory add a hot, peppery flavor to your dishes. Even if you don’t have savory in your spice rack, you can still follow a recipe that calls for savory, if you have thyme, marjoram, or sage in your kitchen cabinet. Thyme is our best pick as the most suitable summer savory substitute. 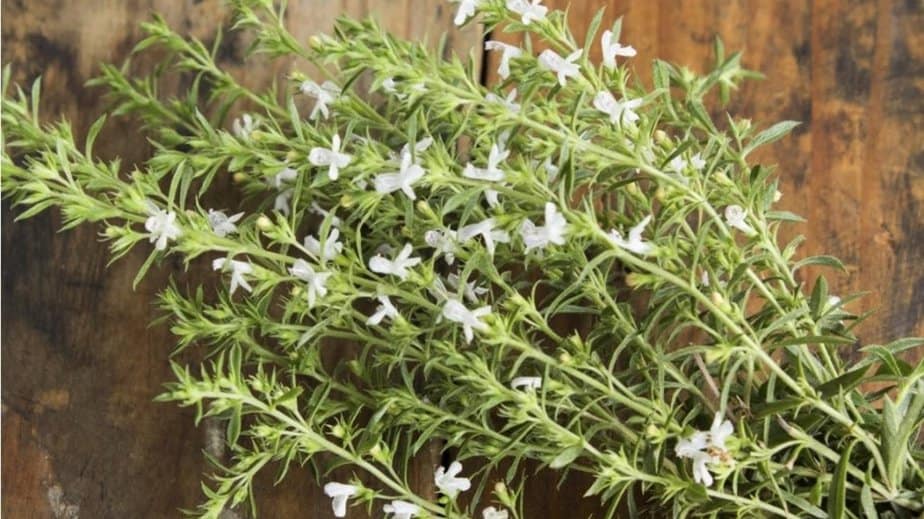 No. Savory leaves produce a bit of a hot, spicy flavor on the tongue. It may taste like a combination of oregano and thyme. Oregano on its own is strongly aromatic and has a slightly bitter, pungent flavor.

What qualifies as savory?

The term “savory” refers to a leafy vegetable or to a flavor that is delicious and tasty. In world cuisine, savory food refers to a taste that is the opposite of sweet. It can refer to a cooked dish having a spicy or salty quality without sweetness.

Flavor-wise, savory and rosemary are a lot alike. They can be used interchangeably in some dishes. It’s actually the winter savory that has a deeper and more piney taste similar to rosemary. They are often paired with heartier foods like red meat, pates, game, or sausage.

What is a savory seasoning made of?

Usually, the savory seasoning refers to “Herbes de Provence,” the famous French blend of dried herbs. It consists of plants native to the Provence in the southeast region of France. Its chief ingredient is savory, alongside rosemary, marjoram, oregano, and thyme.