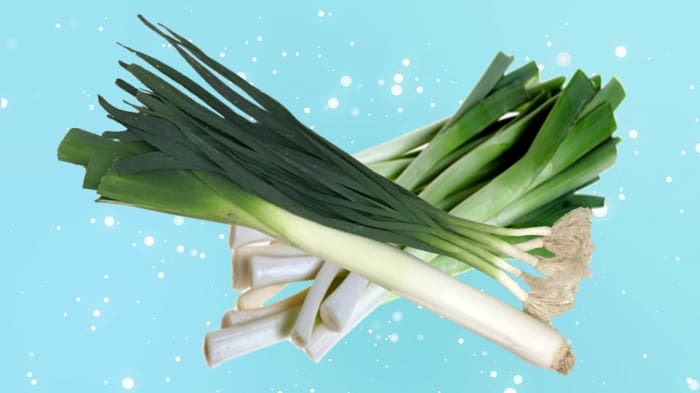 Have you ever made potato leek soup? Are you someone who often uses leeks in your recipes? I think you did. It’s wonderfully delicious to have leeks in pasta, risotto, or stuffings. Even eating them independently also taste good.

What to do if you don’t have leeks needed for your recipe? What to use in place of them in your cooking?

This article reveals the best leeks substitute you can use, also a little about its uses and flavor profile.

TABLE OF CONTENTS
What Are Leeks?
What Is A Good Substitute For Leeks?

Leeks, native to the eastern Mediterranean and the Middle East, are alliums. They’re a member of the onion family that includes chives, garlic, scallion, onions, shallots, and Chinese onion. Leeks look like scallions (or green onions), but they are larger in size. Ramp is the wild counterpart of leek.

The edible part of this plant is a bundle of leaf sheaths which are erroneously called a stem or stalk. This bulbous vegetable has white flesh and leafy green tops.

This leafy vegetable is one of the most expensive varieties of onion, especially in regions where they are rarely used or not cultivated. If they aren’t available in your locality, then use one of the other alliums as a substitution for leeks.

Are leeks green onions? No. Leeks are not green onions (scallions) but they both belong to the family of onion plants. Leeks appear like overgrown scallions but have a milder and more delicate flavor. They have a bulbous white fleshy base and green towards the top. Whereas a scallion has a white base that is not bulbous but has long green stalks that resemble chives.

Leeks add a unique, sweet, and mild onion flavor to your dish. They are incredibly versatile and work well in adding depth to pasta, stews, soups, and more.

In comparison to garlic and onion, they’re milder and more subtle in flavor and fragrance. They can be simply described as sweet onions. Tender leeks are mostly preferred in raw preparation because they are more delicate in flavor and texture.

How Are Leeks Used In Cooking?

Leeks are exceptionally versatile and milder than most other alliums, suitable for eating raw, boiled, braised, or roasted. Almost everyone would enjoy grilled or roasted leeks as a delicious side dish. They can also be conveniently incorporated into soups, stews, pasta, and other cooked dishes.

Many love to eat raw leeks, especially the whitest portion of the bulb which is a nice addition to salads. Just as you cook onions, they can be sautéed in butter or olive oil or even caramelized.

Never overcook leeks or else they become mushy, even a little slimy. For this reason, when adding them to a dish, add leeks near the end of cooking.

What Should You Look For In A Leek Substitute?

Looking for a leek substitute? As leeks belong to the allium family of plants, using another vegetable from the same genus of plants in place of leeks is the best option to consider.

Leeks have a mild flavor and voluminous fleshy texture. Thus a leafy vegetable with fleshy stems and mild onion flavor could be their best replacement.

If you are using leeks as one among the many ingredients in your recipe, anything with onion flavor is a good sub in for leeks. Whereas, if leeks are constituting the majority portion of a dish, you have to use a sub that replicates all features of leeks.

What Is A Good Substitute For Leeks?

Finding substitutions for leeks becomes necessary when you have run out of leeks, for allergic issues, or their unavailability in your locality. Any vegetable that has a mildly sweet, onion taste is the perfect replacement for leeks. Fortunately, there several varieties of veggies in the onion family that can easily be used in place of them. You may consider one of the following leek substitutes in your recipe:

Scallions, also known as green onions or spring onions, are the closest substitute for leeks as both of them have a similar flavor profile and appearance. Most importantly, scallions can be used in most recipes that call for leeks such as salads, stews, sauce, Spaghettini, and more.

Note, there are a few different varieties of scallions and some of them have a stronger flavor than leeks. The scallions with rounded white bases have the best proximity to leeks.

Shallots are a member of the allium family closely related to leeks and other varieties of onions taste-wise. They are small onion bulbs that can be used as a replacement for sautéed leeks.

Shallots won’t give your dishes the appearance and texture of leeks but they do have a sweet onion flavor. Also, they are spicy, acidic, and sharp which you won’t find in leeks.  On the whole, shallots have a richer flavor than leeks, suitable for seasoning your dishes.

Garlic is a species in the onion genus allium that has a similar taste and aroma to leeks. But the small white bulb-like garlic cloves entirely differ from leeks in appearance and texture.

Being stronger and more pungent, a small amount of minced or crushed garlic in place of leeks renders a similar aroma and flavor to many dishes.

In short, garlic is a workable substitute for leeks for the sake of flavor but not for garnishing or adding greenish fleshy volume to a dish.

The onion, also known as the bulb onion or common onion, is a species of the genus Allium; one of the most commonly cultivated and used vegetables in the world. Onion and leeks have closely similar tastes but they differ in appearance.

Red, white, and yellow onions are the most common varieties and they have a stronger flavor than leeks. Use onions to substitute leeks in less quantity in terms of weight.

There are several genetically modified varieties of onions with differences in taste and size. Also, their flavor can vary according to season and the types of soil in which they grow.

Ramps, also known as wild leeks, are a species of wild onion native to the woodlands of North America. In many areas, they are a much-awaited spring delicacy associated with seasonal festival foods.

The flavor and aroma of ramps have a resemblance to the complex mixture of garlic and onion.

Use ramps raw or cooked in any recipes that call for leeks or scallions. The bulbs, stems, and leaves of ramps are edible. They work great in soups, salads, casseroles, as well as potato, rice, or egg dishes.

In a pinch, ramps can be used as a leeks substitution in any recipes that need them.

When you are using leeks in a dish for the sake of their onion flavor, the same can be achieved by using onion powder instead. Onion powder is not the best substitute for leeks but a manageable replacement when you have exhausted other better options.

Note that onion powder can provide the onion taste but not the texture and appearance of leeks. Thus, this substitute ingredient is best for flavoring dishes like soups, stews, and other dishes.

To sub in onion powder, for one cup of raw chopped leeks use one teaspoon of onion powder as a substitute.

What to do when I don’t have chives?

What is the best alternative to lemongrass?

What can I use in place of epazote?

What is the best substitute for chervil?