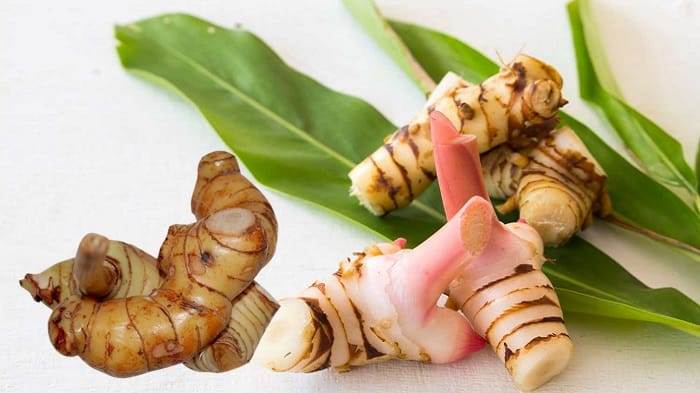 Many Thai cuisines would go incomplete without galangal. Also, it’s an important ingredient in Thai curry paste, a flavorful base for several Thai dishes.

Galangal tea is a well-known herbal drink for boosting immunity and fighting inflammation. It is simply refreshing and tasty to enjoy the mushroom curry or chicken curry with galangal.

Unfortunately, this root herb is not easily available outside Southeast Asia. What to do when you don’t have galangal for your recipe? What to use in place of galangal in your dishes?

This article reveals the best substitute for galangal in a pinch, also a briefing on the flavor profile and uses of this root herb.

TABLE OF CONTENTS
What is galangal?
What is a good substitute for galangal?

Galangal is a common name for several types of tropical rhizomatous spices. This root spice (Rhizome), also known as Thai ginger or blue ginger, belongs to the family of ginger and appears like a knobbly Jerusalem artichoke. It is paler and more woody than ginger with ivory-colored flesh.

‘Alpinia galanga’ is the best variety of galangal commonly used in Asian cuisines.

This cultivable spice is mostly found in Southeast Asian countries. You get to buy galangal as fresh root, dried root, or powder.

This tropical rhizomatous spice is widely used in Asian cuisines, particularly in Thai cookery. It’s a common pantry staple that you can find almost in every Thai home.

If you can’t get it in your locality, then go with a good galangal substitute for your dish.

Galangal tastes zingy, herby, and warm, something similar to ginger. On the whole, this root spice renders a peppery and citrusy note to dishes. Besides, it resembles a lot of cardamom with a bitter pine background. The aroma of galangal is piney with a citrusy punch.

How to use galangal in cooking?

Galangal is a common ingredient in several Southeast Asian dishes, especially in Thai curries, soups, and stews. It adds a robust and sharp flavor to dishes with a mild sweet note.

Like ginger, use grated fresh roots, dry powder, or paste of galangal in your dishes.

Like ginger, the raw roots of galangal are occasionally used in Western-style recipes. Thai chicken curry recipes usually have it as a prominent ingredient with other greens. Other famous Thai special delicacies like tom yum soup and tom kha gai soup will be incomplete without galangal roots. Similarly, Vietnamese stews, Indonesian coconut dishes, and Thai soups heavily rely on Thai ginger for their unique flavor.

What is a good substitute for galangal?

Galangal flavor is crucial to several dishes from Thailand, Vietnam, Indonesia, and others. Fresh galangal is needed in most dishes, some require dry powder. In the absence of Thai ginger work your way around an alternative option. In a pinch, use one of the following substitutes for galangal:

The first and best galangal substitute is ginger for they both belong to the Zingiberaceae family of plants with a similar appearance. They are slightly different in flavor still a lot similar to be used interchangeably.

In addition, both these roots have similar chemical properties in varying degrees but render the same health benefits.

To your advantage, ginger is easily available even at an average grocery store.

Ginger is more flavorful than galangal thus use it in less quantity while substituting. Preferably, use dry ginger to substitute dry galangal, and instead of fresh galangal use fresh ginger.

Fingerroot is a kind of ginger (Zingiberaceae) indigenous to southern Yunnan Province, China, also cultivated in some regions of Southeast Asia. The long and carrot-shaped rhizome with brownish color looks very different from galangal.

Fingerroot is similar to lesser galangal in flavor, especially for the pungent flavor that they both have. Like the lesser galangal, it is most often used for medicinal purposes than cooking.

In some of the Thai and Cambodian dishes, fingerroot is used either in place of or along with galangal and ginger.

Fingerroot has a more intense flavor than galangal, thus use it in less quantity while replacing galangal with fingerroot. Approximately, use fingerroot in ½ of the amount of galangal required in your recipe and if necessary add more at the latter part of cooking.

A combination of cinnamon and mace produces a flavor somewhat similar to galangal. Strangely, both these ingredients are in no way related to rhizomatous spices.

Cinnamon and mace replicate the peppery warmth and sweetness of galangal in your dish. The subtle spiciness of mace is also giving a citrusy punch like ginger.

Lemongrass, kaffir lime leaves, and galangal are known as the trinity of Thai cooking as they are often used together or interchangeably.

Lemongrass would definitely work well as a substitute for galangal in soups, herbal tea, and sauces. The citrusy lemon flavor lemongrass is a pleasant and enjoyable taste.

Ginger and galangal are closely related and similar in flavor. However, galangal is peppery and sharper than ginger. Using a pinch of cinnamon along with ginger can mimic the sharp peppery flavor of galangal.

The combination of ginger and cinnamon is more flavorful than galangal thus use them in lesser amounts.

Use black or white pepper as a substitute for galangal for after all they both provide the same warm and peppery flavor. To make things easy for you, black pepper is easily available in most grocery stores across the world. Pepper works great in savory dishes and hot soups.

What spice is similar to turmeric?

How can I manage my recipe without powdered mustard?

What to use in place of lemon pepper?

Looking for a mace substitute?