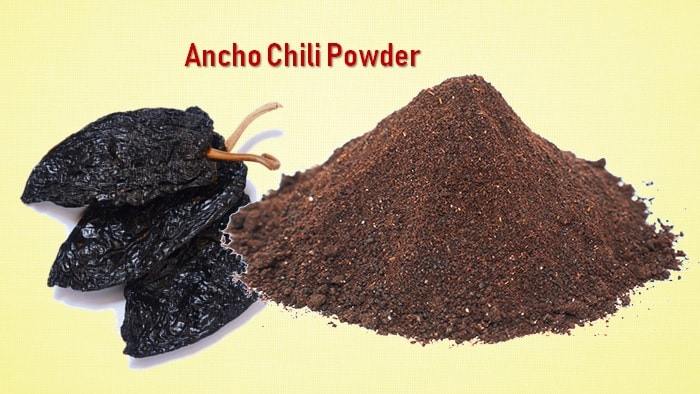 Ancho chili powder is a staple in several Mexican cuisines. This hot chili is part of the “holy trinity” (Ancho, Pasilla, and Guajillo) widely used in mole sauces. When you are trying out a spicy Mexican recipe like the mole sauce or salsa, ancho pepper is a conspicuous ingredient.

This article explores the best substitute for ancho chili powder, and also a little about its flavor profile and uses in cooking.

What Is Ancho Chili Powder?

The poblano (Capsicum annuum) is a mild chili pepper originating in the state of Puebla, Mexico. Ancho chili powder is derived from dried and ground poblano chilies harvested early.

It is slightly spicier than regular chili powder which is a mixture of chilies and other spices. Ancho chiles are red poblano peppers that have been dried and ground and it contains 100% ancho peppers. This is a staple in several Mexican and American spicy recipes.

Only the red poblano pepper (before they turn brown and dry) is used for making this chili powder. Also, the stems and seeds are removed from the pepper before it is dehydrated and ground.

This powder has moderate heat. The sweet and earthy flavor of ancho pepper adds a wonderful fruitiness to your dishes.

The spiciness of ancho chilies varies, but it generally has a mild to medium heat. The heat level of ancho chili usually does not go beyond 2,000 Scoville Heat Units (SHU).

Ancho powder is one of the most favored spices in Mexican kitchens. Find it in popular dishes like enchilada sauce to the mole.

Many love to sprinkle it on pasta, pizza, soups, stews, baked potatoes, vegetables, and more. It’s a core ingredient in seasoned chicken dishes in Mexico.

A light smoky and delicious fruity flavor makes it apt for marinades as part of chili paste or adobo.

Ancho chili powder is easy to source or make powder yourself, especially if you are living in a Mexican locality.

If you cannot find it in grocery stores near you, the best alternative to ancho powder is to make it yourself at home. Get well-dehydrated fresh poblano peppers and grind them.

In case, you don’t even have the poblano peppers, then save your recipe with a good substitute for ancho pepper powder. I’m sure that you might have at least one of these stand-in ingredients in your kitchen cabinet.

The mild heat of this chili that usually does not go beyond 5,000 SHUs is in line with ancho pepper.

Guajillo pepper is slightly sweeter than ancho pepper but perfect enough for tomato dishes, sauces, soups, and marinades.  It has also a similar smokiness to the ancho.

In place of ancho powder, you can easily use Guajillo chili powder or paste. It works perfectly in sauces and salsa.

The brownish pasilla chile or chile negro is the dried form of the chilaca chili pepper, a long and narrow member of the species Capsicum annuum. It is also part of the ‘holy trinity’ chili pepper mixture.

Pasilla chile is a worthy substitute for ancho chili powder as they both have similar heat levels and flavors. Chile negro is sweet like ancho but has notes of berry cocoa.

Use it in the same quantity as ancho powder required for the recipe.

Chipotle are smoked dried jalapeños that also come from Mexico, the land of chili peppers. The earthiness of this powder is far superior to ancho.

As for a major difference, it is at least 4 times hotter than the ancho chili powder. Still, it’s a good choice for replacing ancho powder. By using chipotle in less quantity than ancho powder required for your recipe, you can balance the heat level.

In the groceries, you’ll find two types of chipotle: Meco and Morita. Meco chipotles have a more intense smoky flavor than Morita. While using chipotle instead of ancho powder, make sure that the smokiness of this chili won’t overpower the flavor profile of your recipe.

If you prefer to have a less spicy alternative to ancho chilies, then go for New Mexico chili powder. It’s a lot similar to ancho pepper despite its low spiciness.

Most brands of New Mexico chili powder are made with Anaheim chilies, but some brands do use Californian chilies.

Don’t expect to find the earthiness of ancho chilies in it; still, it works as a replacement for ancho powder in a pinch. While using it as a stand-in chili for ancho chili powder, use it in a little more quantity to catch up with the spiciness of the ancho.

The Mulato has a sweet chocolatey flavor that is a departure from ancho peppers. Also, the dark brown color of Mulato may not be appealing in pale dishes.

Sweet and mild, this chile pepper is commonly used in Mexican and Southwestern U.S. cuisine. If you are looking for a substitute for ancho chili powder then use Guajillo or Pasilla pepper powder. Other useful ancho powder alternatives are chipotle powder, Mulato pepper powder, or new Mexican chili powder.

Looking for a Szechuan pepper substitute?

Don’t miss out on these substitutes for white pepper.

What is a good substitute for Guajillo chili?

What is the best replacement for Chile De Arbol?