Finding a proper sherry vinegar substitute is not easy. Honestly, there are no other vinegar or ingredients that perfectly mimic its complex flavor.

However, when your recipe demands sherry vinegar and you don’t have it; you could be looking for an agreeable replacement for it.

In this article, you’ll read about a few worthy alternatives to it just enough to save your recipe.

Sherry vinegar is less common than others and is valued for its exotic profile and delicious caramel notes.

If you are in a pinch or can’t find it in your nearby grocery stores here are some of the here are excellent replacements worth considering:

Rice wine vinegar, made from fermented rice, has a similar acidity level and flavor profile. One is made from grape wine but the other is made from rice wine. Overall, it’s the best sherry vinegar substitute you can lay your hand on.

It is popularly used in East Asian cooking like sushi rice, sauces, and meat dishes.

In terms of cost, this one is much cheaper.

Use rice wine vinegar in place of sherry vinegar for sauces, marinades, and vinaigrettes. It can also add a pop of flavor to your main course or use to pickle vegetables.

Use it in a 1:1 ratio in any recipe that calls for the former. If this isn’t available to you, even an ingredient equivalent to rice vinegar can be used.

ACV is made by fermenting the sugar from apples. It has a moderately complex flavor with the fruity taste of apples.

Unlike SV, the ACV is easily available and much cheaper as well.

The downside of using ACV instead of sherry vinegar is the level of acidity.

The fruity flavor of ACV may not rightly fit into all recipes that call for SV but works for some.

If you happen to have sherry wine in the kitchen, just a splash with the cider vinegar to take care of the missing flavor; especially, when SV is called for in the recipe.

While using apple cider vinegar in place of SV, use it in slightly less quantity to balance the level of acidity.

In an emergency, a suitable apple cider vinegar substitute can be used in your recipes.

In comparison to the SV, champagne vinegar is slightly sweeter and milder.

Using too much it can make your dish noticeably sweet. Tweak some things along the way depending on the dish. Overall, it’s a pretty similar replacement.

For example, you can reduce its sweetness by blending it with white wine vinegar.

CV works as a substitute for sherry vinegar in making light sauces, pasta salads, and vinaigrettes. Unfortunately, it isn’t available everywhere, in such a scenario, even a champagne vinegar substitute can possibly be used.

Another agreeable substitute to use is white wine vinegar. Both are grape wine-based and share a similar grape flavor.

It has a slightly higher level of acidic flavor. So use it in less quantity while replacing.

To your benefit, both of them are used in some types of dishes.

You can easily use this substitution in salad dressing, European soups, stews, and marinades like recipes that call for sherry.

Mixing it with sherry wine also gives an excellent swap for sherry vinegar. If it isn’t feasible, choose a substitute option for white wine vinegar. For every tablespoon of it add half a teaspoon of sherry wine while preparing this mixture.

It is made from, yup, red wine. Besides the acetic acid flavor, it has a more vibrant grape flavor.

Of all the wine vinegar, this one seems to be punchier, hot, and robust.

Most of us love it for its complex and bold taste. Anyways, it is much stronger than sherry vinegar.

When you use it as a swap for sherry vinegar, always start by using less.

This alternative works best in something hearty like roasted vegetables or meat. Just drizzle it over pasta, green, or vinegary French potato salads that call for sherry vinegar. If it isn’t available, another ingredient similar to red wine vinegar can still save your recipe.

Citrus juice like lemon or lime is the best natural replacement for any type of vinegar.

Vinegar contains acetic acid but lemon extract contains citric acid. So it is obvious that the flavor of lemon juice is quite different from vinegar.

But when you don’t have sherry vinegar, one or two teaspoons of lemon juice can provide the appealing flavor of vinegar to your dishes. Instead of lime juice, even lime zest may work for some recipes.

Sherry is a fortified type of wine made from white grapes that are grown in Andalusia, Spain.

Sherry wine on its own can work as an alternative to sherry vinegar in some dishes. This can provide the fruity flavor of sherry to your dishes.

Most chefs prefer to use a blend of sherry and red or white wine vinegar in a 1:1 ratio instead of using sherry wine alone.

Importantly, the flavor of sherry can vary according to the type of sherry used. Preferably, use dry sherry for replacing sherry wine vinegar.

As a word of caution, cooking with any alcoholic beverage like sherry adds alcoholic content to your dish. Thus it is not a perfect exchange option for people who strictly avoid alcohol. 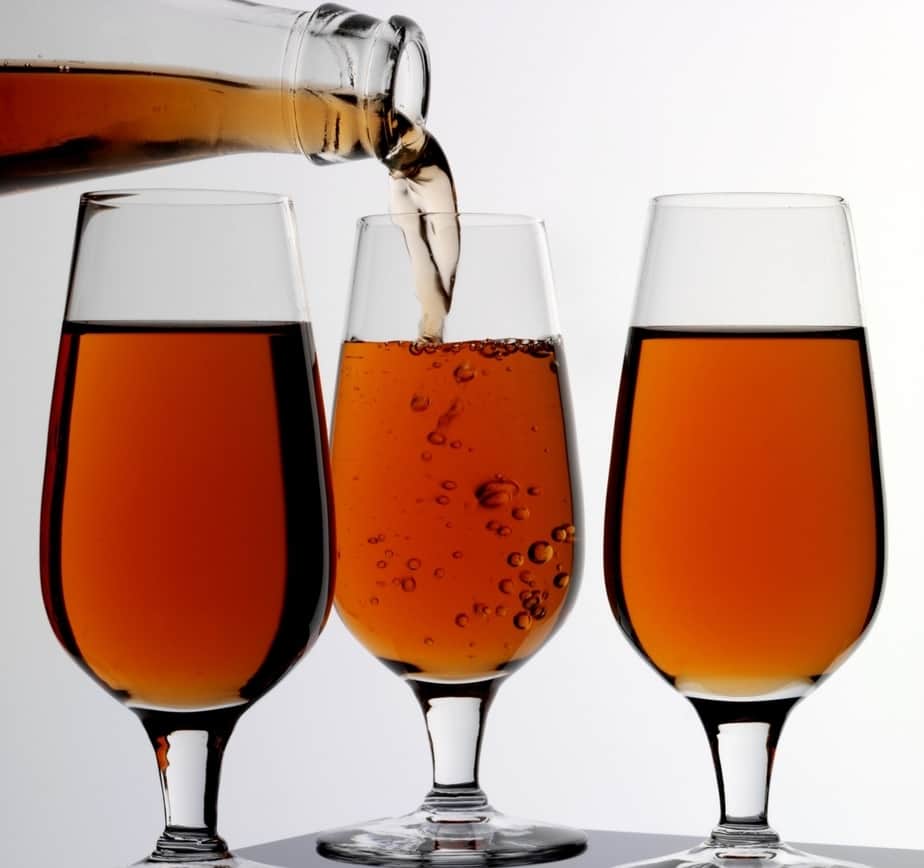 Can I use white vinegar instead of sherry vinegar?

White vinegar is a neutral swap for any kind of vinegar including sherry. However, white vinegar is more acidic and harsh. But the SV has a roundness of flavor with a rich nutty taste but you’ll not find that pleasant flavor in white vinegar.

Can you use balsamic vinegar instead of sherry vinegar?

The sweet and tangy balsamic vinegar isn’t an ideal replacement for sherry vinegar yet it’ll work. To your advantage, it is cheaper and easily available in most groceries. SV is less sweet than balsamic. Both of them have almost equal levels of acidic qualities thus use the same amount of balsamic vinegar as the former in your cooking.

Is red wine vinegar the same as sherry vinegar?

Both are made from fermented wine but they are not the same.

Red wine vinegar is made by fermenting red wine and is mostly tangy with little sweetness. Sherry vinegar, made from fermenting sherry wine, is exclusively made in Spain and is produced from brewed sherry wine. It’s a superior item with a rich nutty sweet flavor. They can be used interchangeably despite their differences in flavor.

Can I substitute mirin for sherry vinegar?

Mirin alone would not be a good ingredient to substitute sherry vinegar. However, a combination of mirin and dry sherry in equal amounts will be a lot similar to the actual sherry vinegar. You can also add a little white sugar to this mixture to bring in the sweetness of SV.

Is sherry vinegar the same as dry sherry?

Sherry vinegar is made from sherry wine, and it has a wonderful taste. However, dry sherry has a wine taste and it’s neither acidic nor has the qualities of genuine vinegar. If you have run short of SV, then think of using another type of vinegar instead of it.

The substitute for sherry vinegar is rice vinegar which has the closest flavor and acidity strength to SV. ACV and red or white grape wine vinegar will work as a suitable replacement for SV

If you have sherry wine on hand, simply drizzle it with any other vinegar to take care of the sherry flavor.

The ultimate choice for you is none other than the humble lemon juice which is a universal replacement for any vinegar.

For further reading, also see all the important facts about vinegar and the complete list of substitutes for different varieties of vinegar here on Authority Health Mag.