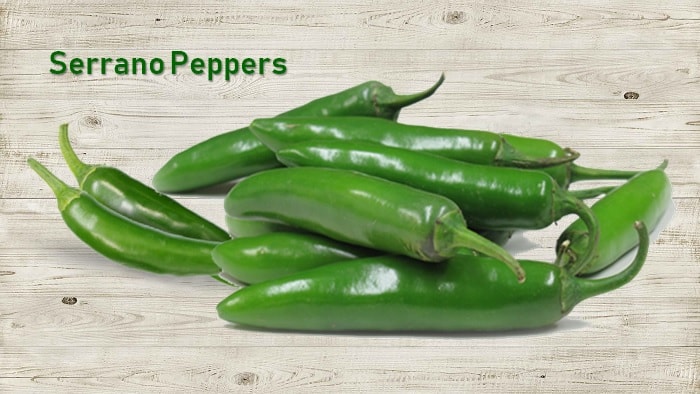 The delicious spicy kick of roasted serrano chili pepper is something that I’m personally fond of. I’m sure that everyone would love to relish salsas with serrano pepper.

Unless you live in Mexico, it may not be that easy to find this spicy chili. Don’t worry if you’ve run out of it or it’s not available to you. This article brings to you the best serrano pepper substitutes that you can use.

Today, the majority of green serrano chiles production comes from Mexico, and it’s hard to find in other parts of the world. So, if you are preparing salsa, chili pickle, or other hot sauces, what’s a good serrano pepper substitute? Here we have got a few good alternatives: other types of peppers that match its flavor, especially those in the same range of spiciness.

Can you use jalapeno instead of serrano peppers?

It’s a wonderful choice, undoubtedly, a great substitute for serrano. The bright and grassy taste of jalapenos is a perfect match for this Mexican pepper, but they have a much lower level of heat.

Jalapeno peppers are medium-hot peppers that rank 2,500 to 8,000 Scoville heat units, which is about 9 times lower than serrano. If heat is important to you, then you certainly need to use more quantity of jalapenos to catch up with Serrano.

To make things even easier for you, they are commonly available in most places.

In summary, you can always substitute a serrano pepper for a jalapeno, and vice versa, but keep their heat differences in mind. In case you don’t have them, the great substitutes for Jalapenos are Fresno and Anaheim.

Can you use cayenne peppers instead of serrano? Yes, but with a catch.

Cayenne peppers don’t have the bright flavor of serrano, but they are neutral enough to keep your recipe’s authentic flavor intact. I love to use them in guacamole and salsas.

Cayenne chilies are upper medium heat chilies – 30,000 to 50,000 SHU, which is about 5 times spicier than serrano. It’s way more up for those with sensitive palates. Still, you can opt for cayenne to replace serrano, but consider reducing the amount of chili used in the recipe.

Cayenne is typically harvested and sold in its mature red color, but it is the green color for serranos. Keep this in mind if color is going to make a serious difference in your dishes. Despite the differences in heat, substitutes for cayenne pepper such as Paprika, Jalapeños, or Red Chili Flakes are also usable.

Another good choice of chili to replace serrano is the Hungarian wax peppers. It runs between 1,000 and 15,000 Scoville Heat Units, which is very close to serrano but twice as hot as a jalapeno.

If you are choosing wax peppers to substitute for serrano chili, use them in a little more quantity to spice up your dish.

For stuffing, red or green bell peppers are the best choice you can make. However, they are sweet peppers with nearly zero heat. For this reason, they are often considered to be vegetables. This swap is exclusively for those who cannot stomach anything overly spicy.

While using it as a substitute for the serrano, you can use any variety of them, such as yellow, orange, green, or red bell peppers. Yellow and orange are the sweetest of all.  They work best for stuffing, toppings on pizzas, salads, and even stir-fries.

Also, any of the alternatives to bell peppers may work in some recipes.

I believe that something is better than nothing. When you’re left with no perfect substitution for serrano chili, you can still save your recipe with less agreeable alternatives.

Red pepper flakes have a heat level similar to serrano pepper, and it’s appropriate to use them in salsa and other sauces that call for them.

Banana peppers, which are mild chilies with 5000–10,000 SHU, are another great option to use in place of serrano chili. Use 2 tablespoons of sliced and diced fresh banana pepper for every 1 tablespoon of the former. 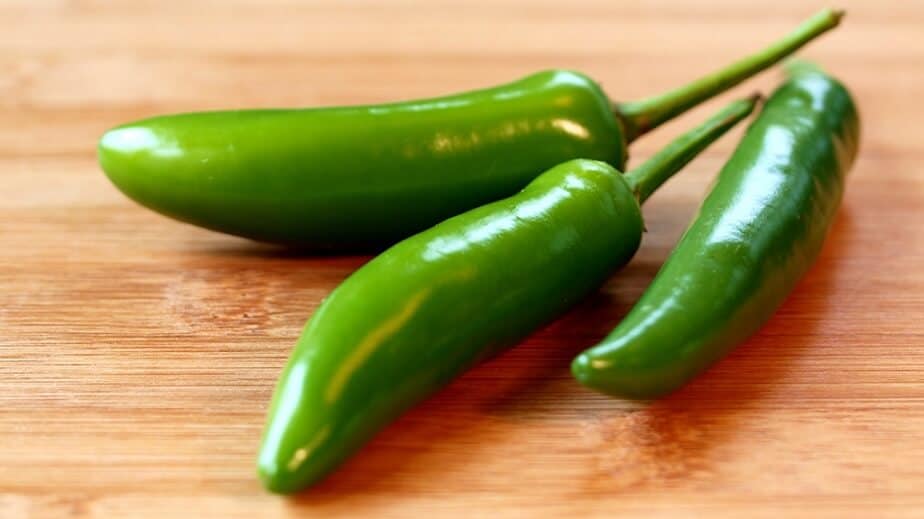 What is the difference between a jalapeño and a serrano pepper?

Serrano peppers are smaller than the former, though they are similar in appearance. Serranos are about 4 to 9 times hotter, which has an average heat of 5,000 SHU. They have thinner skin and flesh than jalapenos. Taste-wise, it has a more intense, earthy, grassy flavor.

Can I use serranos and jalapenos interchangeably?

Yes, you can use them interchangeably. They have a similar flavor, but serrano is a bit more intense. The only significant difference between them is the heat. Just know that serranos are both spicier (3-9x spicier) and smaller. Note that they are not suitable for stuffing, unlike jalapenos.

Can I substitute serrano for poblano peppers?

Is a serrano pepper hotter than a habanero?

Habaneros, scoring 150,000 SHU, are hotter than serrano peppers, and it’s not even close. The Habanero pepper has a minimum of 4 times the heat of the hottest serrano with a chance of 35 times higher heat when you compare the hottest habanero to the mildest serrano.

Which is hotter, cayenne or serrano?

Is Anaheim pepper the same as Serrano?

Serrano peppers are often mistaken for Anaheim pepper as they both have a similar appearance. Serranos are also smaller in size and change colors from green to yellow, orange, and red as they mature. An Anaheim pepper, averaging six to ten inches long, is almost three times bigger. Anaheim ranks from 500 to 1,000 SHU on the Scoville Scale, against the 10,000 to 23,000 hotness levels of the latter.

The serrano chili pepper is closely similar to the well-known jalapeño pepper, identical in color but smaller in size. In the end, Jalapeño chilies are agreeably the most suitable serrano chili substitute. In a pinch, you may also use cayenne chile, Fresno pepper, banana pepper, bell pepper, bird’s eye, wax pepper, or crushed red pepper flakes to replace serranos.