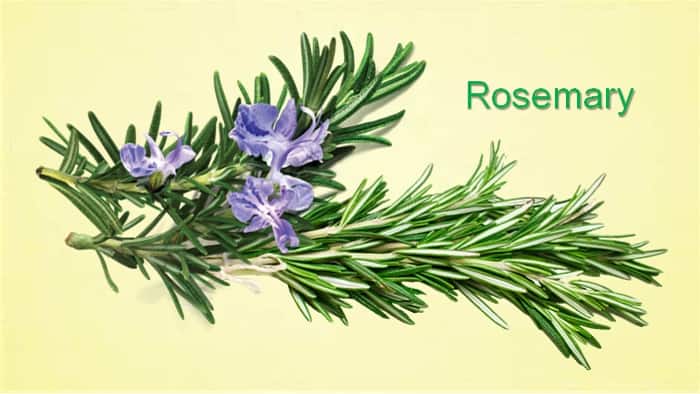 What if you don’t have rosemary for your dish? Is it possible to substitute dried rosemary for fresh?  The answer is here. This article explores the best rosemary substitute that you can use in a pinch.

Rosemary, a member of the mint family, is a fragrant evergreen herb from the Mediterranean. It’s commonly used as a culinary condiment, for its health benefits, and to make bodily perfume.

Rosemary is a strongly aromatic and pungent herb. Its needlelike leaves have a lemon-pine flavor overall. Also, it tastes minty, peppery, and balsamic with a slight butter, woody after taste.

Remember, 1 teaspoon of dry rosemary is equivalent to one tablespoon of fresh rosemary.

To your disadvantage, dried rosemary is brittle and hard to bite thus doesn’t work well as a garnish as fresh rosemary would. In cooked dishes, this alternative is a wonderful option.

Rosemary has a unique flavor that is quite difficult to replace with another herb. Still, there are few good alternatives to try when you badly require a rosemary substitute. Here are the best stand-in ingredients for you:

Thyme is a decent substitution for rosemary. Both of them belong to the mint family of plants known for their delightful aroma and pungency. Thyme produces a similar vibe in your recipe though milder in flavor.

Sage has a strong aroma like rosemary and a pronounced herbal flavor that is an earthy, slightly peppery taste with hints of mint. Notably, both sage and rosemary have some resemblance to a pine-like flavor.

Despite taste differences, both these herbs tend to complement most of the same types of foods.

The strong flavors of sage are dominating thus use it cautiously in your recipes. Sage works well as a garnish for your dish like rosemary would; use thinly minced fresh sage leaves sparingly over your dish.  As a substitute use only ½ the amount of fresh or dried sage for rosemary in cooked dishes.

You can comfortably use sage instead of rosemary in meat and egg dishes.

Marjoram has a flavor similar to rosemary that makes them suitable for interchangeable uses in cooking. Marjoram suits well in most Mediterranean dishes that call for rosemary.

If you are preparing a mushroom dish then use marjoram for seasoning. Also, it’s a good leafy ingredient for salad dressings and tomato delights.

Tarragon is a species of perennial herb in the sunflower family popular for its intense flavor and aroma. The rich fragrance tarragon is a match for rosemary’s aroma but some may not like its anise-like flavor. Obviously, tarragon isn’t a perfect replacement for rosemary, still, in an emergency, it can be used in some recipes. Tarragon goes well with salmon, chicken, rabbit, eggs, and baby vegetables.

Savory is a culinary staple throughout Europe well appreciated for its pleasant aroma and flavor. Savory, both summer and winter varieties, has a note of mint, thyme, and marjoram. The winter savory has a pronounced piney taste similar to rosemary and is commonly paired with sausage, red meats, game, and pates.  Summer savory has a hot and peppery flavor that provides a pungent kick like rosemary.

According to the special flavor profile of your recipe, you can decide upon a suitable substitution for rosemary that will specifically complement other ingredients in the dish.

If your dish contains several strong seasonings then use caraway seed instead of rosemary. Caraway seeds add a distinctive mild anise flavor with a subtle licorice hint to the dish without overpowering other ingredients in the dish.

A combination of peppermint, bay leaf, and thyme is a good alternative to be used in lamb and chicken dishes. Note, the total of the combined ingredients should be equal to the rosemary used in the dish.

You’ll not find a single herb that precisely matches the flavor profile of rosemary. While choosing a rosemary substitute, you should pay attention to the flavors that will best complement other ingredients of the dish. Lastly, don’t be in a hurry to add your substitutes, taste as you progress in cooking and if required add more towards the end of cooking.

What is a good substitute for summer savory?

Look at this list of herbs and their substitutes.

What herbs can I use in place of Bouquet garni?