This spice or condiment is most commonly produced from cayenne-type peppers within the heat range of 30,000 to 50,000 Scoville Units.

Most commercially sold red pepper flakes are typically cayenne pepper heavy and have a neutral earthy, peppery flavor. This crushed pepper mixture is a versatile ingredient that can make any of your dishes instantly hot and spicy; and is frequently used in pizza sauce, sausage, pickling blends, chowders, spaghetti sauce, soups, and savory dishes.

Red pepper flakes are nothing but dried and coarsely ground chili peppers. Believe me, it is super simple to make it at home.

Use any mixture of two more varieties of moderately hot chili peppers. Ancho and guajillo peppers are most commonly used for making them. Jalapeños, Serranos, and Anaheim chilies can also be used. Any good grocery store would have these varieties of chili peppers.

To make an instant blend of chili flakes, simply tear the dehydrated chilies into small pieces and grind them in a spice grinder or blender. Just pulse it at a moderate speed for a few seconds. Then remove the larger pieces; the remaining blend of small flakes and seeds are your ultimate red pepper chili flakes substitute.

To make it professionally, first manually sort the best quality chili peppers and dry them well to the extent of total dehydration (sun drying is recommended).  Secondly, tear chili peppers into narrow pieces and then coarsely grind them in a grinder. If you love the smoky flavor, you may smoke-dry the peppers before grinding. Well, dried chili pepper flakes have better flavor and longer shelf life.

You can also make the chili flakes with any dried chili peppers you have on the kitchen shelf. Grind the peppers into a mix of flakes, seeds, and powder. That is an instant replacement for crushed red chili pepper.

Note that all peppers are not the same because they vary a lot in flavor and have different levels of heat. If you have a comparatively hotter variety of pepper, then use fewer pepper flakes to balance the level of pungency.

To your advantage, cayenne pepper powder is conveniently available in almost all grocery stores. Probably, you already have it because it’s ubiquitously found in almost every kitchen.

Gochugaru is a Korean variant of red pepper flakes mostly used in Korean cuisines like kimchi. Generally, it contains sun-dried long, slim, and mild peppers, made of either red or green peppers. But the seeds are excluded from this blend of peppers, unlike red pepper flakes.

All the peppers used in Gochugaru are peppers cultivated in Korea but they actually belong to the same species of chili peppers of Central American origin.

Gochugaru is milder than regular chili flakes, thus you need to use them in a little more quantity than the crushed pepper flakes.

Chili powder is the dried, pulverized fruit of one or more varieties of chili pepper, some brands of this product also include other spices. Chili powder is popularly used in traditional Latin American dishes like tacos and enchiladas. Like the pepper flakes, it works well for stew, soup, grilled meats, a pot of beans, and vegetables.

In a pinch, if you have chili powder on your kitchen rack, use it instead of crushed pepper flakes.

Importantly, chili powder is mild and doesn’t have the texture of the chili flakes. Also, use any of the alternative spices for chili powder if they are suitable for your recipe.

Fresh, hot chilies (a.k.a. hot peppers or chili peppers) are a great addition to many recipes, especially in vegetable dishes. They have a green, grassy flavor that exudes a good kick of heat.

They differ a lot from red pepper flakes in appearance, flavor, and uses. However, in an emergency, you can use finely chopped fresh red chili peppers as a substitute for chili flakes. This substation works best in recipes that are okay with extra bulk and moisture of the fresh chilies.

If you don’t have red pepper flakes alternatives that I have listed above, then use hot sauce instead.

The heat level of hot sauce can vary according to the peppers used to make it. Always start by adding only a few splashes of hot sauce to your recipe, if required add more midway through cooking. 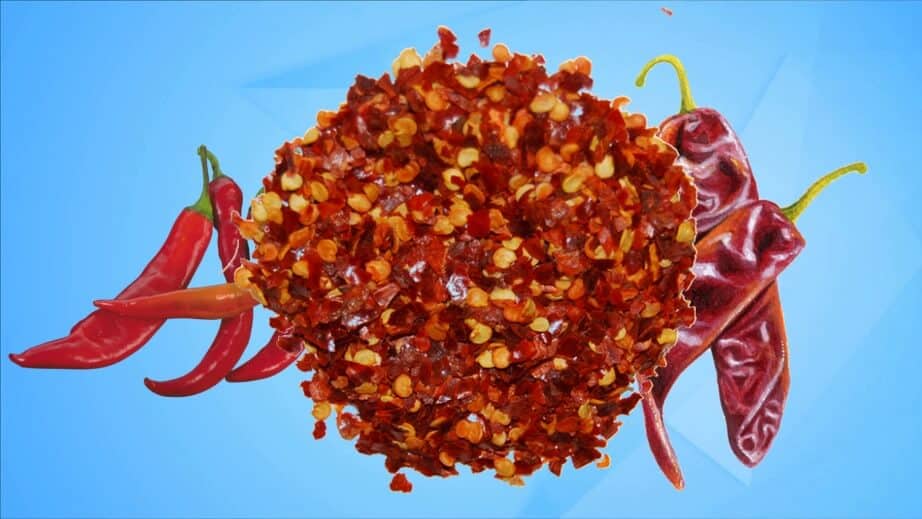 Can you substitute chili powder for red pepper flakes?

If you are just looking to spice up your recipe, then red pepper flakes and chili powder can be used interchangeably. However, flakes are just crushed dry peppers with coarse texture; they need to be ground into powder-like consistency to appear like chili powder. In addition, traditional chili powders also contain other spices like cumin, oregano, garlic powder, and paprika.

Can I use Sriracha instead of red pepper flakes?

Can I use paprika instead of red pepper flakes?

Paprika and crushed pepper are different in texture but both are equally spicy with similarities in flavor. Definitely, paprika is a good substitute for pepper flakes.

What are the differences between chili flakes and red pepper flakes?