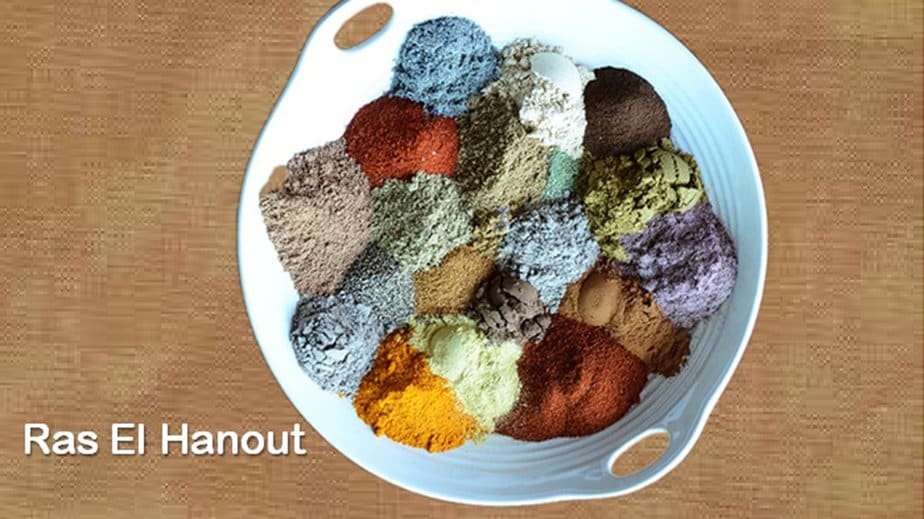 What Is Ras El Hanout?

Ras el Hanout is a Moroccan spice blend. The literary translation of this name is “top of the shop” meaning it is the best spice blend that a spice merchant sells.

There is hardly anyone sure of the ingredients used in this spice blend. They say a traditional Moroccan flavoring blend may contain 50 or more ingredients. Moreover, the spice mix is different from one maker to another, with variations in flavor.

Cinnamon, ginger, and cardamom are the most dominating flavor elements in this spice blend.

Don’t be surprised, it contains even some exotic ingredients like hashish, Spanish fly, and whole Kashmiri saffron stigma. Other ingredients in this mix include almost every common spice that you can think of.

Note that relatively few Moroccans use this spice blend in daily cooking; whereas the majority reserves it exclusively for specialty dishes.

Ras el Hanout is a mixture of many spices with several flavor notes. Therefore, you cannot expect to find a perfect substitute that matches the varied flavor profile of this blend. At the most, what you can use in place of Ras el Hanout is a spice mixture or a customized mixture of spices that nearly matches its flavor and aroma.

What is a good Ras el Hanout substitute that will bring you closest to the original? Here are a few replacement options for you.

For a common woman, it’ll be quite difficult to source all the ingredients that go into this flavoring mixture that contains too many spices and herbs.

However, you can still make Ras el Hanout at home by blending a few of the ingredients that form the crux of this mixture.

Let us only use the barest minimum of ingredients required for making a standard blend.

Measure out all of the ingredients into a bowl, then stir to combine them evenly. Once they are blended well, transfer the mixture into a glass jar and store it in a dry, cool place away from heat and sunlight.

Uprightly, there is no better alternative to this flavoring mixture than making it your own at home.

You may not be a die-hard fan of spicy foods, and your spice rack is always short on spices. Then, in a pinch, opt for a simplified mix of four core spices that dominate the flavor notes of Ras el Hanout. Try a mixture of these four ingredients:

This mixture is not a perfect substitute for Ras el Hanout but provides a pungent kick enough for an exotic flavor. In short, something is better than nothing.

If you notice, this spice blend from the Middle East has all the core ingredients of this mixture.

Baharat is a versatile spice mixture suitable for a dry rub for grilling meat, seasoning lamb, beef, seafood, and vegetable recipes. This mixture is a popular flavoring for North African tagines.

Note that baharat has slightly stronger flavors than the former, and it’s safe to start using smaller quantities while using it to replace the Moroccan blend of spices.

Garam masala is a blend of ground spices originating from South Asia. It literally means “hot spices.” The ingredients in an authentic garam masala mix include cinnamon, peppercorns, mace, cumin seeds, coriander seeds, and cardamom pods. Of course, like every other blend of flavoring blends, this too has different variants for each brand and each cook’s preferences.

The number of spices included in garam masala is fewer than in baharat, but it contains most of the core ingredients found in Ras el Hanout. They all have nearly the same flavor profile. Adding a pinch of ground cayenne pepper would make the garam masala more akin to the Moroccan mix.

Use garam masala in a 1:1 ratio to substitute it.

Five-spice powder is a mixture of five spices often used in many branches of Chinese and Vietnamese cuisines. This Asian seasoning is a mixture of star anise, Chinese cinnamon, cloves, fennel seeds, and Sichuan (Szechuan) peppercorns. According to Chinese food ethos, these five different spices encompass all five tastes—sweet, sour, bitter, salty, and umami.

Most of the ingredients in this mix are also included in Ras el Hanout and they both have similar flavors as well.

In your recipes, you can replace Ras el Hanout with a Chinese five-spice mixture in measure for measure.

Originally, it was an Indian spice blend used mostly in vegetable dishes.

In a pinch, curry powder is an effective stand-in for Ras el Hanout. 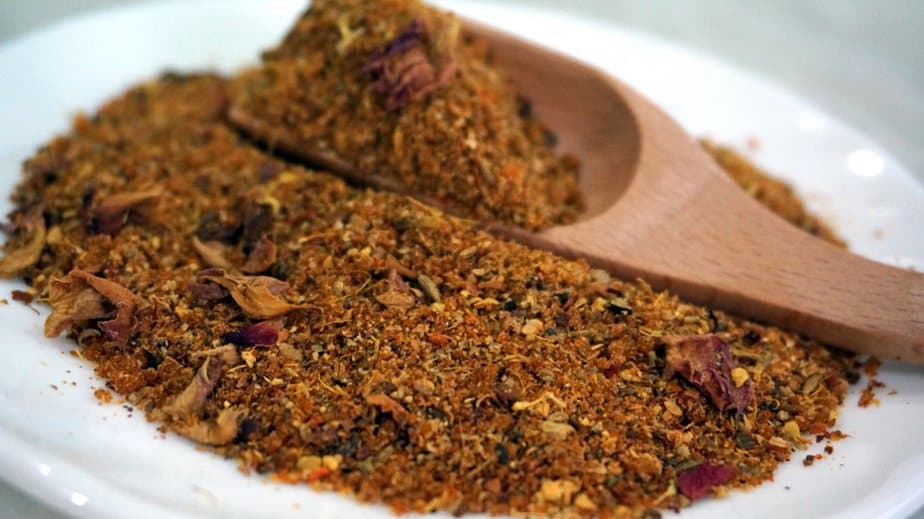 Is 7 Spice the same as Ras el Hanout?

The Lebanese blend of seven spices is made of cumin, paprika, black pepper, cinnamon, cardamom, nutmeg, and cloves. The 7-spice combination is often referred to as baharat and uses the terms interchangeably. It’s spicier and darker than Ras el Hanout. They both have similar uses and work well with poultry, seafood, meat, and vegetables.

Is Ras el Hanout the same as allspice?

Allspice is one of the ingredients often used in simple Ras el Hanout recipe. It’s made from the dried berries of a plant known as Pimenta dioica. Allspice tastes like a combination of nutmeg, cinnamon, and cloves, and it tastes slightly bitter, earthy, and fruity.

What is Ras el Hanout used for?

It’s a precious spice rack in itself and is colorful, aromatic, and rich in flavor. This Moroccan spice is an amazing seasoning blend for savory dishes. It goes well with meat, veggies, pasta, rice, couscous, tanginess, and more.

This seasoning is largely savory and slightly smoky. The mixed flavors of ginger, turmeric, and cumin are the secrets behind its aroma and earthiness. The deep orange color is the result of turmeric, chili powder, and cayenne powder.

What are some typical Moroccan spices?

Moroccan cooking is incomplete without the four basic spices: cumin, black pepper, turmeric, and ginger. Many local recipes may also include other spicy ingredients such as cayenne, paprika, sumac, coriander, saffron, harissa, cinnamon, and white pepper. The ingredients in seasoning blends can vary for different dishes.

It’s difficult to find an exact Ras el Hanout alternative because of its complex flavors and a large number of ingredients. Making a simple spice mixture with the core ingredients in Ras el Hanout is the best alternative option. You may also use one of the other popular blends of spices like baharat, garam masala, curry powder, or Chinese five-spice powder to replace this well-known Moroccan spice concoction.

In other articles here, you’ll find substitutes for other popular flavoring blends such as Jerk, Adobo, and Poultry seasonings.