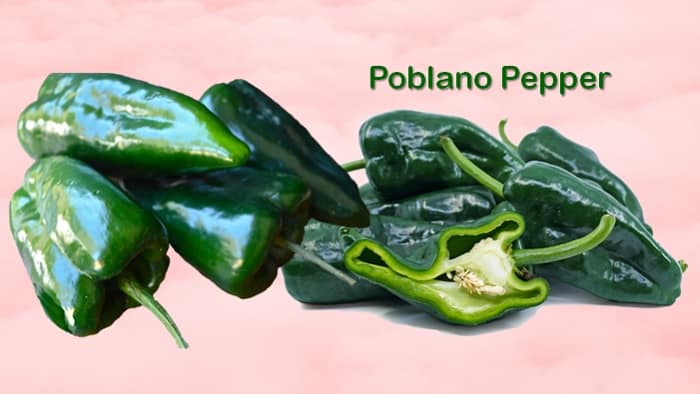 Today, poblano peppers have become a popular ingredient around the world. It, also known as pasilla peppers in some places, is frequently featured in dressings, sauces, dips, salsas, and even cocktails.

Who does not love to relish the bold flavors of adorable, saucy, stuffed poblano peppers with ground beef and rice? All do. Even the roasted poblano tastes amazingly good on its own. This large-sized chile pepper is a key ingredient in many luscious Mexican dishes.

This article explores the best poblano pepper substitute you can use in a pinch.

What to do if you need a poblano pepper substitute? What are the other peppers that can replace poblano? These are some questions many ask, especially in places where poblano isn’t available.

There are decent alternatives to poblano peppers out there that you can very well integrate into recipes that call for it. Let’s now look at a list of the best replacement options.

There’s a considerably higher level of heat in Anaheim, but still, this is the best poblano pepper substitute you can lay your hands on. Most importantly, the thicker outer wall of this pepper is strong and large enough to be stuffed, as poblanos do.

Either green or dried Anaheim pepper will easily fit into most recipes that call for poblano. Be sure of your recipe before using Anaheim chilies as a substitute because they are both hotter and sweeter than poblanos. Preferably, use it in lower quantities than poblano chilies to protect the authentic taste of your recipe.

Cubanelle is a good stuffing-chili the size of an Anaheim pepper but 10 times milder than the poblano. The thinner outer cover of this chili does not give you the ease of stuffing like the Anaheim or poblano. Despite these two drawbacks, it still works as a worthy alternative to poblano for stuffed recipes, Rellenos, and soups.

If you aren’t fond of peppery sweetness, sliced and diced Cubanelle chilies won’t fit into most of the regular poblano recipes. Similarly, if using Cubanelle chilies in place of poblanos, be ready to compromise with their low level of heat. Any perfect substitutes for Cubanelle pepper such as Anaheim pepper, bell pepper, or banana pepper, can also be used.

Ancho chilies, mostly seen in central and south America, are nothing but dried poblanos. It is out of the question for stuffing, but you can swap out minced or chopped poblano peppers with it.

Their smoky taste differentiates them from poblano peppers. If you love to relish the smoky and earthy flavor of this pepper, then it is a great substitute for poblano peppers for sure.

Use this dry spice in lower quantities than poblano, lest your dishes won’t be overwhelmed by their smoky flavor.

Use ancho peppers in lower quantities than poblano lest your dishes won’t be overwhelmed by their smoky flavor.

For stuffing, bell peppers are a great substitute for poblanos as they are large in size with thick walls. Green bells are less sweet than red and yellow bells, so they are a better option to consider.

The downside to bell peppers is that they have zero heat, which makes them unsuitable for recipes that require mild heat like poblano peppers. Only the earthy flavor is what they both have in common. If you prefer non-spicy peppers over poblano-type peppers, then bell peppers are the right replacement peppers for you.

Peppers such as Cubanelle and Anaheim are excellent replacements for bell peppers and they can also be used in place of poblano.

Can you swap jalapenos for poblanos?

Jalapenos peppers are medium-sized chili peppers that are hotter than poblanos. You can use them for stuffing or slice them into small pieces to add to your recipes like the poblanos.

Poblanos are 1,000-2,000 Scoville units of heat but Jalapenos range between 2,500 and 8,000 Scoville; this makes them a less likely substitute for each other. However, it’s possible to reduce the heat of jalapenos to some degree by removing their pith and ribs before cooking them.

Jalapenos have a grassy flavor compared to the earthy note of poblanos. In a pinch, use jalapenos instead of whole or diced poblano peppers, preferably in lower quantities. In case you don’t have jalapenos, peppers similar to jalapenos are serrano, Fresno, and Anaheim.

The Fresno peppers, a close cousin of the Jalapeno peppers, are softer and sweeter, making them a milder poblano substitute. In comparison, it’s fruitier, smokier, and has a thicker skin that gives a bulkier texture to your dishes.

Generally, raw Fresno peppers taste great, especially when they are used in salsas or salads. It’s a smaller pepper, thus unsuitable for stuffing.

While substituting, use around four Fresno peppers in place of each poblano pepper. You may also try any of the alternatives to Fresno peppers.

New Mexico chilies are easily available in the southwestern United States. It’s a lot similar to poblanos in spiciness.

A mixture of grassy and sweet flavors with an earthy undertone makes the New Mexico pepper appealing. When cooked, they have a distinct flavor but are still not so different from the poblanos. This substitute works great in sauces, soups, stews, baked goods, stir-fries, and a few other Mexican recipes.

If you’re looking for a spicy pepper as a swap for poblano, then cayenne pepper is a good substitute worth using. Flavor-wise, you’ll not find any big difference between these two chilies.

Cayenne peppers are one of the most widely available peppers, making them a convenient alternative to most peppers.

Cayenne is a medium hot pepper; use it in ¼ portion of poblanos called for in your recipe. But if you want the recipes to be spicier, then use them in larger quantities. This swap works well in sauces, stews, enchiladas, spicy beans, fried chicken, or even mac and cheese. It can’t be used as a stuffed pepper.

Any of the replacements for cayenne peppers can also be considered in your recipes.

Popularly used in Mexican cuisine, Guajillo peppers are rich in flavor and suitable for making salsas and sauces. They are hotter than poblanos but stay on equal footing with jalapenos.

Guajillos are highly versatile and can be used as dry or fresh peppers, chili powder, or paste form.

They are a good alternative that’s spicier than poblanos; adjust the ratio of their use according to the level of spiciness. Also, have a look at the swaps for Guajillo peppers that can be used in your cooking. 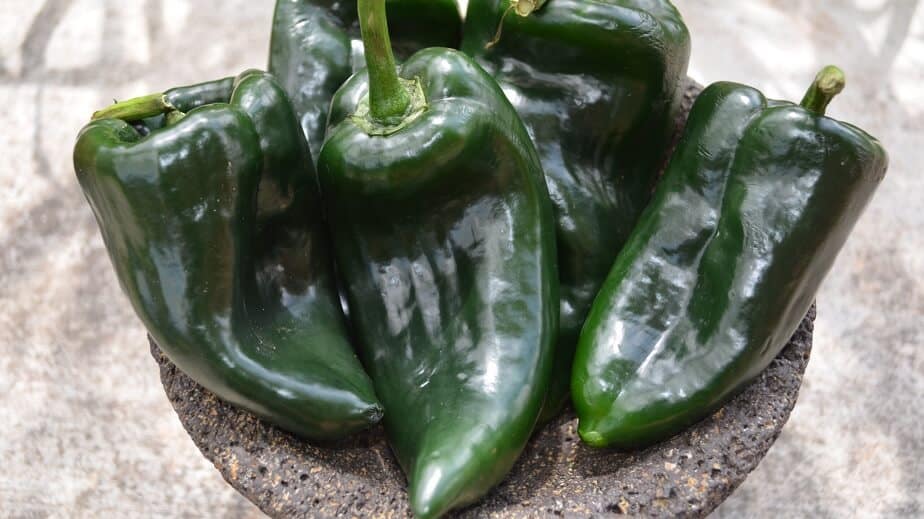 Can I substitute green peppers for poblano peppers?

Green chili is an important star in Indian cooking and it adds so much to a dish both in flavor and pungency. The heat level of green chilies ranges between 25,000 and 100,000 Scoville Units. At their higher ceiling of heat, they can be up to 90 times hotter than the hottest poblanos. Heat-wise, they aren’t a good substitute for mild poblanos; therefore, green bell peppers are a superior alternative.

Are poblano and ancho peppers the same?

They are partly the same but differ in taste and use. Chile ancho is made by drying mature poblano peppers. It’s a dry pepper, and its name is due to its width, as “ancho” in Spanish means “wide.” It is a broad, flat, dried poblano pepper, often ground into a powder and used to flavor a wide range of Mexican dishes.

Is a poblano pepper a bell pepper?

No. The Poblano is a large pepper with mild heat (1,000–1,500 SHU). They are typically larger than bell peppers and are skinnier with a pointy tip similar to Anaheim pepper. Both poblanos and bell peppers are commonly used for stuffed recipes and have a mild sweetness when cooked. Poblanos are quite spicy compared to bell peppers, which have an average heat of 100 SHU or less.

Are poblano peppers a vegetable?

Poblano peppers belong to the Capsicum annuum species of plants and are a type of chili pepper native to Mexico. The typical dark green color and large size of this pepper are more like nightshade vegetables, which include tomatoes, eggplants, and potatoes. However, their heat and flavors are similar to those of peppers in the nightshade family.

From the above list, choose the right poblano chili pepper substitute according to the flavor and level of heat suitable for your recipe.

Overall, Anaheim pepper is the best alternative to use when you have run out of poblano.

If you are looking for something closely similar to poblano in flavor, then ancho chile and bell peppers are your best bet. The spicier options for replacement are cayenne, jalapeno, and Guajillo peppers. In terms of availability, jalapeno, cayenne, and Anaheim peppers are the best picks from the list.