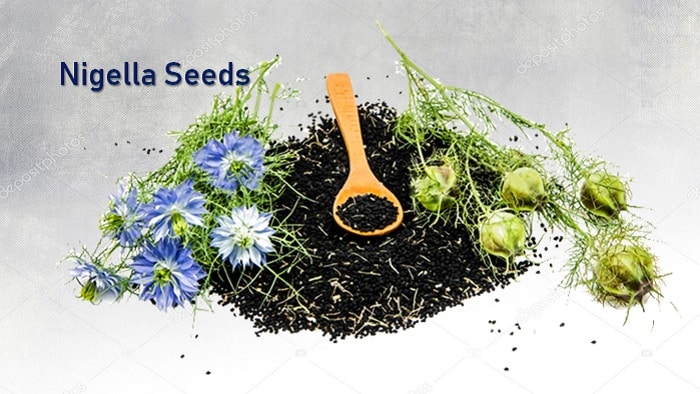 A lightly toasted and ground nigella seeds are a flavorful addition to many foods like oatmeal, yogurt, or smoothies.

It isn’t a common grocery item ubiquitously found everywhere. Don’t worry if you don’t have it at hand. In an emergency, use a nigella seed substitute to manage your recipe without compromising on flavor.

In this article, I’ve got for you a few proven replacement ingredients for nigella seeds.

What Are Nigella Seeds?

Nigella seeds come from the annual plant of the ranunculus family (Ranunculaceae) native to south and southwest Asia. By the way, nigella is more popularly known in other names like black seed, Roman coriander, kalonji, black cumin, black caraway, fennel flower, and many more.

The nigella fruit is a large seed capsule that contains small pear-shaped white seeds – they turn black when exposed to air. The seeds have an appearance almost similar to black sesame seeds.

Basically, it’s a pungent seed used as an aromatic spice and in herbal medicines. Usually, the seeds are dry-roasted before using as this can elevate the smoky and nutty flavor of the seeds.

Nigella seeds have a unique aroma and a nutty, smoky flavor with a combined note of oregano, cumin, and onion. The pungency of onion with a slightly bitter taste is dominant in black cumin. Besides the pungent bang, it offers a complex taste that includes several other subtle nuances of flavor.

How to cook with nigella seeds?  Nigella seeds are used as a condiment and spice in Indian, Middle Eastern, and North African cooking.

For example, some of the dishes like kalonji dal, kalonji pulao, or mint and kalonji paratha are popular Indian recipes that use nigella seeds.

In Indian cooking, often black cumin is sprinkled over baked goods like naan bread before baking. These nutty-flavored seeds are useful for flavoring curries, root vegetable dishes, and stir-fries.

Some of the Middle Eastern foods like nigella seed falafel, carrot salad, and others contain habba souda or habbat al-barakah (Arabic names for nigella seeds) as a key ingredient.

Regrettably, nigella seeds are not easily available in most places, especially in the US.

If you are thinking of making an Indian dish like curry or naan bread then you may want to use black cumin seeds. Don’t fret if you don’t have it. I’ve found a few good nigella seeds alternatives that really work.  Here are four alternatives to use:

Celery is a marshland plant in the family Apiaceae that produces edible leaves, stalks, and seeds. The seeds are about the size of a poppy seed with a dark brown color.

Celery seed is a nice substitute for nigella seeds for it is a great stand-in for the onion and oregano notes of nigella.  They are slightly warm and bitter in taste and equally flavorful as the black seeds.

You can easily replace nigella seeds with celery in most of the dishes that call for nigella.

As they both have the same level of pungency, you can use celery seeds as a nigella alternative in a 1:1 ratio.

The flavor-wise nigella seed has a close affinity to oregano.

However, they both have a very big contradictory factor that one is a herb while the other a seed. Even so, oregano comes closest to nigella seeds in flavor more than any other substitute you can think of.

Note, oregano, being a herb, certainly does not match the texture of nigella seeds. Oregano would add a pale green texture to your dish and it lacks the crunch of nigella seeds as well. Therefore, it may not work in many dishes that call for black seed if the texture is a concern. All the same, there won’t be any problem in replacing kalonji seeds with oregano in vegetable dishes and roasted meat.

Nigella seeds are also known as black cumin and this makes some think that nigella and cumin are one and the same. That’s not true at all.

Cumin belongs to the Apiaceae family of plants that are very different from nigella that belonging to the buttercup family. However, the earthy, nutty, and warm flavor of cumin matches the nutty and spicy qualities of nigella seeds.

The point to be noted, cumin has stronger flavors than nigella seeds and overuse of it can turn your dishes to taste bitter. So, start using cumin in fewer quantities when using it to replace nigella and if required add more near the end of cooking. Use roasted and ground cumin to enhance its nutty flavor.

Black sesame seeds have a lot in common with nigella seeds like the color and appearance. They have a mild, sweet, and nutty flavor and a satisfying crunch when eaten whole.  The crunchiness and nutty qualities of sesame are similar to nigella seeds but lack in pungency and spiciness.

Nigella seeds are a regular ingredient in many Indian and Middle Eastern recipes but not so popular in other places.