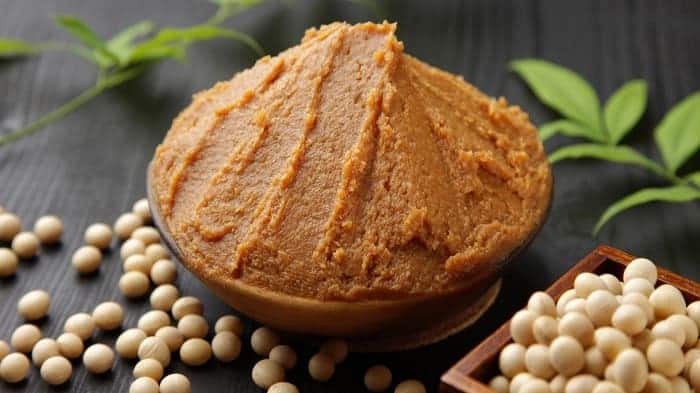 Miso differs from tofu, the former is a thick soybean paste while the latter is a solid white block of soybean curd.

TABLE OF CONTENTS
What Is Miso?
Miso Uses
What does it taste like?
Where to buy and how to store miso?

Miso is a traditional Japanese seasoning produced by fermenting soybeans with other ingredients. It’s an important ingredient used in several Japanese dishes. Miso soup, a staple dish in Japan, is made with miso paste. Usually, it has paste-like texture similar to almond or peanut butter. This paste is made from a fermented mixture of soybean, rice or barley grains, koji, and salt. The fermentation process can last anywhere from a few weeks to some years.

Don’t be surprised to learn that there are over a thousand varieties of miso with different ingredients, flavors, colors, and textures.  The type and quality of the paste are determined by the ingredients used, the period of fermentation, and the methods of culturing and preservation.

You’ll find in the supermarkets typically two main categories of miso white or light miso and red or dark miso. When this paste is made by mixing more than one kind of miso, it’s labeled as awase.

White or light miso has a sweeter and lighter flavor and is yellow or pale sandy in color and is generally used for light dressings and sweets. The light taste is because of the shorter fermentation. White miso contains more grains (like rice or awa) and less amount of soybean.

Dark or red miso contains a higher amount of soybeans and salt for intense flavor and is mostly used in stews and long braises. It’s fermented for few months to several years to produce a stronger, saltier, and funkier flavor. The color of dark miso ranges from light brown to black.

Today, you’ll find several varieties of miso in Japan, in fact, each region is famous for different types of this seasoning. The most popular varieties of miso are Genmai (mellow, sweet, golden miso paste) and Hatcho (a traditional Mame Miso with no grains).

Miso can be eaten raw or cooked. As it’s a cultured food, add it to your dishes towards the end of cooking. Studies suggest that fermented ingredients when boiled, heat will kill active bacteria (probiotic), nixing the health benefits. Usually, this paste is mixed into batters, sauces, soups, and dressings. Some of the common uses of miso include:

Cooking with miso is easy as it already comes ready-to-use right out of the container. Of course, it’s not eaten alone, thus needs preparation for the other dishes in which you can use it.

Most varieties of miso taste tangy, salty, and savory on their own. It adds an umami taste to anything from soups to marinades.

Light or white miso is mild and slightly sweet for they have less salt and more koji. Most varieties of miso have a smooth texture similar to nut butter but some are chunky.

Where to buy and how to store miso?

Miso is often labeled as “miso paste” or “soybean paste.” It’s easily available in Asian grocery stores or supermarkets; look for it in the refrigerator section. Miso is usually packaged in plastic tubes or jars.

While you are buying, carefully read the list of ingredients, preservatives, and stabilizers used. Choose the red or white type of miso according to the requirements of your dish.

Being a fermented product, it needs to be stored in the refrigerator. If stored in the tightly sealed original container, it’ll stay good for a year or more. Darker miso has longer shelf life than light varieties since it had a longer fermentation period. Miso does oxidize but you can prevent discoloring by placing a piece of plastic wrap against the paste.

In short, miso is a Japanese seasoning that is vividly funky and salty; commonly used in a range of Japanese cuisines.  Red or dark miso has a stronger flavor and light miso is mild and sweet. This seasoning has a shelf life of over a year. You can buy it at the refrigerator section of Asian foods stores or the Asian foods aisle in the supermarkets.