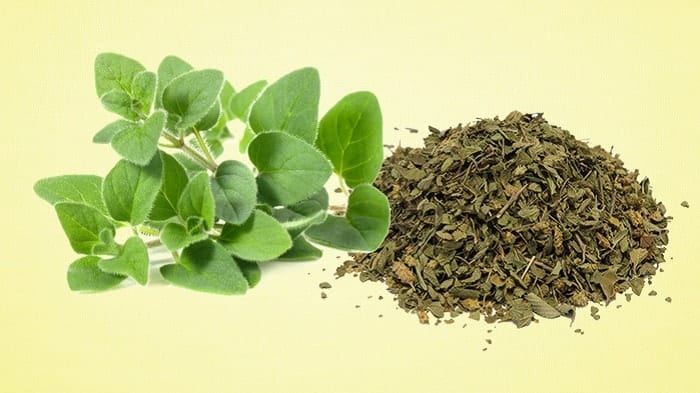 What is Mexican oregano and why do you need it? For any Mexican food lover, it’s really curious to find answers to such questions.

Be it ground beef tacos, chicken posole verde, or red posole, all of them have this peppery herb as a key ingredient in them. Adding a spoon of ground-dried Mexican oregano to back bean soups, charro beans, or Mexican chorizo chili makes a big difference in their taste and aroma. So to say, this herb is an important part of Mexican cooking.

This article brings to you the best Mexican oregano substitutes to use in a pinch and also a little about their flavor profiles and uses in cooking.

What Is Mexican Oregano?

Lippia graveolens is a species of flowering plant in the verbena family, native to Mexico, the Southwest United States, and Central America. It is also known by different names like orégano cimarrón, red-brush lippie, scented mat-grass, or scented lippie.

The Mexican oregano plant has oval-shaped green leaves and small white flowers. It’s a delicious, leafy Mexican herb that’s used fresh or dried in several Mexican dishes. This herb is an annual plant that easily grows in both dry and wet conditions. It is also drought-tolerant. Usually, the leaves of scented lippie are dried and stored for year-round use.

Where to buy Mexican oregano? It’s commonly available in most grocery stores in Mexico, Latin America, and the Southern United States. Also, you can buy any variety of oregano from online vendors. If nothing works for you, then use a Mexican oregano substitute in your cooking.

There are several species of oregano plants belonging to different plant families with significant differences in taste and appearance. Among them, Mediterranean oregano, Greek oregano, Cuban oregano, and orégano cimarrón are the most popular ones.

Italian oregano, considered traditional or regular oregano, is a Mediterranean spice with minty undertones. This oregano, which belongs to the mint family of plants, is the most commonly used type of oregano in the world. Italian oregano is mainly used in Mediterranean dishes like pasta sauces, grilled meats, and pizza.

On the other hand, Mexican oregano is a cousin of lemon verbena with pungent citrus notes and it’s mostly used in Mexican dishes.

In short, Mexican and Italian varieties of oregano come from different species of plants. Italian oregano is mild and slightly sweet with subtle flavors, whereas Mexican oregano has strong, pungent, tangy notes with a subtle licorice undertone.

Mexican oregano tastes citrusy, a characteristic flavor common to all plants belonging to the family of lemon verbena. Like most other varieties of oregano, this one also tastes earthy and grassy.

The flavor profile of Mexican oregano seems to be a natural fit for Mexican cuisines known for their pungent heat and citrus undertones.

A rich, earthy flavor in Mexican dishes is a result of Mexican oregano. In fact, cumin and oregano are the two main herbs used in most spicy Mexican dishes.

The Mexican variety of oregano is a frequently used herbal spice in several Mexican dishes like salsa, tacos, soups, posole, black beans, braised pork, and enchilada sauce. This herb is an all-purpose seasoning that is commonly used in many traditional dishes in Cuba and Latin America.

In most places, home cooks are unfamiliar with Mexican oregano as its use is primarily limited to Mexican dishes only and it is not easily available outside Mexico. If you are cooking a recipe that requires this peppery herb and you can’t get it, then try one of the Mexican oregano substitutes listed below.

The flavor of Mexican oregano is closer to Mexican marjoram than to Mediterranean oregano, which is the true oregano. Marjoram tastes like oregano, but it also has a sweet minty flavor in addition.

A chemical compound called “thymol” present in both oregano and marjoram is responsible for their identical taste profiles, though they differ in other characteristic features.

Marjoram lacks the citrus notes of oregano, thus adding a little fresh minced basil to marjoram is a good idea. A combination of fresh or dried marjoram and basil is a perfect substitution for Mexican oregano.

If this herb isn’t available, you may also use a suitable marjoram substitute in your recipes.

To mimic the citrus flavor of oregano cimarrón, use a mix of Mediterranean oregano and ground coriander.

Mediterranean oregano has a milder flavor than its Mexican counterpart, so when using it as a substitute for Mexican oregano, use it in more quantity or adjust it according to your taste preferences.

Lemon verbena is a nice alternative to Mexican oregano in dishes that call for a citrusy flavor. It’s a good substitute option provided you enjoy the mild lemony scent of verbena in your dishes.

Cilantro is a fantastic herbal spice with a blend of grassy and lemony flavors. Cilantro does not taste like oregano, but its flavors are a lot like the earthy and grassy tones of Lippia graveolens. Cilantro is a manageable substitute for Mexican oregano, usable in some Mexican dishes, especially when you are left with no better options. Also, see if any of the cilantro substitutes will work in your recipe.