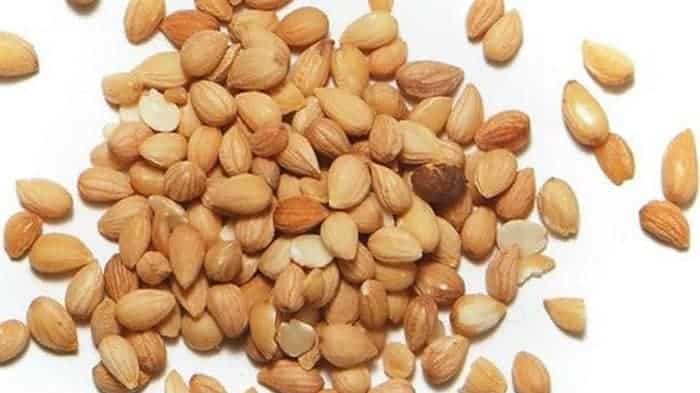 The aromatic mahlab spice is a wonderful ingredient for elevating the flavor of traditional sweets. In Greek baking, this spice is a necessary item in egg-rich yeast cakes and cookies such as Easter tsoureki and Christmas vasilopita.

Mahlab spice is mostly used in Middle Eastern baking and most bakers in the West aren’t even aware of it. This article explores the origin, uses, flavor profile, and substitutes for mahlab.

TABLE OF CONTENTS
What is Mahlab?
What Is A Good Substitute For Mahlab?

Mahleb or Mahalepi is an aromatic spice made from the seeds of a species of cherry, Prunus mahaleb that grows wild in the Middle East. The cherries, also known as St. Lucie’s cherry, are small, measly-looking things with a black fruity flesh and sour taste.

The seed kernel, a soft and chewy substance, is extracted by cracking the mahaleb cherry stones. Then the dried seed kernel is ground into a fine consistency and the mahlab powder is ready for use.

In short, mahlab is the ground beige kernels of mahaleb cherry.

It has sedative and anti-inflammatory properties due to the presence of coumarin in the seed. The vasodilator assets in this spice help to calm the mind and lower tension.

You get to buy mahlab spice as a whole kernel or in powder form. The spice is available for purchase in the Middle East spice aisle of a good supermarket or from online spice vendors.

If you don’t have access to mahlab spice in your area, then use the mahlab substitute we have listed in this post.

The taste of mahlab is similar to a combination of almond and cherry. It is nutty with a delicate almondy sweetness and then the mild bitterness of almonds as well. Initially, mahlab tastes like cherries, a bit like roses, and a good bit like almonds, but the after-taste is dominantly bitter.  The kernel has a floral aroma reminiscent of cherries, also hints of vanilla.

The subtle flavor of this regal spice adds majesty to sweets, cookies, and pastries.

How Is Mahlab Used In Cooking?

Some love to use it in mamool, a Lebanese and Syrian cookie. Ground mahlab is made into a paste with honey, sesame seeds, and nuts, eaten as a dessert in Egypt.

What Is A Good Substitute For Mahlab?

If you are living out of the Middle East, you may rarely find mahlab spice in a grocery store. When you are preparing a Greek pastry or cake, and you don’t have this spice, then you can one of the alternatives listed below:

Mahlab is a lot similar to almonds as they both have mild bitterness and sweet nuttiness. Naturally, almond is the best substitute for mahlab that you should consider, also it’s easily available everywhere. Many bakers recommend using a combination of almond extract and ground star anise to mimic the true taste of mahlab. Preferably, use 2 parts of almond extract and 1 part star anise to replace mahlab spice.

The licorice flavor of anise extract is somewhat similar to the flavor profile of mahlab. You can either buy a ready-to-use anise extract or use a homemade extract. Note, a minimum of two months of maturing is required for the homemade anise extract to achieve its best taste. Use the anise extract in small quantities while using it as a replacement for mahlab.

Apricot kernels are the seeds found inside the stones (pits) of a whole apricot nut. The almond-like taste of apricot kernel makes it a suitable sub for mahlab. Note, you will find two types of apricot kernel, bitter or taste, based on taste. You can use either of them according to the demands of your recipe for baking.

Just like anise, fennel seeds render a licorice note akin to mahlab. Furthermore, a blend of ground cardamom and fennel seeds is a better option to replicate the taste of mahlab. The mild sweetness and floral aroma of cardamom work great in bread, cookies, and pastries.

What is a good substitute for Capers?

What to use in place of star anise?

Best spices that you can use instead of cardamom.