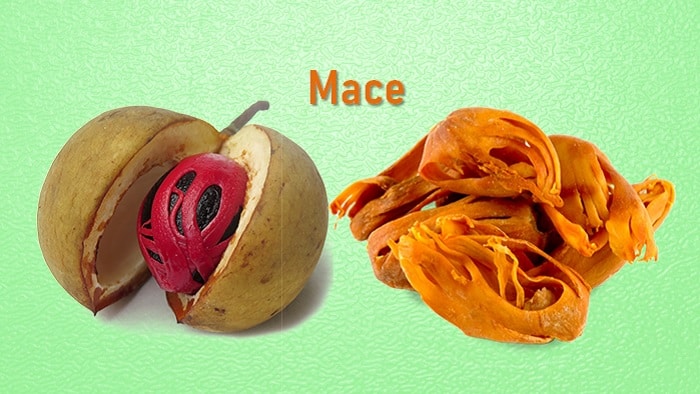 For most home chefs, mace is a rarely used spice. Over and above, it’s a pricy spice that many won’t like to purchase.

If you don’t have mace spice, but you want to proceed with a recipe that includes it, then you have to look for a mace substitute to complete the recipe.

This article examines basic facts on mace spice, including the best replacements to use in its place.

TABLE OF CONTENTS
What Is Mace?
Whole and Ground Mace Differences
Flavor and Aroma
Uses of Mace in Cooking
Benefits of Mace
Best Mace Substitutes
The Bottom Line

The nutmeg tree (Myristica fragrans) is a tropical evergreen tree that produces both nutmeg and mace.

Mace is the lacy outer layer encircling the whole nutmeg seed. In short, it’s the orange or tan-colored skinny layer that encases the nutmeg seed. The outer layer, also called the aril, can be detached, dried, and used as an independent spice.

Usually, from the harvested seeds aril is removed by hand, flattened, and dried in the sun for up to two weeks. Mostly, the dried aril has an orange-brown or amber-yellow color. The flattened and dried aril, also called ‘blade of mace’, is processed into a ground mace.

Mace is available in whole pieces called blades and ground form. As for the authentic flavor, it is better to purchase the blades of mace and grind them just before use.

Spice experts say that the ground mace loses its flavor within a few days like most other spices.

When swapping between whole and ground forms, note that one teaspoon of ground mace is equivalent to one tablespoon of mace blades.

The taste of mace is considered as a less intensively concentrated variant of nutmeg. It gives a mild pungent kick with a woody, sweet, and warm flavor. Cinnamon lovers will relish mace as it has the taste-blend of cinnamon and black pepper.

Uses of Mace in Cooking

The warm note of mace is typically suitable for baked goods. Just like nutmeg, it works well in both savory and sweet foods like cakes, donuts, pumpkin pie, or sweet potato.

Ground mace is mostly used in recipes for better penetration of flavor. To make things easy, the ground mace can be used right out of the jar without needing further processing.

Mace powder is a popular ingredient in many dry spice mixtures. Some foods like sweets, beverages, or porridge taste better when a pinch of ground mace is sprinkled over them.

Most chefs recommend roasting the blades of mace prior to grinding as it wakes up the oil in mace to produce more aroma. Roasting of blades also helps to prevent the oils from clogging the spice grinder.

Mace not only adds a wonderful flavor to your dishes but also renders several health benefits. Rich in Vitamins and also contains iron, carotenes, copper, calcium, and magnesium. However, mace is used in small amounts that account for very few nutritional benefits.

This spice is also known for several health benefits like aiding in digestion and stimulation of appetite. Some researchers highlight its potentiality in clearing digestive tract infections.

It’s often used as a home remedy for nausea, vomiting, and other digestive issues.

Mace is quite an expensive spice that is not easily available everywhere. If you are in a pinch, here are a few good replacements for mace that can save your recipe.

As we’ve discussed above, mace is nothing but a lacy outer layer that covers the nutmeg seed. They both share the same flavor but nutmeg has a stronger flavor. Also, nutmeg has a more concentrated aroma with a distinctive sweetness. In recipes, both can be used interchangeably in sweet and savory dishes.

Undoubtedly, nutmeg is the best substitute for mace; for they are two different parts of the same fruits with similar flavor and aroma.

Replace nutmeg for mace at a 1:1 ratio.

Mace is spicy and pungent like a blend of cinnamon and black pepper. Cinnamon has a sweet and woody flavor similar to mace and nutmeg. Therefore, cinnamon could be a good substitute that you can use in place of mace.

The versatility of cinnamon allows it to be used in both sweet and savory dishes. However, cinnamon is sweeter and has a more robust flavor than mace and nutmeg. For this reason, one teaspoon of cinnamon powder is enough to replace 2 teaspoons of ground mace.

Allspice is the dried brown berry of the tropical Pimenta dioica, native to the West Indies and Central America. This spice is said to taste like a combination of cinnamon, clove, and nutmeg (mace).

Allspice is a wonderful option to replace mace for its nutmeg taste. This spice also has the taste of cinnamon that has s similar flavor profile to nutmeg and mace.

Allspice is a wonderful ingredient for seasoning, desserts, and beverages.

In an emergency, use allspice in place of mace. Use a 1:1 ratio to substitute mace.

Pumpkin pie spice is another suitable alternative to mace as most of the ingredients in it have flavors matching to mace. By the way, pumpkin pie spice is not only for making the pumpkin pie; it works for several other recipes like pancakes, butternut squash soup, maple pecan granola, cinnamon rolls, and many more.

Key ingredients in pumpkin spice are nutmeg, cinnamon, ginger, allspice, and cloves. Here, the first 4 ingredients are standalone substitutes for mace. Therefore, pumpkin pie spice will really do well in recipes that call for mace.

Note, always use spice substitutes in lesser quantities at the start and if required add more at the latter part of cooking.

Mace and nutmegs have similar tastes as they are two different parts of the same nut. Invariably, the best substitute for mace is none other than nutmeg itself.

Other possible mace substitutes include cinnamon, allspice, ginger, or pumpkin pie spice. Choose the right substitute according to the intended flavor of your recipe.

What can I use instead of achiote powder?

What is a good substitute for turmeric?

Can I use mace as a substitute for saffron?

What can I use in place of lovage?