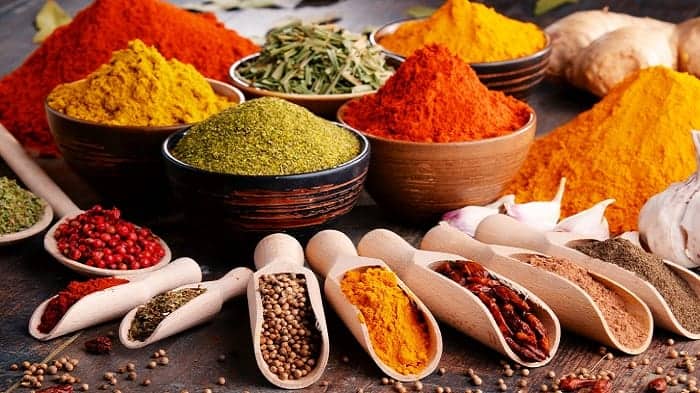 Different flavors of cuisines across the world are influenced by indigenous spices specific to each region. For example, allspice is dominant in Jamaican cooking, cumin and chilies are central to Mexican recipes, ginger and turmeric form the crux of Indian dishes.

The food culture of the world has drastically changed over the years, and now even the home cooks prepare a variety of popular dishes from other regions and countries. A home-cook can’t buy all the spices from different parts of the world, thus using a spice substitute becomes necessary. Also, some dislike the taste of spice or are allergic to some of them.

Choosing the right spice substitute is challenging, as each spice has unique flavors and aroma. However, you can still manage your dish with the closest spice substitutes in consonance with the general taste profile of the dish.

TABLE OF CONTENTS
Spice Substitutes List
How To Substitute Spices?

Every cook should know the best stand-in ingredients for each of the spices used in cooking. Here is the list of 39 common spices and their substitutes:

Asafoetida: substitute a blend of onion powder and garlic powder, a mixture of leeks and fresh garlic, chive, or shallots.

Cinnamon: substitute cinnamon extract, allspice, cardamom, a blend of cloves and ginger, or a blend of nutmeg and cloves.

Clove: substitute nutmeg, allspice, cinnamon, a blend of cardamom and cinnamon, or mace.

Galangal: substitute fingerroot, ginger, lemongrass, or a blend of cinnamon and mace.

How To Substitute Spices?

Here are a few important pieces of information to note while choosing a spice substitute:

Every spice is unique and it’s almost impossible to mimic the original taste of spice with another spice or a blend of spices. At the most, the replacement ingredient possesses somewhat the same aroma and intensity of flavor. Importantly, the alternative ingredient should complement the other ingredients in your dish.

2. Start with Half the Amount

In the case of some spices, it’s just okay to substitute dried ingredients with fresh produce of the same spice or others and vice versa. For example, celery seeds can easily be substituted with fresh leaves and stems of celery. Typically, 1 teaspoon of dry ground spice is equivalent to 3 teaspoons of fresh spice. Fresh spices, especially the whole leaves, stems, or roots, have a significant effect on the texture of your dish.