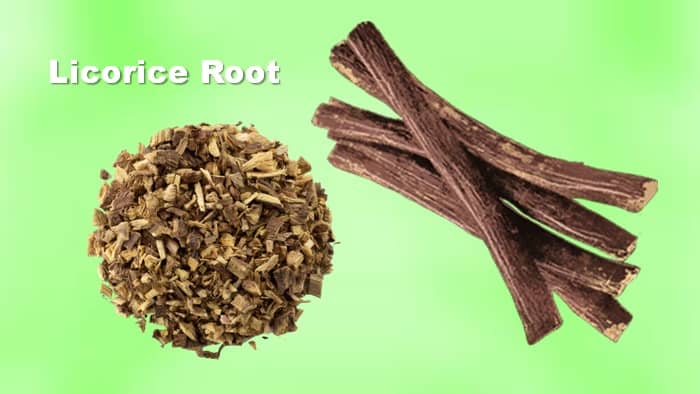 TABLE OF CONTENTS
What is Licorice?
Licorice Root Substitutes

Licorice is a feathery-leafed legume, Glycyrrhiza glabra, which belongs to the same family as pea.

Native to Southern Europe and Western Asia, this plant is mostly used in traditional medicines for various diseases and flavoring.  With its increasing popularity, now licorice cultivation happens across the world.

In the medical world, some confusion and controversy exist on the famed health benefits and for its infamous health dangers.

Usually, you get this root in a grocery store or hypermarket as a loose herb, powder, or liquid extract.

This article examines the benefits, uses, and substitutes for licorice root.

By the way, glycyrrhiza glabra is not botanically related to fennel, anise, or star anise which have similar flavoring compounds.

The extract from its root is commonly used for making licorice-flavored candy, especially in Europe. Also, it is excellent for flavoring root beer, and tobacco.

This root herb is a popular confection usually flavored and colored black with the extract from licorice root.

Glycyrrhiza glabra isn’t a common plant found everywhere. It may become necessary for you to find a substitute for licorice when making candy or licorice tea.

Here are some of the best replacements for licorice that has similar flavor profiles.

The best replacement for licorice is none other than licorice extract that actually contains a tincture of licorice root. Usually, ethyl alcohol assists in extracting a tincture from the root.

The unique flavor of licorice root is exactly present in the tincture. The extract is highly versatile and easy to use in baked goods, candy, or homemade root beer.

Every good baker’s shop usually has licorice extract, if not you can easily purchase it online.

Anise also called aniseed or rarely anix is a flowering plant in the family Apiaceae (parsley). The flavor and aroma of anise have a very close similarity to licorice.

Very often, anise and licorice root are used interchangeably for flavoring, especially in confectionery making. You can very well replace licorice with anise seed in desserts and alcoholic beverages as well.

A compound called anethole is responsible for producing similar flavors in anise and licorice.

Surprisingly, some of the so-called ‘licorice candies’ are actually flavored with anise instead of licorice.

Anise extract also works as the seed and is usable in place of licorice root extract.

First of all, don’t confuse star anise with anise, both of them are different species of herbs. Star anise is the seed pod from the fruit of the Illicium verum plant, mostly found in Southwest China. The seed pods have the shape of a star.

What makes star anise a good substitute for licorice root is their strikingly similar flavor profile. Again, the compound anethole is responsible for the similar taste of these two herbs.

Use star anise in all recipes that call for licorice but not vice versa.

Sambuca is an Italian anise-flavored, usually colorless, liqueur. Most varieties of Sambuca contain essential oils obtained from star anise as the flavoring agent. Unofficially, most brands of Sambuca also include elderflower, licorice, and other spices.

Adding a little Sambuca to some of the alcoholic beverages, desserts, and cake renders a mild licorice flavor.

As a substitute, use Sambuca in place of licorice in recipes that tolerates an alcoholic ingredient.

Is licorice root a good substitute for fennel seed?

What can I use instead of caraway seeds?

What is a good substitute for mahlab?

Can I use caraway seeds as a substitute for cumin?

What kinds of herbs and spices would work in your recipes?