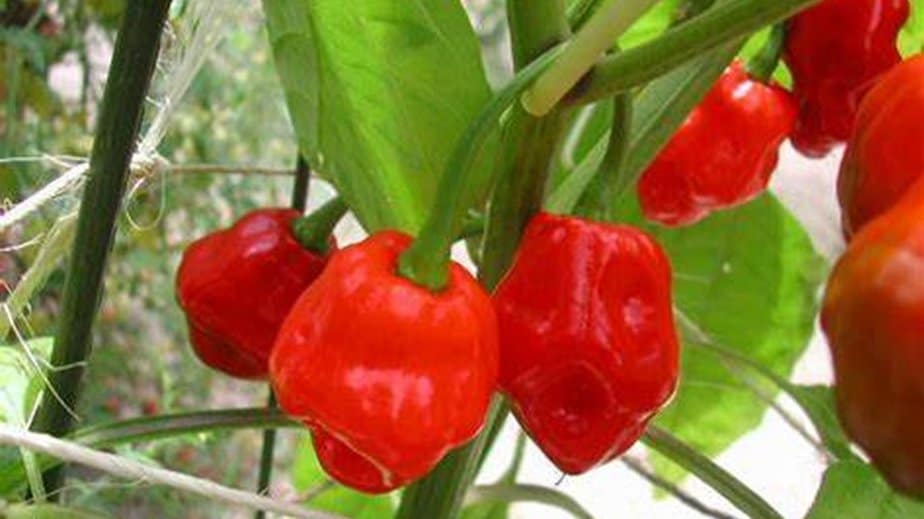 What are Jamaican Hot Peppers?

The Jamaican hot pepper is a traditional hot chili from Jamaica and is much loved around the world. It belongs to the Capsicum Chinense species of chiles in the Solanaceae or nightshade family.

This attractive wrinkly pod is a special variety of chili that packs a punch similar to the Scotch Bonnet and Habanero.

The peppers grow on a compact plant with dense foliage. Depending on the variety, the lantern-shaped or squash-shaped pods come in different colors but the red hot peppers are the most popular ones. In appearance and flavor, they are nearly close to the Scotch Bonnet peppers. What’s most enchanting is its extreme heat laden with a sweet apricot and citrus flavor; also it has a smoky undertone.

Each variety of Jamaican hot peppers offers a unique flavor and they’re an ideal ingredient for making spicy condiments.

It’s an extremely hot chili with the heat level ranging between 100,000 to 200,000 SHU on the Scoville Scale. In terms of heat, this pepper is on an equal footing with Habanero and Scotch Bonnet.

This Jamaican pepper can be up to 40 times hotter than common Jalapeno peppers at an average heat of 5,000 SHU. In comparison to Scotch Bonnet (100,000-350,000 SHU), the hottest Jamaican red hot pepper equals the average heat of the former, and the same goes for Habanero peppers as well.

There are a few varieties of Jamaican hot peppers and the biggest difference between them is the color. Also, they vary in heat level but flavors remain almost the same for all varieties. All these varieties are very similar to the Scotch Bonnet Peppers and they come in different colors such as red, yellow, orange, and chocolate on ripening.

These peppers are easily distinguishable in a crowd. They all have unique shapes; look like small squash or lantern and consist of thin and juicy skin.

Jamaican Hot Red: A squash-shaped pepper with thinner skin that ripens to bright red. The red peppers are slightly spicier than other varieties.

Jamaican Hot Yellow/Orange: Share the same features as red pepper but these two varieties are slightly milder but fruitier. On ripening, they turn to bright yellow/orange.

Jamaican Hot Chocolate: Squash-shaped peppers that ripen to a rich brown (chocolate) color; have a more ribbed and wrinkled skin than others and have a resemblance to prune. They grow 2 inches long and have a very spicy Caribbean flavor.

The Jamaican hot peppers are harvested when they are sufficiently matured with deep green or ripened into other colors. Usually, after transplanting it takes about 10-12 weeks to have the peppers ready for picking.

Among all the different varieties, the red and yellow versions are the most popular lot of Jamaican hot chili peppers.

The peppers grow on a compact plant that produces an abundance of pods. Look-wise, they are similar to Scotch Bonnet peppers; the pods are about 5 cm long and 2-3 cm in diameter. The pods look like squash or mushrooms and are thin-skinned, have a medium thick flesh, and their inner cavity is filled with a few flat, oval-shaped cream-colored seeds. They change color from green to red, yellow, orange, or chocolate, depending on the specific variety.

The flavor of the Jamaican hot peppers can be compared to Scotch Bonnet or Habanero peppers. They offer a unique fruity flavor with a hint of smoky and citrus undertones. The heat they produce is great and delicate souls might find them to be unbearably spicy.

The Jamaican hot red peppers are an important hot spice in Caribbean cooking. The fiery heat and fruity flavor make this pepper excellent for making hot sauces, marinades, and soups. The peppers are often sun-dried or smoke-dried and ground into hot flakes and chili powder, and a pinch of it can make any of your dishes instantaneously spicy with a fruity, smoky flavor.

The pepper pairs well with zesty ingredients and are excellent for making hot salsas. Most Caribbean homes keep pickled Jamaican hot peppers in stock to spice up their traditional dishes.

Note that these peppers are extremely hot with a high density of capsaicin; highly potential enough to cause severe chili burns. Always wash your hands thoroughly after handling this pepper while harvesting or cooking. Immediately after touching the peppers, do not touch your eyes or nose with your hands. It’s safe to wear gloves and kitchen goggles while you are cooking with this pepper. 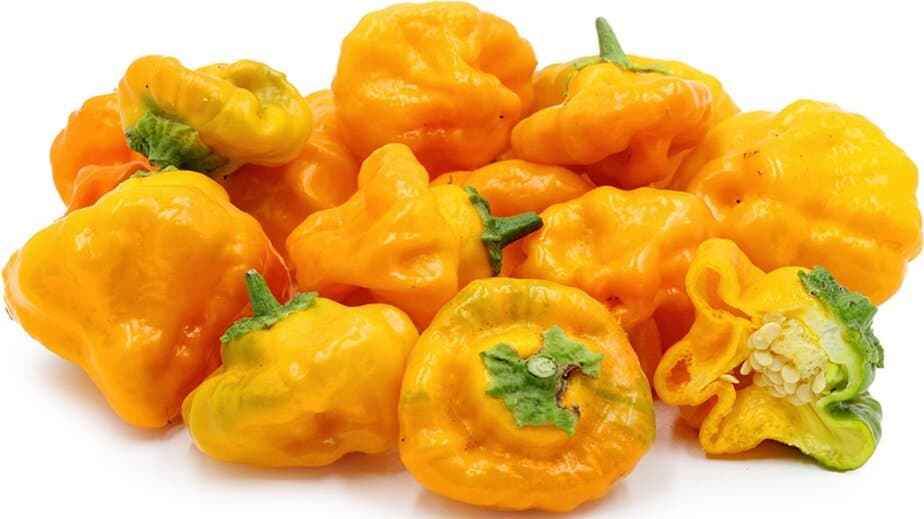 What is a Jamaican hot pepper used for?

They are great for use in hot sauces, salsas, and marinades. These peppers are often used for flavoring spiced puddings, hot snacks, and hot stews. Also, they are great for making hot pickles and chili powder/flakes.

They are squash-shaped but some variants are mushroom or lantern shaped. They have ribbed, wrinkly, thin skin with a few crevices all over. The tender peppers are green but on ripening, they take different colors like red, yellow, dark brown (chocolate), or orange depending on the particular variety of the plant.

What is Jamaican hot pepper shrimp?

For further reading, also have a look at all the important details of two other popular Caribbean peppers Devil’s Tongue Pepper and Chocolate Habanero in other articles here.