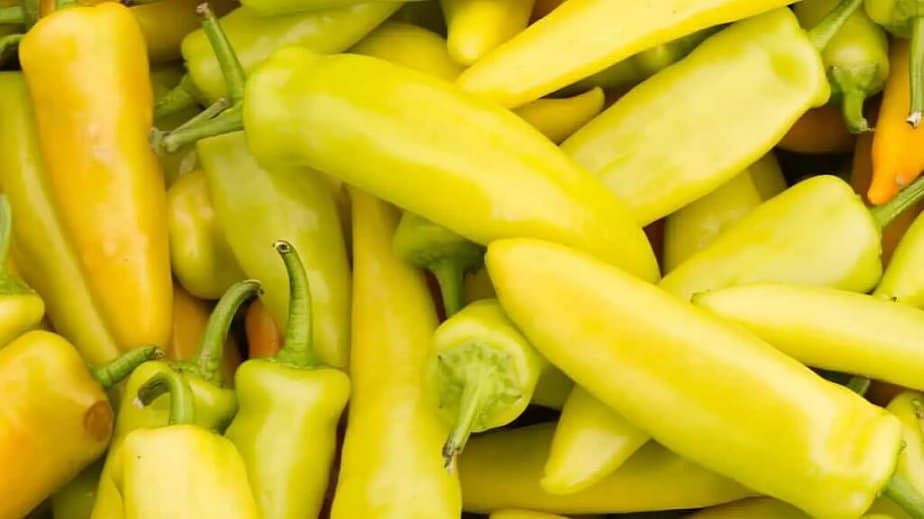 The Hungarian wax pepper, a cousin of banana pepper, is excellent for cooking because it isn’t terribly spicy like the habaneros and is large enough for stuffing.

I’m sure that you’ll enjoy sajtos töltött paprika, a popular cheese-stuffed wax-pepper dish from Hungary. There are also several other recipes with this yellow pepper that are often served as an appetizer, meatless Lenten, side dish, or vegetarian main course.

In Hungary, this pepper has cultural and historical significance as well.  They are very important food and economic crop and were even used as a currency in bilateral trading in the middle ages. Today, this Hungarian heirloom pepper is popularly planted in the U.S. and warm-climate regions across the globe.

CONTENT
What Is The Hungarian Wax Pepper?
Origin And History
Hungarian Hot Wax Pepper Scoville
What Do They Look And Taste Like?
Uses In Cooking
FAQs

What Is The Hungarian Wax Pepper?

The plant grows about 3 to 4 feet in height and features 4-6 inches long tapered, medium hot peppers. The pepper remains yellow till maturity and adorns orange-red color when ripened. The ripened red peppers are spicier than when they are yellow.

The pepper, also known as Hungarian Hot Wax Pepper, is confusingly similar to the banana pepper in appearance but is much hotter. Because of their similarity, this pepper is often called “hot banana pepper” or “hot yellow pepper”.

This pepper is popularly known by the Spanish name “chile hungaro’ or “chile guero” (the generic Spanish name for yellow peppers).

Today, it’s one of the most commonly cultivated and used peppers in Hungary, Croatia, Central Europe, and many parts of the Americas.

Chili peppers were first introduced to Central Europe in the mid-sixteenth century from North America; soon they became a staple in Hungarian and Serbian cuisines.

The Hungarian climate and soil proved to be excellent for growing chili peppers. Over a long period of cultivation, two naturally divergent versions of chili pepper cultivars became popular in Hungary, namely the Hungarian banana pepper and the Hungarian wax pepper. Currently, they have become very popular in Central Europe, England, the United States, and many regions of Asia and North America.

The Hungarian wax pepper was perhaps the first pepper to be used for making paprika (a spice made from dried and ground red peppers). By the way, “paprika” is a Hungarian word that literarily means “little pepper”.

The yellow wax peppers look like banana peppers (500 SHU) but they are several times hotter. Generally, on the Scoville Scale, the yellow wax pepper clocks in between 5,000 to 10,000 SHU. However, some variants of the wax peppers have reached up to 15,000 SHU but some may go down to as low as 1,000 SHU. That’s a pretty wide range.

If you are comfortable eating jalapenos, then you’ll also find in this pepper an enjoyable heat though some variants might reach up to the median heat of serrano pepper (10,000-23,000 SHU).

Hot wax peppers change their color from yellow to orange and then red when fully ripened. They are large in size; they grow up to 6 inches long when they reach maturity. The peppers have nearly half the thickness of poblano peppers. They’ve got a plumper pepper shape, actually quite like a banana.

The yellow wax peppers are sweet with a slight tanginess and have a moderate level of enjoyable heat like the jalapenos. They are tasty even when eaten raw. It’s a highly versatile pepper, just like the jalapeno it goes well with most recipes that call for medium hot chilies.

The Hungarian wax pepper is commonly used when it’s still yellow, before ripening. The yellow pepper is less spicy but equally flavorful as the ripened peppers.

Many of the traditional hot Hungarian recipes like goulash, porkolt, and paprikash will be incomplete without this chili pepper. It has a moderate thick flesh suitable for pickling; and it’s one of the most popular chili pickles, especially in Central Europe.

The pepper is an excellent addition to mole sauce, stews, soups, and dips. Many love to stuff them with cheddar or cream cheese, sautéed and served as an appetizer.

Just slice up the fresh peppers into rings and use them to garnish your salad. Also, this pepper is great for roasting, grilling, and stuffing. You can also make your chile Rellenos spicy by substituting the regular poblano peppers with Hungarian hot yellow peppers. Add this pepper to marinades, sandwiches, stir-fries, and any hot dishes that you are making.

You can temper down the heat of the pepper by removing the inner membrane and seed before cooking. To avoid chili burns, it’s good to wear kitchen gloves and goggles while you are preparing the chili peppers to be used in your dishes. 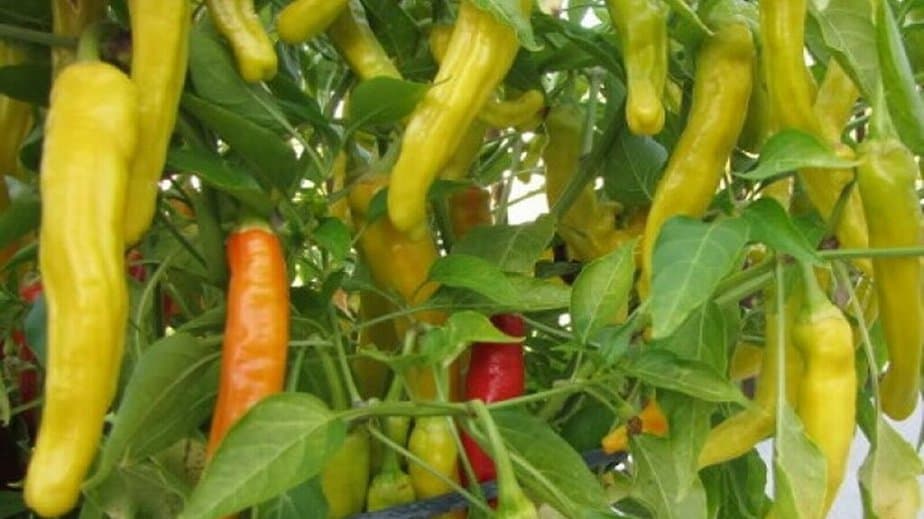 What peppers are similar to Hungarian wax peppers?

The wax pepper originating from Hungary is a highly versatile pepper with numerous uses in cooking. The banana pepper comes very close to this pepper in appearance and flavor but lacks its spicy punch. Pepperoncini peppers are mild like banana pepper but they have a texture and flavor similar to hot yellow wax pepper. Cascabella pepper with fruity, sweet flavor and heat similar to Jalapeno is also a good substitute for hot wax pepper.

Where can you buy Hungarian wax peppers?

Fresh wax peppers are easily available in Central Europe and many specialty chili farms and supermarkets in the US. You can source the pickled yellow wax peppers from online sellers or specialty grocers, but don’t mistake it with banana pepper pickles. If you use these peppers often, better to buy the wax pepper seeds from online seeds sellers and grow them in your garden.

How to store hot wax peppers?

The yellow wax peppers will last for about ten days if they are normally stored in the fridge. Obviously, the pepper has gone bad when its skin loses the waxy texture and becomes wrinkly and soft. You can preserve this pepper for long by freezing, pickling, or in brine (a mixture of water, vinegar, and salt).

The fresh way peppers are sweet with a mild citrusy tang and taste great even when eaten raw. You can eat the peppers raw with your pizza or salad, even using the thinly sliced peppers as toppings on grilled meat, seafood, and vegetables will be tasty as well.

The wax pepper stays yellow throughout its growth period but when matured it takes on an orange hue for a while and then it ripens to red within a few days. It’s spicier when matured but most often this pepper is harvested early for mild pickling stock and other uses in cooking.

Are wax peppers the same as banana peppers?