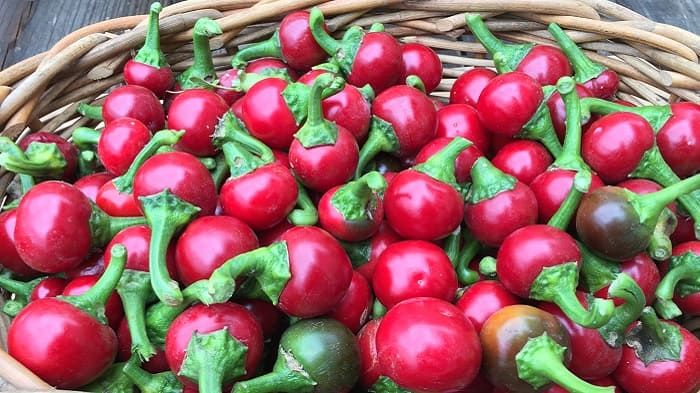 Cherry peppers are small, round, and red chile peppers that appear like red cherries. They are also known as bomb peppers or hot cherry peppers but they are moderately hot peppers contrary to the names. They taste best when pickled and used as a condiment.

What Is Cherry Pepper?

Red cherry peppers, botanically classified as Capsicum annuum, are small, rounded pods that belong to the Solanaceae or nightshade family. They are known in different names such as sweet cherry chile pepper, cherry bomb, hot cherry pepper, or the Hungarian cherry pepper. The attribution “cherry” added to this pepper is associated with its resemblance in color, shape, and size to red cherries and cherry tomatoes.

They have uniform pods, averaging 2 to 7 centimeters in both diameter and length, and are round to slightly ovate in shape. The outer skin is smooth and glossy, ripening from green to dark red when fully ripened. They are thickly fleshy and aqueous and have a central cavity filled with many flat, round, and cream-colored seeds.

Cherry chile peppers have a spicy profile though the name evokes a sense of sweetness.  The thick skin and fleshy texture make this pepper excellent for pickling.

There are a few varieties of red cherry peppers in different regions with varying degrees of heat. A broad classification of this pepper falls into two categories, sweet and hot peppers with different ranges of heat.

It is difficult to distinguish between the different types of this chile by appearance because all of them look the same. All varieties of cherry pepper have thick flesh and bright red color. The spiciness of chile varies according to the climate and soil it is grown in.

The most popular varieties of them are cherry bombs, fireball, red hot cherry, and cherry stuffer.  The cherry bomb is the spiciest and the cherry-pick is the sweetest variant of this chile. In the Caribbean, you’ll find the moderately hot version of this chile called moniker wiri-wiri.

How Hot Are Cherry Peppers?

The tiny size and cherry-like appearance of this chile are deceiving for most verities of them are considerably spicy though you may expect them to be sweet. They pack a good bit of heat despite their miniature size. The heat level of cherry pepper is similar to the average jalapeno, reaching up to 5,000 SHU on the Scoville Scale. However, the sweet version of this pepper like cherry pick and cherry stuffer is less spicy with their heat levels falling below 2,500 SHU. Whereas, hot cherry peppers like cherry bombs and fireballs have heat levels reaching up to 5,000 SHU.

In general, cherry peppers have a bright, sweet-tart flavor with a moderate level of spiciness. Each bite gives a crunchy and juicy feel, in other words, crisp with watery flesh. The spiciness of this pepper comes close to jalapeno or cayenne peppers; produces a gentle burn on your palate that won’t go above 5,000 Scoville Heat Units.

Unlike most other peppers, they have tough skin and pods filled with thick and juicier flesh; an ideal pepper for pickling. They can very well absorb the preservatives like vinegar without losing the crunchiness.

How To Use Cherry Peppers?

Like every other pepper, hot cherry peppers can be added to a variety of spicy dishes. A side of pickled pepper is an excellent addition to a range of dishes, especially fatty foods to give them a little mouth-tingling pop to help break down the richness. Crushed peppers, raw or dry, can be used as toppings on cooked dishes or while frying the dishes. Red cherry peppers are at their best when used as a pickled condiment in sandwiches, atop salads, or on cheese boards.  Fresh peppers can be diced up or tossed into an omelet or mixed in with ground beef used in burgers or meatballs. They can be stuffed with cheese and meat and cooked, smoked whole for a deep smoky flavor. You may try to cook them down to make pepper jam, jelly, and chutney. In short, red cherry peppers in green or red can be used raw or cooked in applications such as roasting, grilling, and baking.

The inner membrane and seeds of the peppers are intensely spicy thus you may remove them to tone down the heat.

There is less chance to find fresh cherry peppers in the vegetable section of a supermarket but most higher-end groceries would carry a jarred pickled version of the pepper. In the late summers and early fall, you may find fresh raw cherry peppers at your local farmers’ market; especially in places where this pepper is widely cultivated.

The best place to store fresh peppers is the refrigerator. Simply place them in a plastic bag or storage box and keep them in the vegetable drawer of your refrigerator. The optimal temperature is between 40-45°F to keep them fresh for a few weeks. Pickled cherry peppers in sealed jars can stay good for 2 years but once opened they may last only for a few months.

Pimentos and cherry peppers have a similar appearance and use. However, pimentos are a lot less spicy and sweeter than the other. Red Cherry chile peppers are spherical while pimentos are heart-shaped. Pimentos have a softer outer layer compared to the crispier texture of cherry bombs. Both of them have a similar level of juiciness and fleshy texture.

They have similar flavors with only some subtle differences and they can be used interchangeably in most dishes. In fact, pimentos are the best substitute for cherry peppers and vice versa. 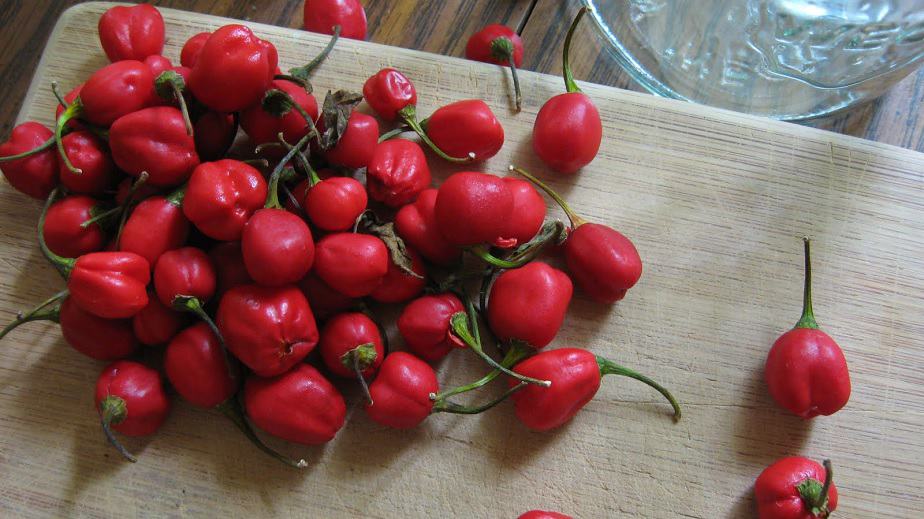 Are cherry peppers hotter than jalapeno?

Cherry peppers look like sweet red cherries, but they are somewhat spicy. Compared to their small size, they are highly spicy; perhaps the reason why they are also called “cherry bomb peppers”. They offer a heat similar to average jalapeno peppers, going up to 5,000 SHU on the Scoville Scale.

Can you eat cherry peppers raw?

Cherry Bomb peppers can be eaten raw or cooked; raw chilies are good for making hot salads and pureed chili sauces. You get to buy cherry peppers fresh, dried, pickled, or canned. Raw peppers come in different colors such as red, orange, and green.

Are banana peppers and cherry peppers the same?

No. Banana peppers, also known as banana chilies or yellow wax peppers, are mild peppers that come in shades of bright yellow to pale green. The cheery bomb is different from banana pepper in appearance, flavor, and uses. But cherry peppers are more like pepperoncini as both have similar flavors and are great for pickling.

Where do cherry peppers grow?

In the US, the cherry bomb pepper grows best in areas where the soil hardiness zone ranges between 9 and 11. The plants themselves usually do not grow higher than 24″ and are well-suited for container and open-field growing. The pepper seeds should be sown indoors approximately 8 weeks prior to the last frost of the spring.

Can you freeze cherry peppers?

You can freeze cherry peppers like all other hot peppers. In fact, before freezing they require minimal preparation and no blanching. Usually, the frozen peppers will turn slightly soft after thawing, thus they are more suitable for cooked dishes.

How long does it take for cherry peppers to ripen?

The cherry peppers become ready for harvest approximately 80 days after transplanting. The mature green fruits will turn bright red and ripe in about 100 days.